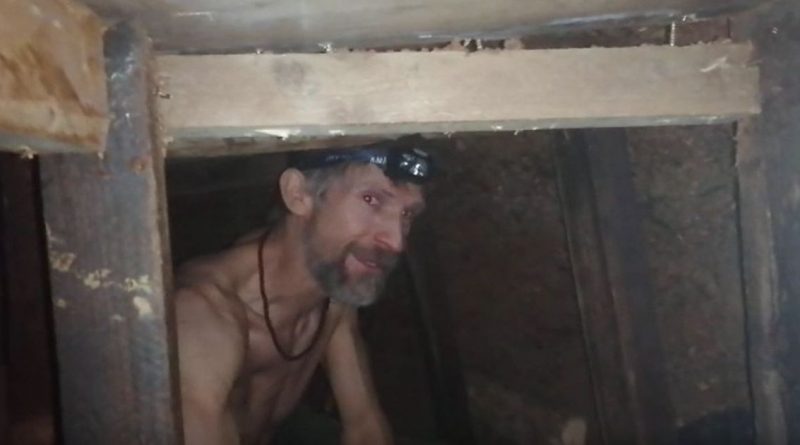 HS2 protesters preparing to spend a night in a hand dug tunnel has led to a tense stand-off with bailiffs.

A handful of activists, believed to include infamous eco warrior Swampy, say they are prepared to stay underground in tunnels they carved.

They claim they may stay down there indefinitely as an operation to remove them from a park near Euston station stalled.

The 100ft secret tunnel network sits underneath London, and spent months to complete.

Tunnellers worked 'around the clock' using shovels, buckets and pickaxes to create the network, code-named Calvin.

The tunnels are reportedly supported by wooden joists and boards to prevent collapse.

Police are in place at the park as well as enforcement agents from HS2's private contractor.

The tunnel cannot be seen above ground, as a large wooden structure has been erected in the park.

Tents and wooden platforms have been put up high in the trees in the square.

One protester, named Larch, was in the shaft, waiting to enter the tunnel.

Larch, 48, from the East Midlands, said: "I’ve been working in academia for 25 years, have written several books and published academic papers.

"Now I work full-time on this. Are you going to stand by while the world burns?

"I’m actually going a little lower as we speak.

"Obviously no one would ask to be underground.

"But also we didn’t ask to be in a climate emergency.

"I’m scared of not having enough access to sunlight, of not seeing my partner or friends.

“But most of all I’m scared of the way the bailiffs are going to carry out the eviction.

"There are three others in the shaft with me and I don’t know who’s in the tunnel.

“It was about 9 feet 4 inches deep when I measured it.
"I will spend as much time down here as it takes to stop HS2.”

The group claims that the planned HS2 line, due to link up London, the Midlands, the North of England and Scotland, will see 108 ancient woodlands "destroyed" and "countless people being forced from the homes and businesses".

HS2 Ltd said only 43 ancient woodlands will be affected by the railway's route between London and Crewe, with 80% of their total area remaining intact.

A spokeswoman for HS2 Ltd told Mirror Online the company could not comment on the specifics of protesters' activities as it is yet to take possession of the land, but that "illegal" actions could be a danger to people's safety.