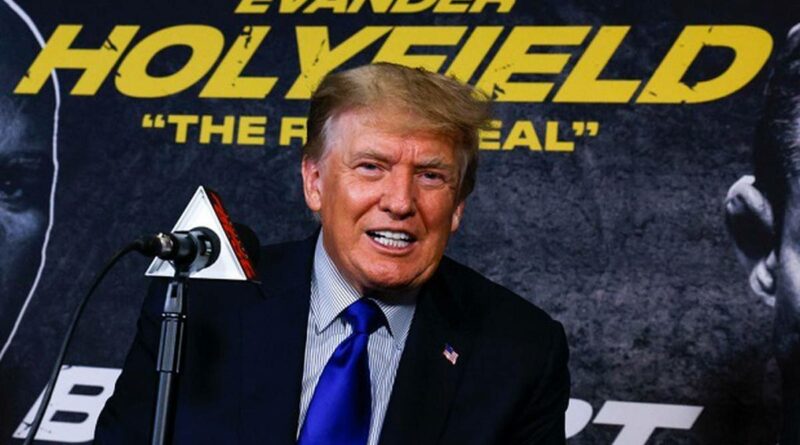 Donald Trump has overshadowed the undercard of the Evander Holyfield fight night after his bizarre appearance on the live TV broadcast.

The former President made a surprise visit with New York City police and firemen in the early hours today to commemorate the 20th anniversary of the September 11th terrorist attacks.

However, he was spotted just hours later on the live boxing telecast which has been taking place at the Hard Rock Hotel and Casino in Hollywood, Florida.

Trump flew down the west coast of the country and was front and centre when the first fight of the night began.

It was revealed this week Trump was reportedly earning an “obscene” amount of money to feature on the broadcast and he stole the show early with a staggering September 11 blast of US President Joe Biden.

Trump asked for a moment to speak at the start of the telecast and he didn’t hold back.

“As a country this is certainly one of the most important days. We had a very bad week because of some very bad decisions that were made,” he said.

“But we’re a great country and we’re going to make a comeback like nobody has ever seen before.”

“I love great fighters and great fights,” Trump said in a press release. “I look forward to seeing both this Saturday night and sharing my thoughts ringside. You won’t want to miss this special event.”

The event was already a big enough circus even before the addition of Trump as a commentator.

Belfort, 44, is a former MMA star who fought in the UFC and was supposed to step in the ring against Oscar De La Hoya but the ex-boxer tested positive for Covid-19 and was ruled out. In his place stepped 58-year-old Holyfield — who famously had his ear bitten by Mike Tyson during his heyday.

Trump called into a pre-fight press conference yesterday and when asked who he would most like to face in a boxing match, named the man who toppled him at last year’s US presidential election.

“If you said if I had to box somebody, I think probably my easiest fight would be Joe Biden,” Trump said. “Because I think he’d go down very, very quickly.”

There are plenty of people who don’t think Holyfield should be lacing up the gloves again, given his age. MMA reporter Ariel Helwani responded to vision of Holyfield sparring at a media event to promote the upcoming bout by tweeting: “This makes me uncomfortable.”

Holyfield hasn’t fought since 2011, but he had signed to fight Kevin McBride earlier this year — with a possible future fight against his old nemesis Tyson on the horizon.

After the proposed McBride fight failed to materialise, Holyfield posted on Instagram in August that he’d been “training hard for months”.

His fight against Belfort, which is being held on the 20th anniversary of the September 11 attacks, was originally scheduled to take place in Los Angeles. However, it was moved to Florida after California boxing authorities refused to sanction the bout because of fears over the welfare of Holyfield — who will be a month shy of his 59th birthday on fight night.