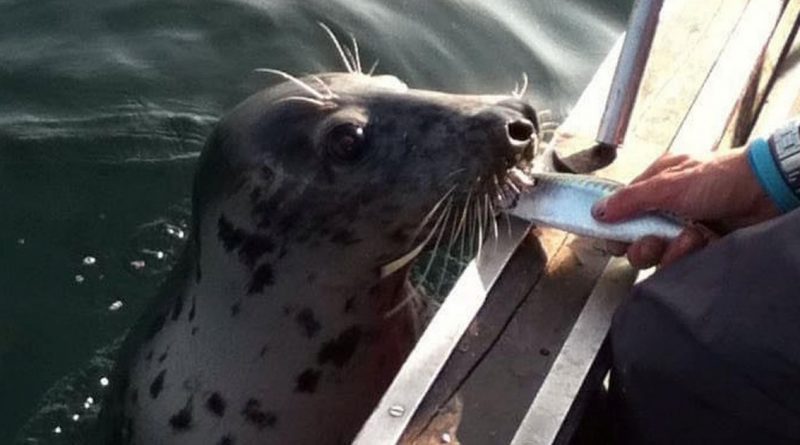 This is the heartwarming moment a blind seal greets its fisherman friend by his boat every day for more than a decade.

Nicholas Lewis, 41, first met Shauna the seal when she was just a pup in 2010 when she poked her head out of the water looking for some food.

The crab and lobster fisherman says he now feels like Shauna is like his own child as he sees her every day and “loves her very much”.

For the last 10 years, the sociable seal has greeted Nicholas at the steps at Peel Bay, in the Isle of Man, to “say hello”.

A touching video shows Shauna emerging from the water and waiting for Nicholas.

She gently swings her flippers to get closer to the boat so that Nicholas could give her a pat on the head.

In a separate clip, Nicholas is seen feeding Shauna his fresh catch of the day.

He said the seal would spend her afternoons following one of his three boats around the bay before enjoying two or three mackerel a day.

He added: "I don’t think we’d go a single morning without her coming to say hello.

“She used to come up the steps to wait for us knowing that we’d be there in the morning.

“Ever since then she’s always come up to see us. I love seeing her by my boat – she’s fascinating.

“She’ll wait for me to then follow me around.”

The dad-of-four added: “I have seen her every day for 10 years. She’s like one of my kids at this stage – I love her very much.”

Sadly Nicholas noticed Shauna’s left eye was suddenly turning white in late 2019, and then six months later they turned fully white and she began to “bump into everything”.

He said he has had to take extra care for his best pal in recent times, as she has become more prone to injuries due to her deteriorating condition.

He added that he now feels “more responsible than ever” for the adorable seal.

Nicholas, who has been fishing in the Isle of Man for 25 years, said: “She started to go blind in one eye last year and over the course of the year she’s slowly lost all of her sight.

“I do worry now that she’s blind that she’ll struggle. Seeing her like this is a bit heartbreaking.”

Despite this, the pair continue to be inseparable – something Nicholas says he doesn’t take for granted.

He said: “I look forward to seeing her every morning – it’s like a routine.

“But it’s something I will never take for granted."