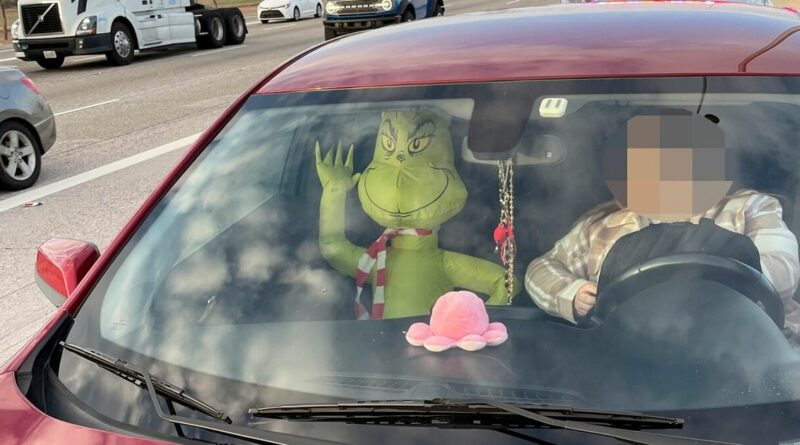 A man was arrested after he was spotted driving down the road with an inflatable Grinch in the passenger seat of his car.

The man was apprehended while driving on an interstate highway near Phoenix in Arizona, US, when Arizona Department of Public Safety (AZDPS) officers spotted a "suspicious" passenger in his car.

The man was driving in the high-occupancy vehicle (HOV) lane, which requires drivers to have at least two people in the vehicle – but sadly it was found the inflatable toy didn't quite make the cut and with no other passengers in the car, the driver was found to have broken the rules.

AZDPS joked about the case: "Last week, Trooper Ferguson spotted a driver in the high-occupancy vehicle (HOV) lane with a Seusspicious-looking 'passenger' on I-10 at Avondale Boulevard around 8am.

"The trooper stopped the driver and determined the grumpy green guy was, in fact, an inflatable Grinch […] and there were no other passengers in the car.

"While we appreciate the festive flair, this is illegal and the driver received a citation for their HOV violation.

"There is increased traffic on Arizona roadways this time of the year with many visitors coming to enjoy our nice(ish) weather. Before using the HOV lane, make sure you understand the law and restricted times.

"Don’t get caught with a Grinch!"

This isn't the first time a Grinch has caused Christmas drama.

The Daily Star previously reported an unfortunate mum had paid £85 for a visit from a Grinch – who then wreaked havoc on her house.

Mum Laura Magill, from Belfast, Northern Ireland, had the infamously grouchy Dr Suess character come to her house to perform for her children last year.

But the rogue entertainer allegedly destroyed the contents of a buffet and damaged several of Laura's possessions instead.

Describing the damage, she wrote: "Every bit of party food (and) expensive cupcakes threw all over the place, tree decorations broke.

"Fairy (washing) up liquid poured on my kitchen floor, eggs smashed and a full bottle of juice poured over my floor and son."

In response to the original post, Santa Stop Here Belfast, the company who had sent the performer, shared a snap of the Grinch and added: "We hope you see the funny side."