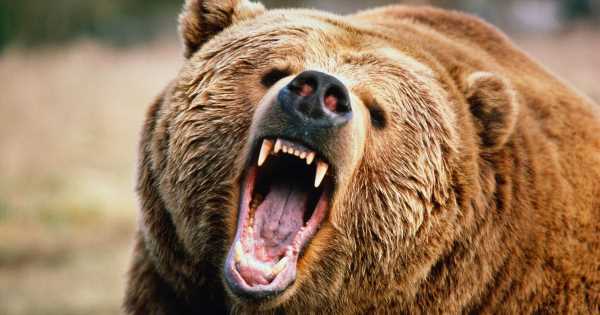 A homeowner woken up at 2am by a massive bear that had broken into his home emptied his pistol on the animal in a desperate bid to save his family.

Ken Mauldin and his family, who live in Colorado, in the United States, were startled to find the 400lb bear in their home in the early hours of Saturday.

Officials in the town of Steamboat Springs think the bear managed to push down the lever of an unlocked front door to get inside.

“When I got out of bed, [my wife] Kelly started screaming, ‘There’s a bear in the house’,” Ken told KUSA-TV.

“So, I grabbed a .40 calibre semi-automatic handgun.”

Kelly had been woken up when their dogs began barking, reports the New York Post.

She was standing at the bedroom door with the huge bear about 10ft feet away from her, in the dining room.

Ken stepped forward and fired a single shot and appeared to hit the bear, but it then charged him so he unloaded his pistol.

“I shot it as soon as I could shoot it. I shot it and then it charged me, and I kept shooting at it,” Ken said.

“It backed up and changed directions, busting through our banister railing and landing on the stairs, and then it slid down and wound up in a pile at the bottom of the stairs.”

For the latest breaking news and stories from around the globe from the Daily Star, sign up for our newsletter by clicking here.

The bear was still breathing but couldn’t get up, and at that point Ken called the police. It was pronounced dead by police and wildlife officers.

Justin Pollock, who has been a Colorado Parks and Wildlife officer for more than two decades, said: “I deal with bears a lot and I’d say this was a big bear.”

Ken said he hoped his terrifying experience would remind people of the threat posed by bears in the area.

“My only thought was protecting my family and putting that bear down,” he added.