BMW boss says they will CLOSE their plants in Britain putting 8,000 jobs at risk if Brexit causes supply chain delays at the border

A BMW boss has warned the company will close its British plants, putting 8,000 jobs at risk, if Brexit causes delays to its supply chain at the border.

The stark warning by Stephan Freismuth, the car giant’s customs chief, comes days after Airbus said it could leave the UK if Britain crashes out of the EU without a deal – costing thousands of jobs.

And it will ratchet up pressure on Theresa May to get her warring Cabinet and Brussels to agree on a plan for Brexit.

Around 8,000 people are employed by BMW in the UK, including the Mini plant outside Oxford and the Rolls-Royce factory at Goodwood. 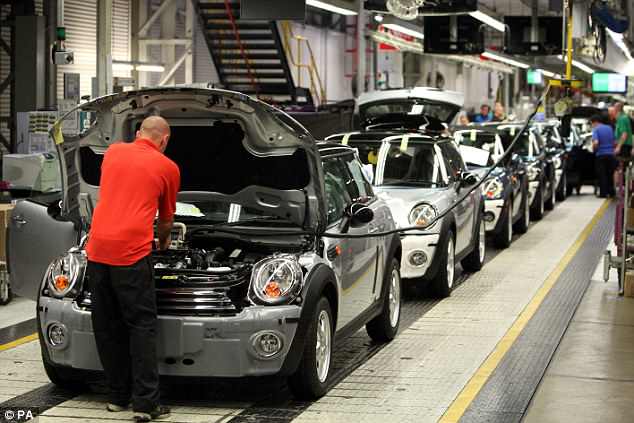 The stark warning by Stephan Freismuth, the car giant’s customs chief, comes days after Airbus said it could leave the UK if Britain crashes out of the EU without a deal (pictured, the BMW Mini plant in Oxford)

Britain’s booming car plants are a rare success story in the country’s manufacturing industry, and the closure would deal a major blow to ministers and workers.

Stephan Freismuth told the Financial Times:  ‘We always said we can do our best and prepare everything, but if, at the end of the day the supply chain will have a stop at the border, then we cannot produce our products in the UK.’

What are the firms who have warned they could move jobs out of the UK because of Brexit?

Here are some of the major firms raising their voices over Brexit:

Airbus – The plane manufacturer warned it could pull out of the UK with the loss of thousands of jobs if Britain leaves the single market and customs union in March 2019 without a transition agreement in place.

Unilever – Is moving corporate headquarters to Rotterdam in a major blow to the UK, although it has claimed the decision is not Brexit-related.

Siemens – The German firm’s boss has warned time is running out to secure a Brexit deal.

Goldman Sachs – Is set to at least double its Frankfurt office to 400 staff through a mix of relocations and local hires, though other EU sites will also be expanded.

HSBC – Plans to move up to 1,000 jobs to France, where it already has a full service universal bank after buying up Credit Commercial de France in 2002.

JP Morgan – Around 1,000 front and back-office roles are likely to be relocated from London as part of plans to bulk up a number of EU offices.

Bank of America Merrill Lynch – Intends to relocate up to 125 UK staff to Dublin as part of its Brexit contingency plans.

Morgan Stanley – Understood to have plans to add around 200 staff in Frankfurt through a mix of new hires and relocations, with around 80 staff to be added to the bank’s Paris office.

Jaguar Land Rover – The car giant is set to shift all production of its Discovery model to Slovakia from Birmingham in a move likely to affect hundreds of workers, although it has insisted it is not linked to Brexit.

EasyJet – The airline has applied for a new air operator’s certificate (AOC) in Austria to allow it to continue flying in the European Union after Brexit, setting up a headquarters in Vienna.

He said that BMW has invested significant amounts in the UK and wants to see the plants stay open.

But he warned that any disruption to the flow of supplies over the UK border would damage the company’s ‘just in time’ manufacturing model and hike costs.

Currently the UK is in the EU single market and customs union – this means that goods can be traded and transported freely over the border within the bloc without checks and delays.

Mrs May has said Britain is leaving both of these – a move which will allow the UK to strike new free trade deals and bring in immigration controls.

She wants to negotiate a new free trade deal with the bloc to allow trade to be as free and frictionless as possible to allow firms like BMW to stick to their business models.

But she is under severe pressure from all sides to spell out the details of what she wants this future relationship to look like.

The Government’s Brexit plans have been hit with delays as she struggles to get her warring Cabinet – which is split between Remainers and Leavers – to sign up to a single plan.

She has delayed the publication on a crucial white paper on her customs plans until after the key EU summit on Thursday this week – meaning no real progress is expected to be made at the meeting.

The PM will gather her Cabinet for a crunch meeting at her country retreat Chequers next week where ministers will thrash out a deal among themselves on Brexit.

Mrs May is facing the heat after a string of warnings from businesses that they will pull jobs from the country unless they get clarity urgently.

Critics have accused the businesses of repeating their ‘project fear’ tactics of the EU referendum – when doom-laden warnings that jobs will be lost because of Brexit failed to inspire voters.

But the PM had wanted to thrash out a final deal with the EU by a key summit in October – leaving her just four months left to get all parties on board.

It now looks like that date will slip, but the EU’s chief negotiator Michel Barnier has made it clear that the final deadline for a deal must be the end of the year.

The dire warnings from businesses come just a week after the PM managed to steer the Brexit Bill through Parliament after she narrowly avoided a humiliating backbench revolt on her plans.

Health Secretary Jeremy Hunt sparked anger among business leaders at the weekend when he told companies their dire warnings risks ‘undermining’ the PM’s hands in negotiations. 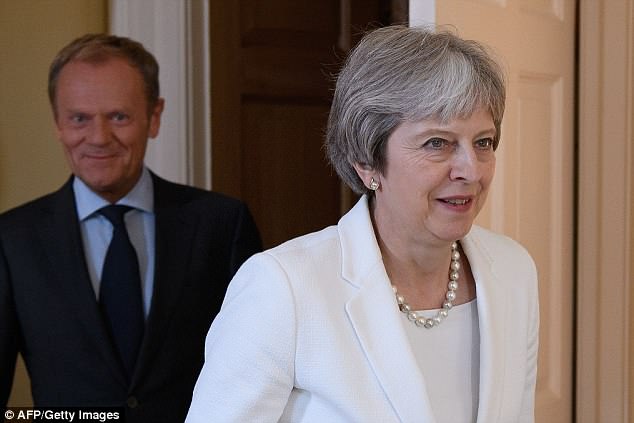