Bodies of Covid-19 victims lie in the streets of Ecuadorian city as virus death toll across Latin America passes 15,000 with the peak ‘yet to come’

Bodies of coronavirus victims have been seen lying in streets of the Ecuadorian capital ahead of what experts say will be Latin America’s peak in the coming days.

Forensics experts were seen attending to the corpse of a 65-year-old man suspected of contracting COVID-19 in Quito on Tuesday. Funeral home workers later arrived to load him into a coffin and drive him away.

Ecuador has more than 31,000 confirmed cases of coronavirus, including 1,569 deaths. The toll across Latin America and the Caribbean passed 15,000 on Wednesday, with more than 280,000 cases reported. 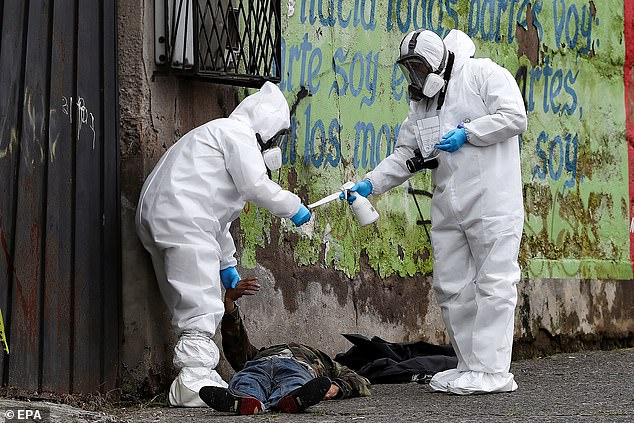 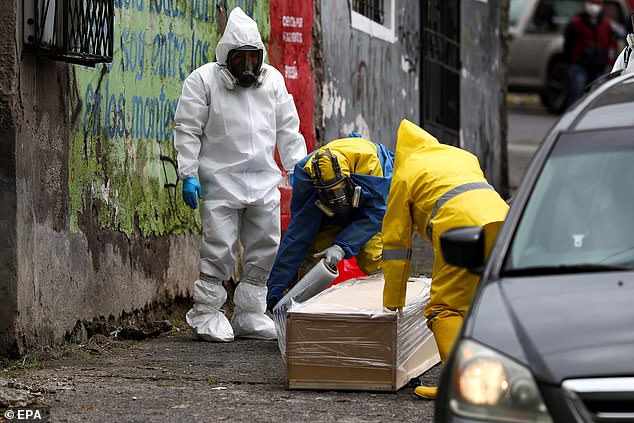 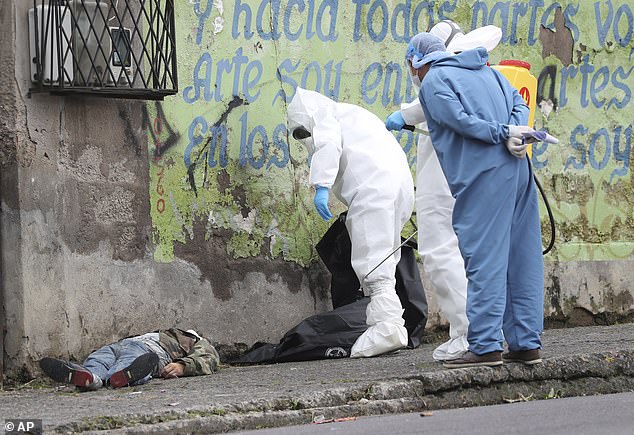 Forensic investigators look at the body of a man infected with the new coronavirus who collapsed on the street and died, according to Police Captain Diego Lopez

Experts believe that the pandemic will peak in Latin America in the coming days.

Several countries, including Ecuador, Colombia and the Dominican Republic, have extended their lockdown measures in an attempt to halt the spread of the virus.

The Pan American Health Organization (PAHO) has asked governments to be ‘cautious’ when they begin to loosen restrictions, warning that virus transmission remains ‘very high’ in Brazil, Ecuador, Peru, Chile and Mexico.

Brazil was the first country in the region to report a case of the novel coronavirus on February 26.

The patient was a 61 year-old man who had been travelling in Lombardy, one of Italian regions most affected by the pandemic.

The International Monetary Fund said they expect a 5.2 percent GDP contraction across the region due to the coronavirus crisis.

Alejandro Werner, head of the IMF’s Western Hemisphere section, said the region faces the spectre of another ‘lost decade’ between 2015-25, comparable to the no-growth era of the 1980s. 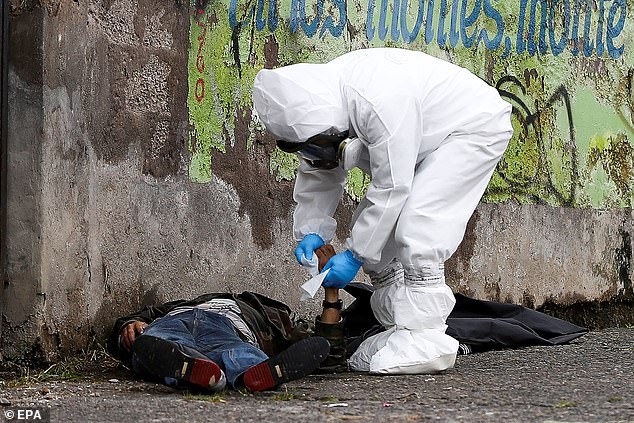 Several countries, including Ecuador, Colombia and the Dominican Republic, have extended their lockdown measures in an attempt to halt the spread of the virus 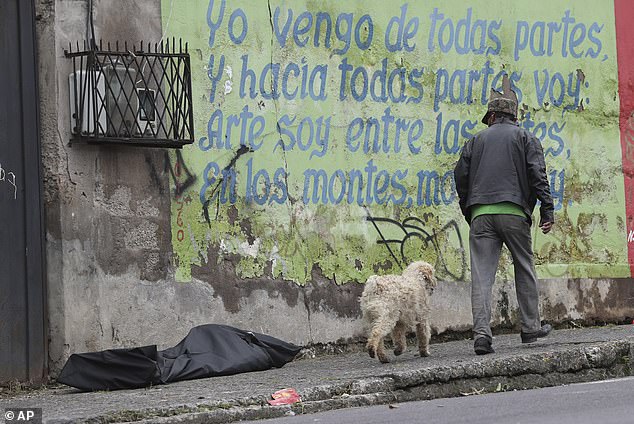 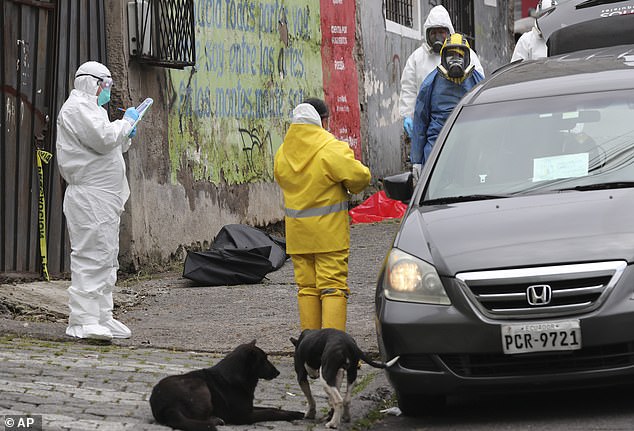 Funeral home workers arrive to remove the body of a man infected with the new coronavirus who collapsed on the street and died, according to Police Captain Diego Lopez, in Quito, Ecuador

While Latin America braces for the devastation seen elsewhere in the world, indigenous people’s are deeply fearful.

One of Ecuador’s indigenous communities believes it could be wiped out and dozens of its members have fled into the Amazon rainforest for shelter.

The Siekopai nation along the border between Ecuador and Peru, with some 744 members, has 15 confirmed cases of the virus and two elderly leaders died in the last two weeks after showing symptoms of COVID-19, the group said.

A large number of Siekopai have presented symptoms related to the outbreak but, after they sought help from a government health centre in nearby Tarapoa city, doctors told them they just had a ‘nasty flu,’ community President Justino Piaguaje said.

When the first of the elderly died in mid-April, Siekopai leaders urged Ecuador’s government to fence off the community and test the inhabitants but have received no response, he said. 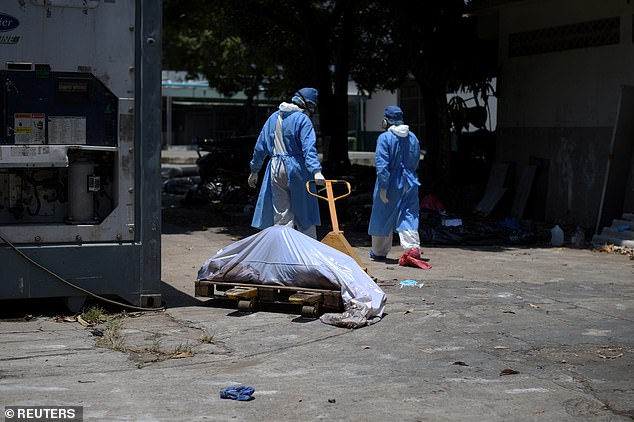 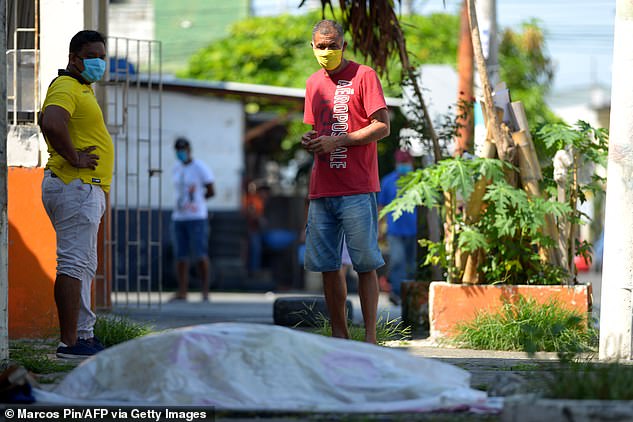 People look at a body said to be laying oustide a clinic for three days in Guayaquil, Ecuador on April 3

‘There are barely 700 of us. In the past we were victims of this type of disease and today we don’t want history to be repeated,’ Piaguaje said in a meeting held via social media on Monday.

‘We don’t want our people saying that there were 700 of us and now there are 100. What a scandal it would be for the Ecuadorian government to leave us with such a sad story in the 21st century,’ he added.

Fearful of the coronavirus, dozens of children and elderly Siekopai fled in canoes to Lagartococha, one of Ecuador’s largest wetlands in the heart of the jungle, to avoid infection. 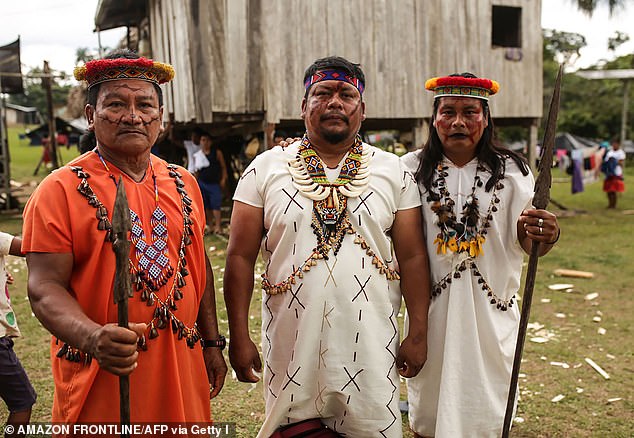 President of the Siekopai nation, Justino Piaguaje (centre), along with unidentified leaders, in Lagartococha, a community along the Aguarico River in Ecuador 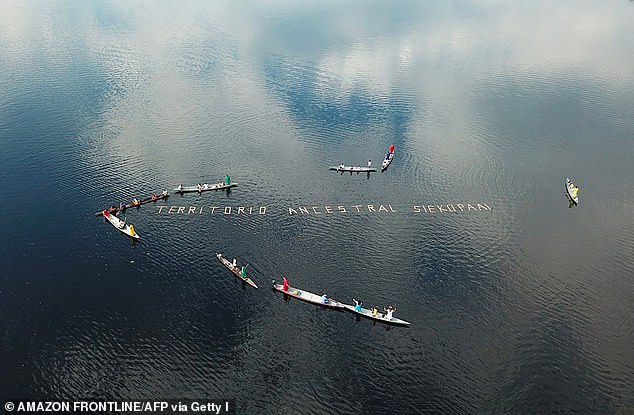 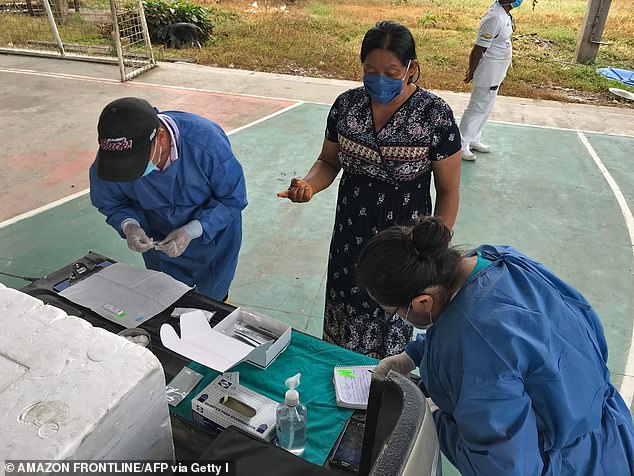 Ecuador’s Health Ministry personnel testing a Siekopai indigenous nation woman for COVID-19 during the novel coronavirus pandemic, in the community of San Pablo

Siekopai who stayed behind in their territory in Ecuador’s Sucumbios province are turning to homeopathic medicines to cope with respiratory problems, said Piaguaje.

Other indigenous groups in Ecuador’s Amazon also have confirmed coronavirus cases, according to indigenous organization CONFENIAE. Ecuador has reported more than 30,000 cases.

In neighbouring Peru, indigenous groups submitted a formal complaint to the United Nations in late April, saying the government had left them to fend for themselves against the coronavirus, risking ‘ethnocide by inaction.’

Human rights organisations working in Ecuador’s Amazonian regions say the health ministry is neglecting communities like the Siekopai, who have yet to receive tests or medical supplies despite their vulnerability.

‘They are in serious risk of being physically and culturally wiped out by the spread of COVID-19 in their territory,’ said Maria Espinosa, a human rights defender with the group Amazon Frontlines.