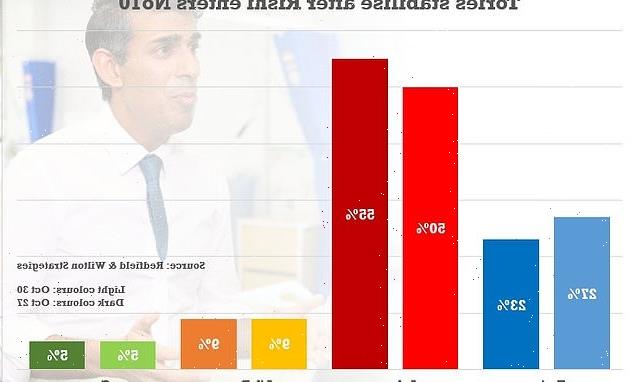 Rishi Sunak has been handed an early boost during his first week in No10 after Britons were shown to favour him over Labour’s Sir Keir Starmer as Prime Minister.

A new poll by Redfield & Wilton Strategies found two-fifths of voters (41 per cent) thought Mr Sunak is a better PM for the UK at this moment.

This compared to one-third (37 per cent) who backed Sir Keir as the best premier when asked to choose between the pair.

Mr Sunak has moved ahead of Sir Keir in a head-to-head comparison among voters since succeeding Liz Truss as PM last Tuesday.

He also received a further boost as the survey revealed Labour’s lead over the Tories had fallen by nine points since last week.

But half of voters (50 per cent) still said they would support Labour at a general election.

This is compared to little more than a quarter (27 per cent) who said they would back the Conservatives.

Labour’s poll rating fell by five points since the last Redfield & Wilton Strategies survey, while Mr Sunak’s Tories were up by four points.

Yet, with Sir Keir’s party still riding high and the Conservatives languishing, Labour remain on course for a huge majority at a general election.

Under an Electoral Calculus prediction, Labour at 50 per cent and the Tories at 27 per cent would give Sir Keir a majority of more than 280 seats in the House of Commons. 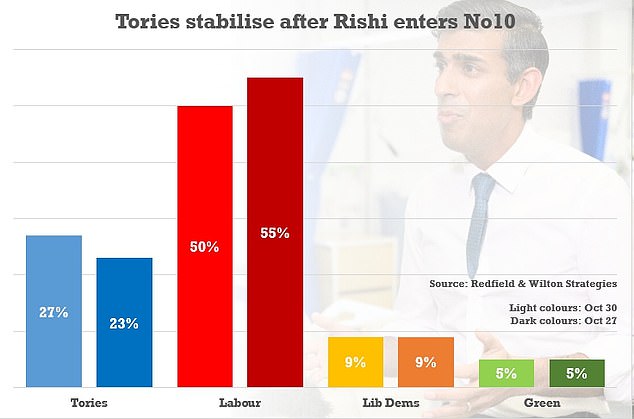 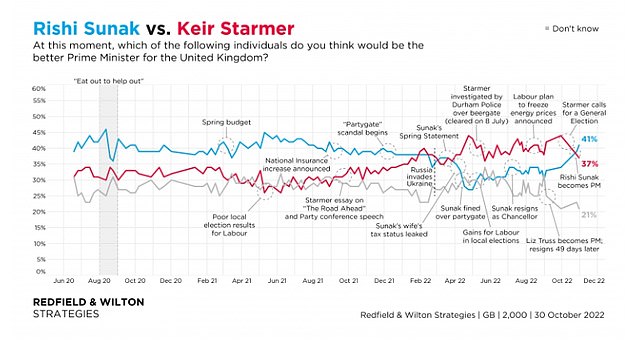 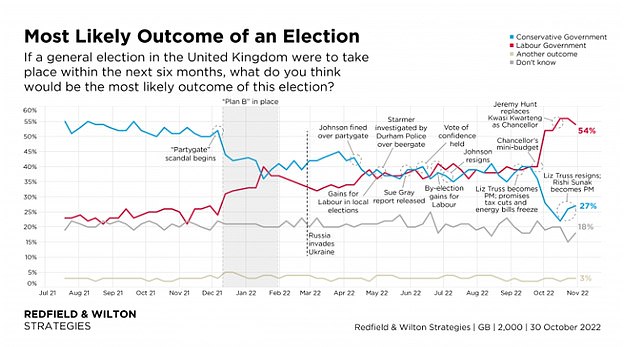 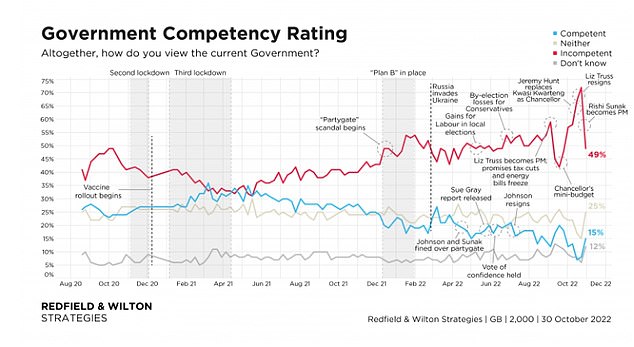 There were signs Mr Sunak has begun to claw back the Tories’ competency rating, which plummeted during Liz Truss’s disastrous spell in No10

The Redfield & Wilton Strategies poll showed the Tories are still struggling to retain the support of those who voted for them at the 2019 general election.

But there were signs Mr Sunak has begun to claw back the Tories’ competency rating, which plummeted during Ms Truss’s disastrous spell in No10.

The Government’s net competency rating stood at -34 per cent in the latest Redfield & Wilton Strategies poll, up 30 points from last Sunday.

Ahead of Mr Sunak and Chancellor Jeremy Hunt’s Autumn Statement on 17 November, nearly two-thirds (64 per cent) of voters cited the economy as one of the three most important issues that would determine how they would vote in a general election.

More than two-fifths (45 per cent) of respondents believed a Labour majority would be the most likely outcome if a general election were held in the next six months.

Less than one-fifth (16 per cent) expected a Conservative majority.