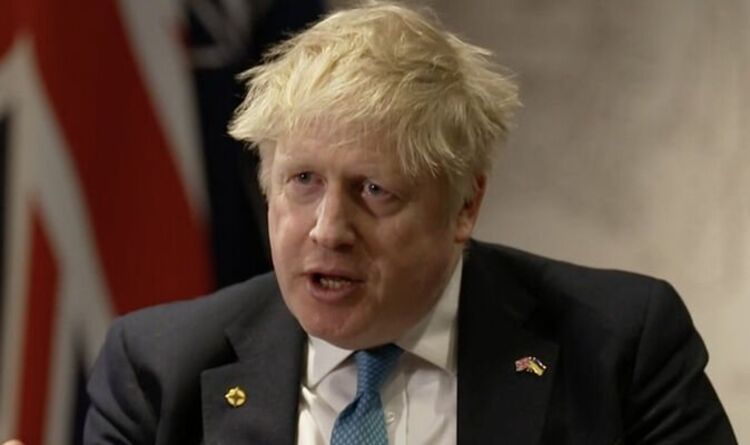 BBC Newsnight’s political editor Nicholas Watt questioned whether Boris Johnson was making himself a “marked man” for leading the Western effort against Vladimir Putin. Boris Johnson responded to the claims after Kremlin claimed yesterday that the British Prime Minister was the most active anti-Russian leader. Mr Johnson denied he was anti-Russian, insisting instead he was anti-Putin, as he accused the Russian President’s regime of “betraying his own people”.

He said the sooner President Putin’s regime ends “the better” for the ordinary Russian.

Speaking in his lengthy Newsnight interview, Mr Johnson said that the West had to bolster its support for Ukraine.

He explained: “We need to do more as the West, intensifying the sanctions, sending more missiles as we announced today, doing more to stop leakage of Russian gold.

“We need to carry out all the ways we can tighten the screw on Putin.”

Mr Watt followed this up: “Today Moscow, listening to this language, has said that you are leading the anti-Russia forces. Are you a marked man?”

On Thursday, Kremlin spokesman Dmitry Peskov said: “As for Mr Johnson, we see him as the most active participant in the race to be anti-Russian.

“It will lead to a foreign policy dead end.”

Mr Johnson hit back: “There is nobody around the G7 who feels anything but sympathy for the Russian people.

“They are being very badly led. I am a massive Russophile. I believe Russia is a great, great country.

“Sadly, the regime of Vladimir Putin is tragically betraying Russia’s real interest and is doing devastating damage to Russian reputation.

“The sooner that ends the better.”

Later in the interview, Mr Johnson told the BBC that he was not optimistic that Russian President Putin actually wants peace, despite ongoing talks between Ukraine and Russia.

“I think he’s decided to double down and try to Groznify the great cities of Ukraine in the way that he’s always tried to do and I think that’s a tragic mistake.”

He continued: “Think of Aleppo, think of Grozny.

“What they are expert at is standing away from these great urban centres and mercilessly shelling them and bombarding them with rockets.

“That’s what Putin is resorting to now.”

The latest intelligence assessment from the UK’s Ministry of Defence claims that Ukraine has been able to re-take towns and defensive positions east of the capital Kyiv.

The UK’s analysis adds that Russia’s supply lines are over-extended, as the war drags on into its fifth week.