Boris Johnson has been accused of a fresh U-turn after declining to meet campaigners representing families bereaved during the coronavirus pandemic.

The Prime Minister said ‘of course I will meet the bereaved’ when questioned last week in an interview about attempts by the Covid-19 Bereaved Families for Justice group to secure a meeting.

But the campaigners trying to secure a swift public inquiry into the Government’s handling of the crisis shared a letter from Mr Johnson in which he ‘regrettably’ declined to meet with the group.

‘It’s a U-turn followed by a U-turn,’ said campaign co-founder Jo Goodman, who lost her father Stuart to the virus.

‘The Prime Minister has done a 360: dodging five letters, then agreeing on live TV to meet with us, and now quietly telling us he’s too busy. It’s heartless.’ 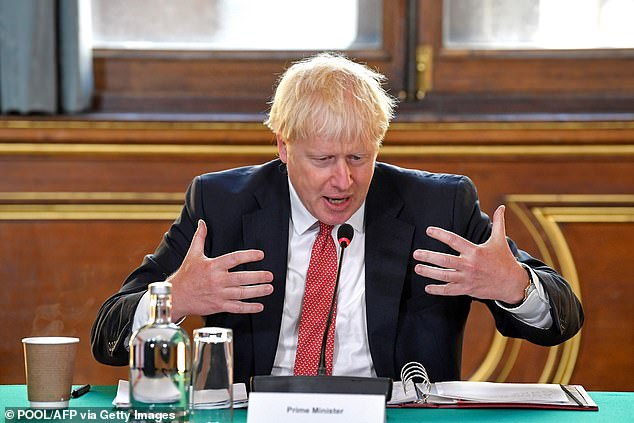 Liberal Democrat MP Layla Moran had earlier written to the Prime Minister saying she was ‘shocked’ to learn that he had ‘refused’ to meet the group – which says it represents 1,600 families.

On Wednesday, Mr Johnson told Sky News: ‘I am not aware of those letters but I will of course write back to every letter we get.

‘Of course I will meet the bereaved.’

But writing to Ms Goodman, the Prime Minister acknowledged ‘a letter will be of little comfort against the grief and heartbreak that families have suffered’ as he declined a meeting.

‘As much as I would wish to be able to offer my condolences in person to all those who have suffered loss, that is regrettably not possible and so I am unable to meet with you and members of Bereaved Families for Justice,’ he wrote.

Mr Johnson also said he understands the group have instructed solicitors who are in pre-action legal correspondence over an independent inquiry.

He said he will hold the inquiry ‘at the appropriate time’ and urged all further correspondence to be dealt with by their respective legal teams. 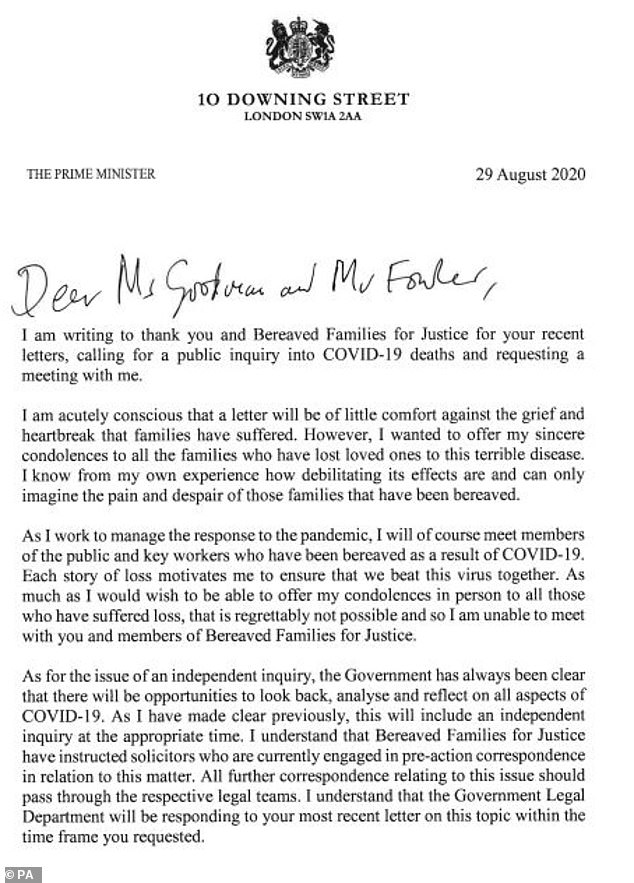 A Downing Street spokeswoman said: ‘The Prime Minister has responded to Bereaved Families For Justice to express his sincere condolences to all families who have sadly lost loved ones to this terrible disease.

‘He remains committed to meeting with members of the public and families of key workers who have been bereaved as a result of Covid-19.

‘The Prime Minister is resolute in his determination to beat this virus and prevent further families from suffering such dreadful loss.’

Shadow Cabinet Office minister Rachel Reeves said: ‘These revelations that bereaved families had to write to Boris Johnson five times asking to meet him – for him to privately go back on his public word and refuse are astounding, and upsetting for so many whose families and lives have been impacted by Covid in this way.

‘41,504 people have tragically lost their lives to this virus. The very least the Prime Minister could do is respond truthfully to their families, and have the heart to meet some of them and their representatives.

‘The Prime Minister has been going back on his word all summer – but to not even meet with grieving families hits a new low.’