London: Australia’s new formal pledge to cut emissions to net zero by 2050 is “heroic” and should be applauded, Boris Johnson has said, while also warning next week’s Glasgow climate talks are at risk of failure.

In remarks that will buoy Prime Minister Scott Morrison following a messy fortnight of horsetrading with junior Coalition partner the Nationals over the new policy, the British Prime Minister singled out political events in Canberra as a sign world leaders were beginning to take climate change seriously. 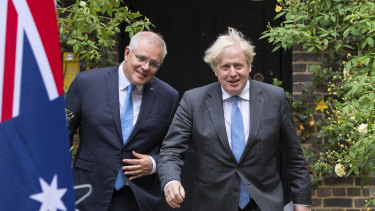 “I do think that world leaders are really starting to listen and see how urgent this is and what an emergency this is,” Johnson told an audience of school children at Downing Street.

“[The Coalition’s new net zero by 2050 policy] was actually very difficult for Australia to do … because Australia is very heavily dependent on coal and on lots of carbon-producing industries.

“They’ve done a heroic thing, the Australians, in getting to that commitment.

“I hope they will be joined by lots more countries in that region for the COP summit.”

Johnson, who will host November’s climate summit in Glasgow, made the comments as Morrison prepares to unveil the government’s plan to neutralise greenhouse gas emissions by the middle of the century.

Morrison is expected to release the plan during a press conference at Parliament House in Canberra on Tuesday, local time.

He will then fly to Rome on Thursday to attend the G20 summit before spending two days in Glasgow for the climate talks.

Johnson has used a series of phone calls with Morrison over recent months to urge Australia to join other countries in pursuing net zero emissions by 2050. Britain’s persistent overtures had at times caused friction in the relationship between Canberra and London.

Johnson did not raise Australia’s unwillingness to boost its 2030 target of a 26 to 28 per cent cut in emissions during Tuesday’s event. However, COP26 President Alok Sharma told The Sydney Morning Herald and The Age earlier this month that Britain wanted Australia to pursue a 45 to 50 per cent cut.

The United Kingdom’s High Commissioner to Australia, Vicki Treadell, also said no movement on the 2030 target “would not be acceptable”.

Johnson told the group of students that “peer pressure” would push countries to take tougher action but warned the summit might fall short in limiting global temperature rises to 1.5 degrees.

“It’s very, very far from clear that we will get the progress that we need,” he said.

“I am very worried because it might go wrong and we might not get the agreements that we need.

“It is touch and go. It is very, very difficult, but I think it can be done.”

When one student raised her concerns about the impact of bushfires on Australian fauna and flora, Johnson linked the blazes to global warming.

“These fires that we’re seeing, and floods and so on, these are very often driven by the change in climate and extreme weather patterns we’re seeing as a result.”

The Conservative Party leader used phone calls with Russian President Vladimir Putin and Indonesian President Joko Widodo to urge both countries to bring forward their net zero target from 2060 to 2050.