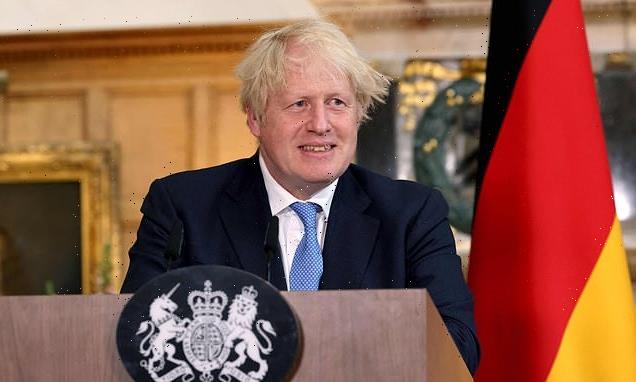 Boris Johnson today attempted to make light of the so-called ‘sausage war’ row between the UK and the EU as he joked to Angela Merkel that the ‘wurst is behind us’.

Mr Johnson and Mrs Merkel discussed the UK’s post-Brexit relationship with the bloc this afternoon during talks at Chequers.

The German Chancellor said she and the Prime Minister talked about the implementation of the contentious Northern Ireland Protocol and she expressed optimism that ‘pragmatic solutions’ can be agreed to smooth border checks.

Britain and Brussels agreed a truce this week on one of the thorniest issues relating to the protocol: The export of chilled meat from Great Britain to Northern Ireland.

EU rules would effectively ban those exports but the two sides have agreed to extend a grace period to the end of September to allow shipments to continue and to provide more time to find a permanent solution.

Mr Johnson said that ‘with goodwill and with patience we can sort it out’. 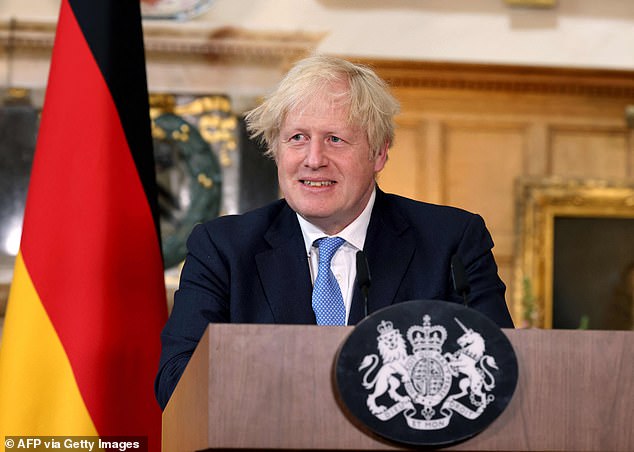 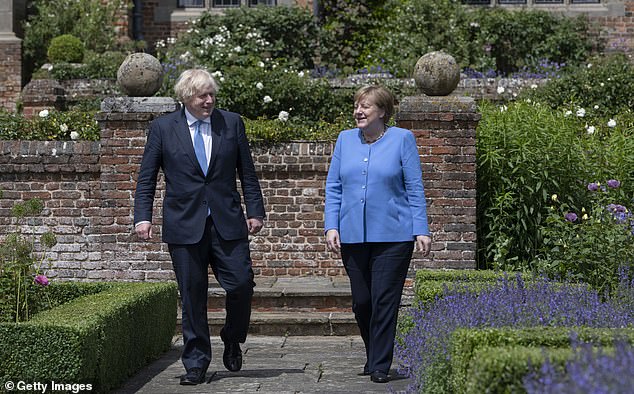 Speaking alongside Mrs Merkel at a press conference, Mr Johnson said: ‘Imagine if bratwurst could not be moved from Dortmund to Dusseldorf because of the jurisdiction of an international court – you’d think it was absolutely extraordinary.

‘So we have to sort it out. I’m sure, as Angela says, with goodwill and with patience we can sort it out.

‘Hopefully, as we said at our bilateral, when it comes to chilled meats the wurst is behind us, as I think Angela said, or maybe I said that.’

The potential prohibition on chilled meats from Great Britain is one result of the Northern Ireland Protocol, which has created a series of economic barriers in the Irish Sea.

The protocol is aimed at avoiding a hard border with Ireland by effectively keeping Northern Ireland in the EU’s single market for goods.

Shipments of chilled meats from third countries into the single market are generally banned – a prohibition which will eventually cover the rest of the UK unless a lasting solution is found.

Mrs Merkel said: ‘Of course we talked about the implementation of the Northern Ireland Protocol.

‘I personally believe that on the basis of this Protocol, and within the framework of how it was negotiated, we can find pragmatic solutions that on the one hand maintain the integrity of the single market, but that will also on the other hand contribute to creating acceptable solutions for the people.

‘And I think I’m optimistic that this can happen.’