Boris Johnson goes to war on the ‘crazy’ Brexit trade plan: In a major intervention the Foreign Secretary warns the customs partnership would leave Britain tied to EU

In a major intervention, he branded the proposed customs partnership ‘crazy’ and claimed it would create ‘a whole new web of bureaucracy’.

The Foreign Secretary added it would not meet the key test of Britain ‘taking back control’, and would restrict our ability to strike trade deals.

The plan, which is backed by Theresa May, was narrowly rejected by her Brexit ‘war cabinet’ last week.

Brexiteers now fear No 10 will try to ‘rebadge’ the plan and push it through by picking off two Remain-voting ministers – Sajid Javid and Gavin Williamson – who opposed it last week.

Under the partnership, officials would track shipments into the UK and collect tariffs for Brussels on goods ending up in the EU.

‘It’s totally untried and would make it very, very difficult to do free trade deals,’ he added.

‘If you have the new customs partnership, you have a crazy system whereby you end up collecting the tariffs on behalf of the EU at the UK frontier.

‘If the EU decides to impose punitive tariffs on something the UK wants to bring in cheaply there’s nothing you can do.

Greg Clark, the pro-Remain Business Secretary, insisted on Sunday that the partnership idea was far from dead and warned thousands of car industry jobs could go if Britain did not stay in some form of customs union.

Within minutes of Mr Clark talking up the plan, the pro-EU CBI and the British Chambers of Commerce issued statements backing his position.

But Mr Johnson said: ‘Colleagues in Cabinet have different concerns about different aspects of the argument and it’s entirely right that they should make their points.

‘But we should be looking at the opportunities and thinking confidently about the UK and believing what we can do rather than succumbing to a sort of Project Fear mark 2,3,4,5,6.’

He made his comments in an interview with the Daily Mail during a two-day visit to Washington DC. 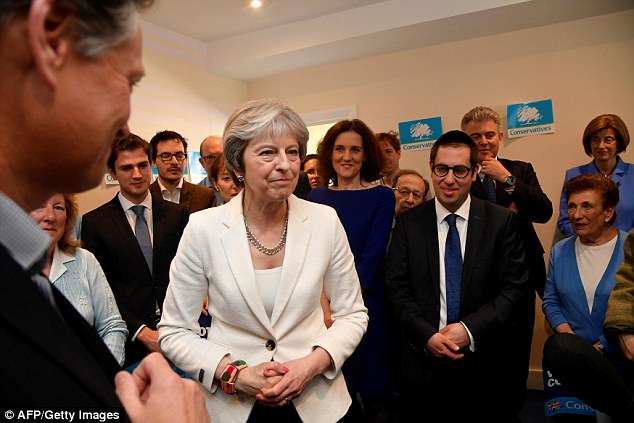 Theresa May, who had backed the customs partnership proposal which was narrowly rejected by her Brexit ‘war cabinet’ last week

He hailed the ‘massive opportunity’ of a US trade deal and said a ‘rich and deep’ agreement could be reached only after a clean break from the EU.

‘You can’t do that if you remain locked in the lunar pull of Brussels, the tractor beam of Brussels,’ he said.

‘There’s a discussion going on and we haven’t resolved this but some of the ideas would make it very difficult for us to do meaningful free trade deals.’

On Northern Ireland he said that if Britain chose to change its laws on imported goods or foods – as is often required under trade deals – that would inevitably mean checks at the border.

‘It only solves the Northern Ireland border question if you force companies to prove that an imported tariff reduced good has been consumed in the UK and if you insist on complete regulatory alignment with the EU rule book,’ he said.

‘Otherwise if Britain chose to vary its laws in any way at all on goods and agrifood, then logically you would need checks at the border.’ 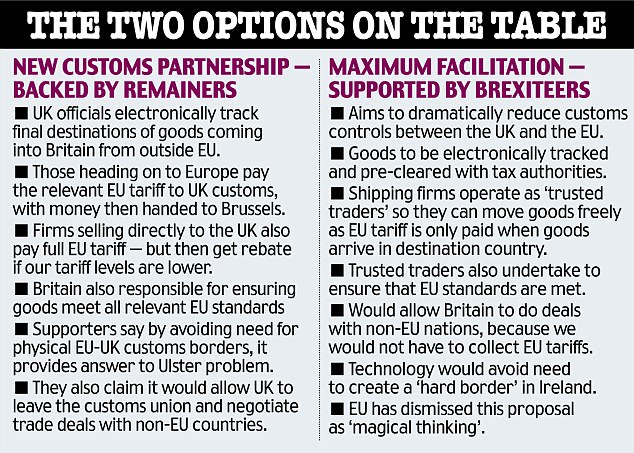 The Foreign Secretary warned against being locked into the EU’s structures: ‘That’s not what the Americans want to see, what they want to see, like all our friends, is a confident free-trading Britain able to do its own deals.’

A senior White House source said last night that Donald Trump was determined to do a ‘great’ trade deal with Britain.

The source also said the US President was looking forward to coming to the UK in July but signalled some nervousness about possible protests.

‘The President is keen for Britain to get out of the EU so we can get on with doing a great trade deal. He’s surprised it’s taking so long,’ the source said.

‘He is looking forward to coming over and he wants people to be positive about that.’

Mr Johnson said opponents of Mr Trump’s visit risked damaging the economy: ‘Overwhelmingly the people of the United Kingdom will want to hear from the President of the United States.

‘America is our number one export market. Trade with America is worth $100billion a year.

In January Mr Trump repeated his determination to secure a US–UK trade deal, saying: ‘As you know you are somewhat restricted because of Brexit, but when that restriction is up we’re going to be your great trading partner.’

Mr Johnson has made a series of pointed and carefully-timed interventions in the Brexit debate since entering government, often to the dismay of Number 10.

In September last year – in advance of a major speech by Theresa May in Florence – he wrote a 4,000-word ‘Brexit manifesto’ that prompted accusations of backseat driving.

One of the world’s leading investors is ready to pump billions of pounds into Britain.

Warren Buffett, who has criticised the UK’s decision to leave the EU, says he is ready to use his company’s £80billion war chest to snap up UK firms.

Mr Buffett, 87, told investors over the weekend that Britain was one of ‘a number of good countries we’d be quite happy to put our money into’.

Speaking at the annual meeting of Berkshire Hathaway, his investment firm, he said: ‘I hope tomorrow I get a call from Germany or Britain or Italy – you name it.’ 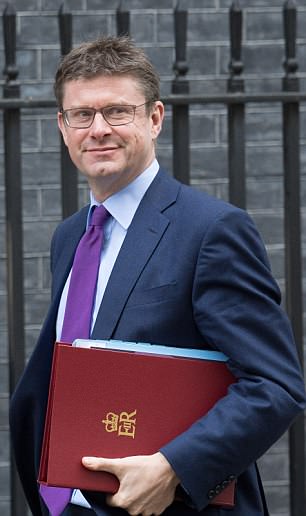 Business Secretary Greg Clark, who told the BBC that the customs partnership remained on the table

At the EU referendum almost two years ago, the British people heroically saw through Project Fear.

In their determination to embrace national independence, they refused to be intimidated by the deceitful scaremongering about our supposedly apocalyptic future after Brexit.

Yet the Establishment has never accepted the democratic verdict of the electorate.

Unable to imagine life without the EU’s rule, devoid of any real faith in Britain’s capabilities, key elements of the political class have embarked on a systematic campaign to obstruct and emasculate Brexit.

That relentless hostility shone through most recently in debates in the House of Lords, where unelected, unaccountable peers lined up to sneer at the public’s wish for national freedom.

Too much of this spirit of fearfulness and surrender has infused our side in the negotiations with the EU over withdrawal, leading to a catalogue of concessions in return for little.

In the same vein, the Civil Service, those past masters at delay, keep pushing for an ever longer transition period in the hope that institutional inertia may ultimately thwart Britain’s departure.

Now the Establishment is refusing to let go of its new weapon: the customs union.

Over the weekend, Business Secretary Greg Clark told the BBC that the Theresa May’s proposed new customs partnership – a fudged version of the customs union that was rejected by her Brexit cabinet only last week – remained on the table.

An arrangement of this kind is necessary, he declared, otherwise the British economy will suffer and trade will shrink.

Gazing into his crystal ball, Clark specifically warned that 3,500 car jobs at Toyota could be at risk without the customs deal.

Whether intentional or not, these comments echo the same old soundtrack of alarm that always accompanies calls for submission to Brussels.

But Project Fear did not work in 2016 and it will not work now.

That is partly because, as has been well-rehearsed in recent days, the new customs partnership would create a bureaucratic nightmare, hurt our economic prospects, hit our global trade and undermine our democracy.

The jewel in the crown of Brexit will be the ability to reach our own trade deals around the world, particularly with the fast developing nations of Asia – something that Brussels simply cannot stomach.

In their efforts to hype concerns about Brexit and be as obstructive as possible, EU officials, Dublin and the pro-EU brigade here talk endlessly about the difficulty of the Irish border.

In reality, the ‘Irish question’ has been cynically seized upon and ‘weaponised’ by fearmongering Remainers who hope to cajole us into staying put.

No one actually wants a hard border.

As John Thompson, the head of the HMRC, has made clear, with goodwill and imagination, the problem is easily resolvable, especially since Britain and Ireland have operated a common travel area since 1923.

Indeed, the whole question of a customs arrangement with the EU has been grossly exaggerated by the Remain lobby.

Most of our economy is based on the domestic market, which suffers from Brussels’ protectionist policies that push up prices and increase burdens on businesses.

Freed from the dead hand of Brussels, consumer costs – especially of food – will fall and enterprise will flourish.

It is absurd to cling to the idea, eagerly peddled by the anti-Brexiteers, that the EU is some kind of engine of economic growth.

Just the opposite is true. EU officialdom is the enemy of jobs and innovation, as is reflected in its cripplingly high rates of unemployment, especially among young people, in EU countries like Spain and Greece.

And EU-led stagnation is bound to worsen in the coming years, as Brussels presses ahead with its cherished ideological project of further political integration.

That will mean more taxation in the name of harmonisation, more regulation, more centralised governance, more streams of directives.

Britain will have to be part of that if we end up in a customs union.

Brexit gives us the chance to break free from the continuing destruction of our sovereignty. That is what the British public recognised in 2016.

Tragically, however, the Establishment, reflected in its doom-mongering asides, remains mired in timid defeatism, reluctant either to challenge the EU or contemplate change.