On an unannounced visit to Kyiv on the country’s Independence Day, celebrating 31 years since the collapse of the Soviet Union, he said: “If we’re paying in our energy bills for the evils of Vladimir Putin, the people of Ukraine are paying in their blood.!

“We know the coming winter will be tough and Putin will manipulate Russian energy supplies to try to torment households across Europe.

“Our first test as friends of Ukraine will be to face down and endure that pressure.”

He added: “What happens in Ukraine matters to us all. That is why I am in Kyiv today.

“That is why the UK will continue to stand with our Ukrainian friends. I believe Ukraine can and will win this war.”

Mr Johnson said Vladimir Putin had been “insane” to invade Ukraine – and he praised the country’s resistance.

He said “like one of those indomitable Ukrainian boxers” the country “came off the ropes and hit him with an uppercut that sent Putin’s armies reeling from Kyiv and a hook to drive him from Kharkiv”. 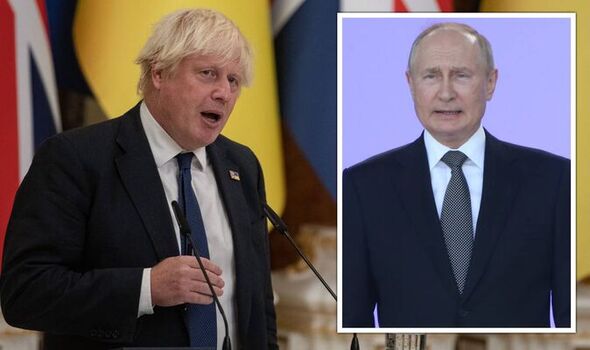 He added that “out of the ashes of your towns and cities, out of the monstrous scars that are being left by Putin’s missiles, something beautiful is blooming and it is a flower that the whole world can see and admire. And that is the incomparable will of the Ukrainians to resist”.

Mr Johnson made the surprise visit to the capital Kyiv before meeting President Volodymyr Zelensky to pledge the UK’s unwavering backing.

It was his third visit to Kyiv since the war began and almost certainly his last as Prime Minister. He was presented with the Order of Liberty, Ukraine’s highest award that can be given to a foreign national.

He and President Zelensky unveiled a ceremonial stamp before Mr Zelensky displayed a plaque for the UK Prime Minister on the “alley of bravery” outside the Ukrainian parliament.

The UK aid package will include unmanned surveillance and missile systems for the Armed Forces of Ukraine. 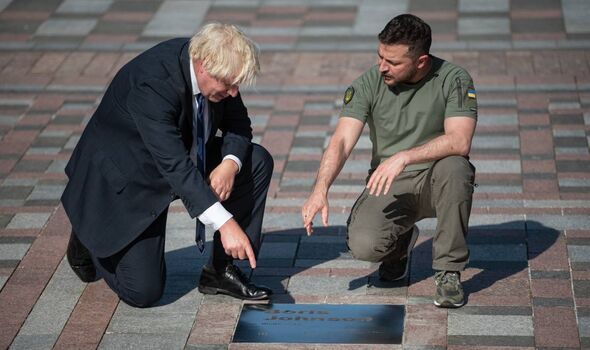 It will also gift some 2,000 state-of-the-art drones and loitering munitions to enable Ukraine to better track and target invading forces.

Meanwhile, US President Joe Biden announced a new £2.5billion aid package for Ukraine to coincide with the six month anniversary of the war.

The massive war chest – the single largest tranche given to Ukraine since Russia invaded back in February – will be made up of comprehensive military aid, including state-of-the-
art weaponry.

It will add to growing armoury from the West, which includes the deadly Himars rocket system, helicopters and armoured vehicles.

Announcing the package, Mr Biden said: “The United States of America is committed to supporting the people of Ukraine as they continue the fight to defend their sovereignty. 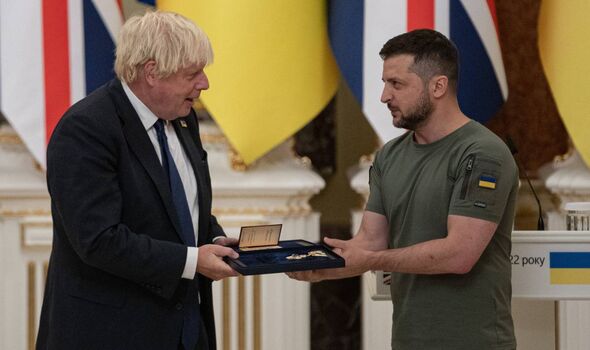 The sizeable assistance will ensure Ukraine can continue to defend itself over the long term, said Mr Biden.

The announcement came as the nation quietly celebrated its independence after President Zelensky warned that American intelligence suggested the Russian onslaught was expected to intensify, with attacks on civilian infrastructure and government facilities.

He said in a public address: “[Today] is an important day for all of us. And that is why this day, unfortunately, is also important for our enemy.”

All the usual parades and gatherings were cancelled – and the warning proved all too accurate. At least 15 people were killed in a Russian rocket attack on a rail station late yesterday. Fifty others were reported wounded.

President Zelensky announced during a speech to the UN Security Council that the missile hit a carriage at Chapline station in the Dnepropetrovsk region.

The president and his wife Olena yesterday visited the Memory Wall of Fallen Defenders of Ukraine, as part of Independence Day.

Other regions across the war-torn nation also restricted public gatherings, including Kharkiv where Mayor Ihor Terekhov announced an extension to an overnight curfew to run between 4pm and 7am until today.

In the port of Mykolaiv, near Russian-held territory to the south, regional governor Vitaliy Kim said authorities were ordering residents to work from home this week and urged people not to gather in large groups.

Near to the frontlines in the south of the country, Ukraine said Russia fired rockets into several towns north and west of Zaporizhzhia, Europe’s largest nuclear power plant, captured by Russian forces shortly after they invaded in February.

There have been calls for the area to be demilitarised.

She said: “Today is the day the Ukrainian people celebrate their independence, but they are having to fight for their country’s future and the unalienable right of all people to self determination and liberty.

“If I become Prime Minister, I will do everything I can to ensure the flame of freedom in Ukraine continues to burn bright.”

As the grim six month milestone passed, the Kremlin refused to give official casualty figures. Western officials estimated that between 70,000 and 80,000 Russian troops have been killed or badly wounded since Putin launched his invasion.

General Valeriy Zaluzhnyi, head of Ukraine’s armed forces, said yesterday nearly 9,000 Ukrainian military personnel have been killed. The office of the UN high commissioner for human rights said some 5,587 civilians have also been killed and a further 7,890 wounded between February 24 and August 21.

On the ground, military analysts say Putin’s “worst case scenario” is playing out as Russian forces continue to struggle, with the spectre of a brutal winter looming.

Morale among Kremlin forces is said to be at an all-time low and the UK Ministry of Defence said Russia is finding it increasingly difficult to motivate and add “auxiliary forces” to its regular troops in the Donbas region.

Commanders are using financial incentives to get troops into combat. The MoD said Russia classifies its war with Ukraine as a “special military operation”, which limits the state’s powers of legal coercion.

Thirty-one years ago Ukraine broke away from the iron grip of Soviet Moscow to establish its independence.

Now Ukraine is fighting for her life to remain free.

The break from Soviet rule was largely a peaceful event. Generations of Ukrainians, like myself, were able to live free, though without any real understanding or appreciation of the freedom and independence we enjoyed.

Coming from a family with a most active role in all stages of the independence process, even I regarded August 24 as just another fun holiday to have.

We were lucky to have enjoyed taking it for granted. Even if for a while. Eight years ago, in February 2014, Russia invaded Ukraine, annexing Crimea and occupying parts of Ukraine’s East. Eight years ago Russia started a war, which forced the Ukrainian nation to re-evaluate the concept of independence.

Eight years of war make up a quarter of the renewed Ukrainian independence. And through this our nation has learned the hard way the price of freedom.

The hardest lessons are the ones learned every day for the last six months. On February 24, Russia escalated its aggression to unprecedented levels. War crimes, air raids and all kinds of atrocities became the new reality.

Every Ukrainian today knows exactly what it feels like when someone is trying to exterminate you, destroy, kill and erase you from the face of the earth. Together with your language, culture, history and all other attributes that identify you as you.

Instead of celebrating the completion of these projects, this year we watch many of the dreams destroyed.

As we prepare to celebrate our nation in bomb shelters, as we evacuate our children and as we say goodbye to the fallen heroes, we in Ukraine are more determined than ever to keep living.

And so united we stand. We fight to survive, knowing well enough that if we stop we will be no more.