The Prime Minister will face MPs in the Commons this afternoon to explain his announcement last night of how Britain will ease itself very very slowly out of the most draconian aspects of the shutdown.

Downing Street initially planned for the daily press conference late this afternoon to be replaced with questions from the public, but the PM will now also face questions from journalists.

‘What I wanted to see was this detail (on lifting the lockdown) pinned down because this is a difficult exercise, I accept that, and any government would struggle,’ he said. 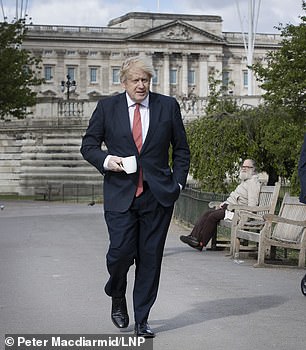 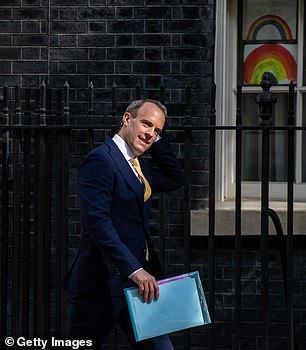 Boris Johnson goes for a walk in St James Park behind Downing Street clutching a mug of tea as holes appeared in his speech to the nation last night. He will address the Commons later today. Foreign Secretary Dominic Raab caused chaos and confusion in a series of disastrous interviews this morning

‘But you almost need more clarity coming to this stage than you did in the lockdown.

‘Then, it was pretty clear, pretty straightforward – you stay at home.

‘Coming out, you need real clarity and it is a bit all over the place.’

It comes as the plans laid out by Mr Johnson on television last night descended into near farce.

The first ministers of Scotland and Wales said they would not be adopting his ‘vague’ new slogan ‘Stay Alert, Control the Virus, Save Lives’  and would keep to the ‘Stay Home’ message already in place.

And adding to the confusion, Foreign Secretary Dominic Raab this morning contradicted  Mr Johnson’s call for millions of workers to return to duties immediately in the middle of rush hour.

The Foreign Secretary insisted the government is not urging workers to return until Wednesday, despite No10’s official press release on the PM’s TV address saying they should go back today.

The comment, when many will have already been on their way by road or public transport, came as it emerged that health and safety guidance for businesses will not be issued until tomorrow – 24 hours before the back to work edict now comes into force.

Mr Raab spread more confusion by suggesting that people can meet two relatives such as parents in parks while maintaining social distancing, sending Downing Street scrambling to say that is not in fact the case.

He also got in a muddle and suggested that pubs could open as early as June – when the PM said it would be no earlier than July.

Mr Starmer added: ‘What I think everybody wanted to hear was something that was pretty clear and a sense of all the countries – England, Scotland, Wales – pulling together and we didn’t get clarity,.

‘I accept that for some things, like when can a school open, that’s going to be conditional, but on this business of going back to work, the suggestion was last night that people go back to work today if they can’t work at home, but don’t use public transport – and that’s really difficult, particularly if you’re in a city like London – and without guidelines in place as to how work places need to operate.

‘You know, simple things like how do you keep people two metres apart? What about sanitation, protective equipment?

‘These are things that were discussed in a consultation document last weekend but not resolved yet.

‘I was actually quite surprised the Prime Minister said, effectively in 12 hours’ time, start going back to work without those bits in place.

‘We needed that clarity and it is unravelling a bit this morning because I think the Foreign Secretary has now said, ‘Well, go back to work doesn’t really mean until Wednesday’, so suddenly it has shifted.’