Bouncer who punched promising rugby player, 18, to the ground leaving him deaf in one ear in vicious nightclub brawl is jailed for 21 months

A bouncer who punched a promising rugby player to the ground and leaving him deaf in one ear during a vicious nightclub brawl has been jailed for 21 months.

Joe Sharratt, 18, was left with permanent hearing loss after being rendered unconscious during a fight outside Factory in Manchester in 2018.

Gareth Carr, 21, who punched Mr Sharratt with a ‘very strong blow’, has now been jailed for 21 months.

Five other bouncers, including the head doorman that night, were spared jail. 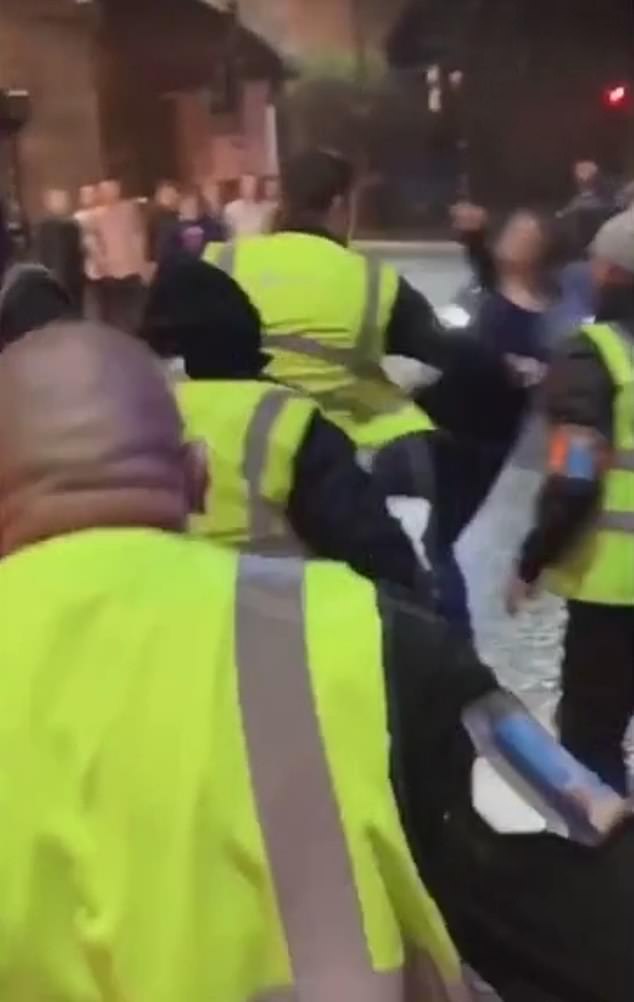 The incident, which was caught on camera, saw the group attack Mr Sharratt and his friend Leon Cooper after the pair were asked to leave the Factory nightclub in Manchester

The incident, which was caught on camera, saw the group attack Mr Sharratt and his friend Leon Cooper after the pair were asked to leave the club.

Judge Suzanne Goddard QC told the defendants: ‘It seems as if all the training the doormen must have received as registered under the SIA (Security Industry Authority) scheme had been forgotten, and excessive and unnecessary force was used.

‘It is incomprehensible that what was a minor incident at the start could not be peaceably and lawfully controlled by a group of, in the main, experienced and trained doormen.’

Manchester Crown Court heard friends Mr Sharratt and Mr Cooper, both 18 at the time, had been enjoying a night out together. 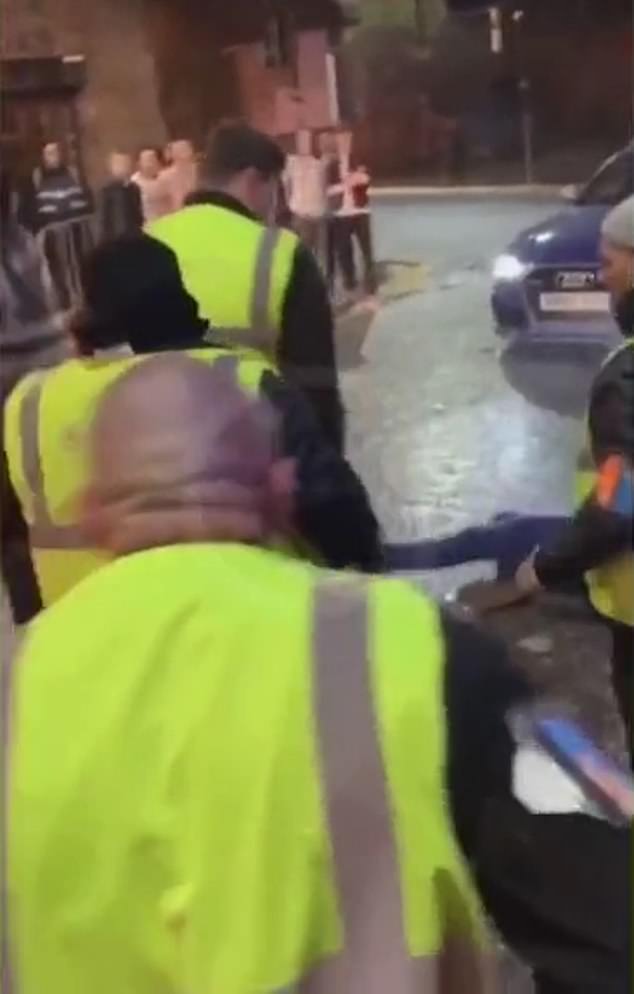 Mr Sharratt, a talented rugby league player, had played at the Etihad Stadium earlier that day, in December 2018, representing Lancashire in a game against Australia.

They arrived in the city centre just before 1am and went straight to the club.

Prosecuting, Hugh McKee said they were talking to some girls, but some other men began to take exception and there was an altercation.

Mr Sharratt and Mr Cooper were asked to leave the club and did so without any problems.

But when outside, Mr Cooper, a University of Manchester student, asked why they had been ejected.

The dispute began to get ‘more heated’, the court heard, and the two men were then pushed away by door staff. 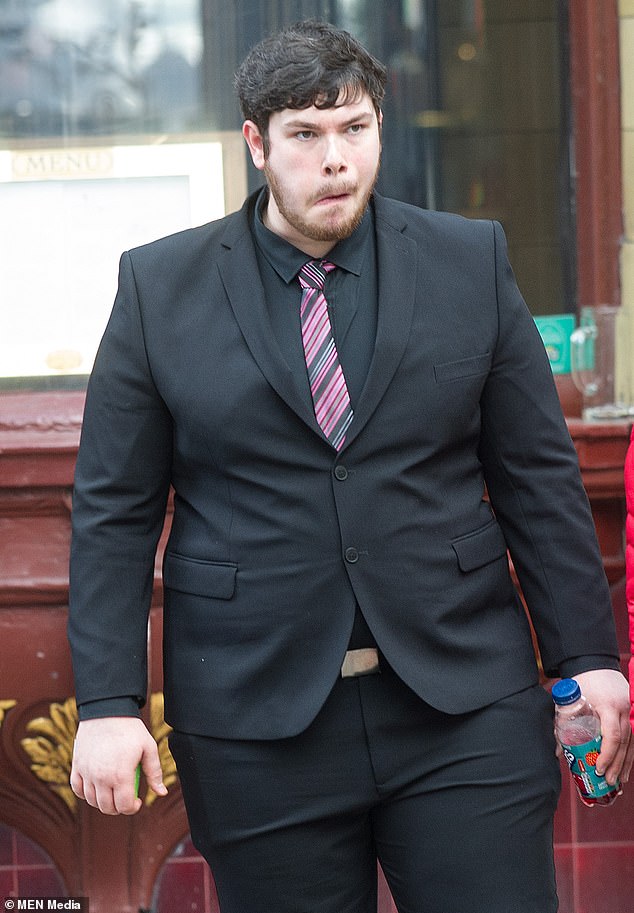 Gareth Carr, 21, has now been jailed for 21 months after pleading guilty to causing grievous bodily harm to Mr Sharratt as well as admitting affray

The court heard one of them may have ‘punched out’, but Judge Goddard said this could ‘in no way justify what then happened’.

It then descended into a brawl with punches being thrown by the doormen.

Mr Cooper was repeatedly punched to the head and body.

Blows also ‘rained down’ on Mr Sharratt who then fell to the ground, unconscious.

Imran Ilayas, 41, punched both men, and threw Mr Cooper against a metal barrier.

Javad Yousefi-Solimonbolagh, 25, was punched himself, but then proceed to join the attack on both men. 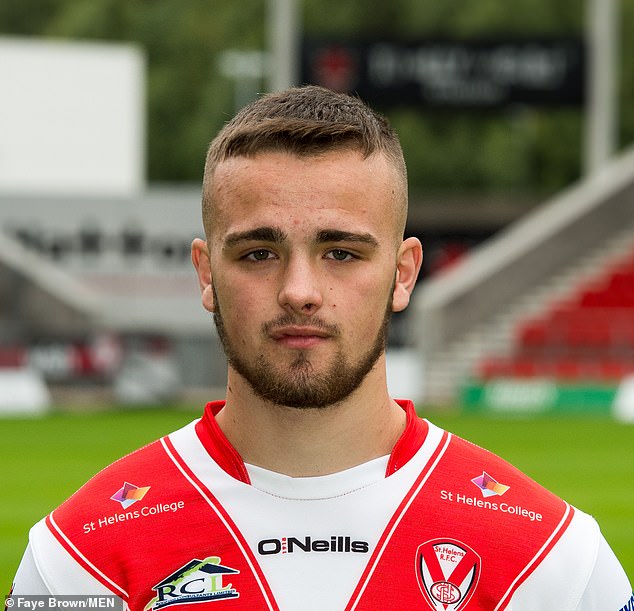 Mr Sharratt, a talented rugby league player, had played at the Etihad Stadium earlier that day, in December 2018, representing Lancashire in a game against Australia

Amjad Yasin, 38, a dad-of-six, punched Mr Sharratt in the head, and ‘tall and powerfully built’ Carr landed a ‘very strong blow’ on him, which caused him to fall to the ground.

Ilayas also dragged Mr Cooper to the ground and held him, while others, including Carr and 42-year-old Lee Clark, attacked him.

Doormen at venues nearby were ‘shocked’ at the ‘aggression’ shown by the Factory bouncers, the court heard.

One nearby door supervisor said they didn’t try to diffuse the situation or use restraint techniques.

Judge Goddard said: ‘These defendants’ behaviour that night was a shocking example of just how quickly a situation can get out of control if doormen at such venues ignore their training, and instead resort to a reaction of “if a customer punches me, I’ll punch him back”.’

Mr Sharratt suffered two bleeds to the brain and was fortunate not to suffer brain damage. 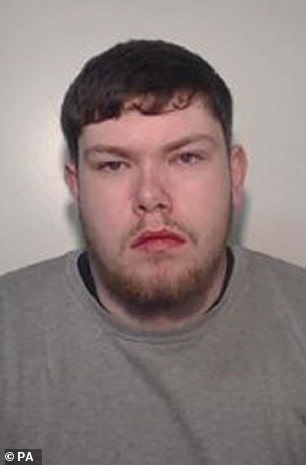 Judge Goddard told Carr: ‘You caused serious lasting injuries to a member of the public, in circumstances where it was your duty to prevent violence, not use it unlawfully’

But he did sustain permanent hearing loss and ‘debilitating’ tinnitus on his left ear. He is now profoundly deaf in that ear and there is minimal to nil chance of it returning, the court heard.

Mr Sharratt, who played rugby for St Helen’s Academy, was advised by doctors not to play the sport again, but he said he decided to return to the sport, which is his passion.

He said the tinnitus has also affected his ability to concentrate while studying. He had deferred his place at university to pursue his dream of becoming a professional rugby player.

In a statement, he said: ‘I would like to express what a massive impact this assault has had on my life. I just want to move on with my life and do everything I was doing before.’

After being arrested all the defendants, except Yasin, claimed their actions were in self-defence.

Alistair Reid, defending Carr, said that there appeared to be ‘deficiencies’ in the training the defendant received to work as a bouncer.

He said Carr did received ‘no practical guidance as to how to physically diffuse situations’, and that gaps in his training were filled ‘on the job’.

Mr Reid said Carr, of Denbigh Road, Denton, acknowledged his actions were not appropriate, but appealed for the judge to spare him jail.

Jailing Carr for 21 months, Judge Goddard told him: ‘You caused serious lasting injuries to a member of the public, in circumstances where it was your duty to prevent violence, not use it unlawfully.’

All other five defendants received suspended sentences and unpaid work.

Yasin, of Latimer Street, Oldham, who now works in a bakery, was sentenced to 15 months in prison, suspended for two years.

Ilayas, of Gainsborough Avenue, Oldham, who had been a doorman for 20 years previously, received a 15 month sentence suspended for two years.

Soliman-Bolagh, of Higher Lane, Whitefield, who is studying business management at university, was sentenced to 18 months in prison, suspended for two years.

Factory was temporarily stripped of its licence while a full review was carried out, a move unopposed by club bosses at a Manchester town hall meeting.

It was later allowed to re-open with conditions being added to its licence.

‘I hope that today’s result goes some way to providing the victim with some closure after his ordeal.

‘I would personally like to thank the members of the public who called police and aided officers by capturing the incident on their phones and handing their footage over as evidence. It massively helped us to build a clear picture of what happened that night.

‘Manchester offers people a fun and vibrant nightlife economy and we should be proud of that. No-one should be subjected to this kind of abuse at the hands of a security guard who is employed to protect people. Thankfully Carr will have some time to contemplate his actions.’