The widow of Bourke Street killer Hassan Khalif Shire Ali has admitted dumping a mobile phone used to speak with him in the seconds before his deadly rampage but denies she knew of his plans.

On Thursday Beyza Eren fronted a coronial inquest into her husband’s 2018 attack. She revealed intimate details of her turbulent marriage for the first time after refusing to ever co-operate with the homicide squad and counter terrorism investigators. 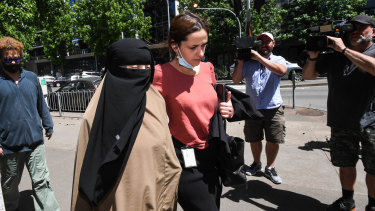 The wife of Shire Ali, Beyza Eren arrives at the Coroner’s Court on Thursday.Credit:Joe Armao

Shire Ali, who'd previously been found carrying ISIS material, called his then-wife as he prepared to set his ute alight in the heart of Melbourne before killing Pellegrini's co-owner Sisto Malaspina and injuring two others.

Police have spent the past two years trying to discover what was discussed during the minute-long phone call. Ms Eren told the court, under oath, that they spoke only about dinner plans.

It was also revealed that Ms Eren has since married "ISIS sympathiser" Sheikh Khoder Soueid, a controversial Islamic preacher from Melbourne who the couple had previously used as a marriage counsellor in the months before Shire Ali's attack. They now have a three-month-old child. 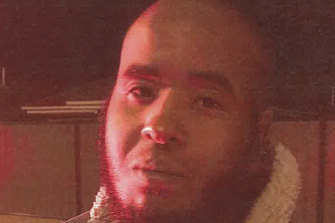 Hassan Khalif Shire Ali in the weeks before his fatal Bourke Street attack. Image taken by highway patrol officers during a roadside intercept in October 2018.

"This is the last phone call you ever had with Hassan and subsequent to this he efficiently blew up his car, then proceeded to kill … an extremely significant event. Saying you don't remember the contents of the final call to Hassan, I put to you it seems a little odd?" Ms Fitzgerald asked.

“He just seemed like he was in a rush and a bit anxious," Ms Eren replied.

Ms Eren's evidence cannot be used to prosecute her after the coroner granted her a certificate of indemnity from prosecution. Her lawyers had raised concerns that without the indemnity, the evidence Ms Eren gave could result in possible national security or terrorism charges.

It was revealed that in the weeks leading up to the attack she'd sent Shire Ali links to extremist Islamic material from people including Anwar al-Awlaki, a senior al-Qaeda leader killed in a US drone strike in 2011, and radical Australian preacher and Islamic State sympathiser Robert "Musa" Cerantonio.

Ms Fitzgerald said it was view of counter-terrorism investigators that Ms Eren and Shire Ali shared a religious ideology with an interest in jihad, martyrdom and ISIS.

She suggested the material – from extremist preachers who'd either died in the Syrian conflict, been a foreign fighter or were charged with terrorism offences – demonstrated this. They included one titled “Slicing the sword against the one who supports the disbelievers”.

“[I wanted to] to try and get him into religion a bit more,” she said. 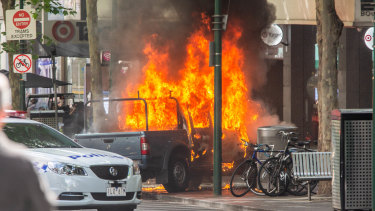 A general view of the scene on Bourke Street where Shire Ali carried out his deadly rampage.Credit:Stuart Gaut

Ms Eren said that on the day of the attack, she woke early and the pair drove in separate cars at about midday to a nearby mosque for the Friday prayer service. She said at the end, Shire Ali walked her to her car before he went on his way.

"He told me he wanted to sell his car," she said.

In the hours that followed, Ms Eren said she tried to call her her husband to find out where he was. Shortly after 4pm he called but she told the court she could not remember much of that final call. Soon after she said her mother-in-law called to say he'd blown up the car.

But when grilled about why she was so upset by the news, to the point she had to be consoled by neighbours, she was adamant she was only told that his car had exploded. 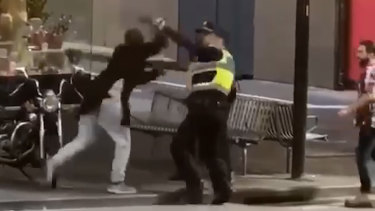 She was also unable to recall how or when she later learnt that her husband had been shot by police.

Ms Eren said after attending the hospital where she learnt her husband had died, she then removed her SIM card and threw her mobile phone down the drain because she "wanted to be left alone" and because there were intimate photographs of her on it she didn't want police to find.

But while under fierce questioning by Ms Fitzgerald, it was revealed in fact her mobile phone continued to ping off phone towers for the following two months.

"Are you telling the truth about having gotten rid of the phone?" Ms Fitzgerald asked. 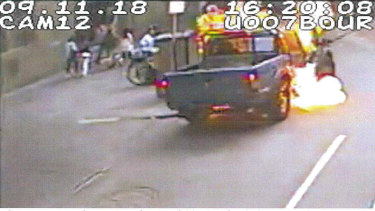 CCTV footage of a fireball surrounding the passenger compartment.

The inquest heard Ms Eren married Shire Ali in 2014, three months after meeting him on Facebook. The pair then had an on-again, off-again marriage marred by Shire Ali's infidelity and drug use.

In 2015 the pair attempted to travel overseas to Somalia but were stopped at the airport where Shire Ali was found to be carrying ISIS material.

Ms Fitzgerald said there was also police evidence that Ms Eren and Shire Ali had tried to keep their 2015 overseas trip a secret from the authorities and never planned to return.

Ms Eren said she had no memory of that and said they were only going to Somalia, but now admits it was likely Syria was where her husband intended to go.

Ms Eren said the pair then lived together on and off for the following three years before Shire Ali moved in with her and their young son in their Meadow Heights home in the months before the attack.

There, he became increasingly paranoid and believed everyone from their families and even spy agencies were following him and listening into his conversations through hidden cameras and radios.

“He was very secretive; he’d leave the house and not come back until late at night.”

But in the following year, she said her husband began becoming incredibly paranoid and revealed he’d begun hallucinating, believing his marijuana had been spiked.

“He started to become extremely paranoid. He would tell me that he thinks people are listening to him that they would hear everything that he's talking about. Every time he would leave the house he would come back claiming cars were following him," Ms Eren said.

“I do remember speaking to my mother-in-law. She had told me she felt there was something wrong with him. I’d say it's not normal to be this paranoid.