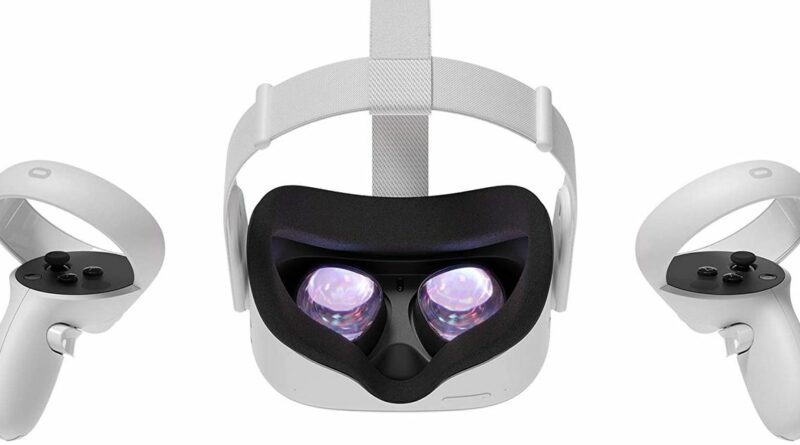 A furious mum has warned that Facebook's new must-have Oculus Quest virtual reality headset “could kill someone” after her son was rushed to hospital with a severe allergic reaction.

Lewis Gray, 13, was thrilled when his grandparents have him an Oculus Quest 2 for Christmas and couldn't wait to strap it to his head and get gaming.

It wasn't until the next day that his mum Kirsty Reed, 33, started to notice the skin around his eyes and forehead was starting to go red.

He was taken to hospital when his eyes started to swell shut, and doctors diagnosed an allergic reaction.

Kirsty later discovered that manufacturers Facebook had received 5,716 reports of facial skin irritation following use of the headset, with reactions including rashes, swelling, burning, itching, hives, and bumps.

Kirsty, from Chertsey, Surrey, said: "He played with it Christmas Day on and off over a period of a few hours.

"When he woke up on Boxing Day morning there was irritation along his cheekbones and on his forehead.

She gave him some antihistamines but the next morning his eyes were “nearly shut with the swelling."

When the doctor saw him, they suggested it was likely a delayed allergic reaction to the headset and prescribed him some antihistamines and precautionary steroids.

Kirsty said: "It's worrying because you don't know what's going to happen or if the reaction's going to go further onto the throat.

"Anaphylaxis was a major concern as the swelling was so much.

"The doctors had said if you get more irritation in his eyes or it swells more we would have to go straight back.

"It could have completely closed his eyes if it had continued.

"It's not very nice. I don't think he fully understood until he spoke to the doctor."

Support worker Kirsty looked into the issue, and found that the product had been temporarily recalled in July.

Facebook, who own Oculus, started receiving reports of skin irritation in December 2020 and started an investigation.

In April, they revealed that they had "identified a few trace substances that are normally present in the manufacturing process which could contribute to skin discomfort."

It added that, even though these were within industry guidelines, they had "changed [their] process to reduce them even further."

But, in July, another notice was put on the Oculus website stating that as more people had started using the headset, more cases came in.

They also then offered a free silicone cover to headset owners to protect their skin, and that all new units would include one from August 24.

A recall alert showed that Facebook received 5,716 reports of facial skin irritation, with reactions including rashes, swelling, burning, itching, hives, and bumps, following use of the Oculus Quest 2.

They also received over 40 reports of consumers requiring medical attention.

Kirsty said: "What I can understand from what I've read up is that it’s the foam on the headset itself and there is chemicals.

"But it doesn’t say anything could cause irritation in the information booklets that come with it.

"It took me some digging to find the issues."

Lewis' device did come with a silicone cover, but Kirsty claims there was no indication as to why it was included.

While there were warnings included for epilepsy and that the product wasn't suitable for children under 13, Kirsty couldn't see anything mentioning potential skin irritation.

She said: "It didn't even come with cover on it, it's separate which makes you think if this is an issue why doesn't it come with it on?

"It's a really high-tech gaming device that a lot of children want and we need this warning about the potential risks involved.

"Why are they still producing it exactly the same when they know there's a problem?

"Lewis is quite fortunate he doesn't have underlying [allergies] but for someone who's prone [to] anaphylaxis it could kill someone."

The furious mum-of-two contacted Oculus, who told her to stop her son using the product.

Facebook Reality Labs, who own Oculus, published a letter in July addressing the reports of skin irritation.

Boss Andrew Bosworth wrote: "We took the skin irritation reports very seriously as soon as we learned about them and, beginning in December, we promptly conducted a thorough investigation including receiving advice from leading dermatologists and toxicologists.

"These experts have advised that skin irritation can occur in some segments of the population from many household items—even things like tomatoes or shampoo—and that the rates we’ve seen are in line with expectations.