Northern Ireland Secretary Brandon Lewis is self-isolating after coming into contact with someone carrying Covid-19.

The secretary of state for Northern Ireland and MP for Great Yarmouth, 49, announced the news on Twitter this afternoon.

He tweeted: ‘I have been informed that I have recently come into contact with someone who has since tested positive for coronavirus.

‘While I do not currently have any symptoms, I am now self-isolating in line with Government guidance.’

On Sunday Lewis appeared on BBC One’s Andrew Marr show – which appeared to have been filmed in BBC’s New Broadcasting House, London – although his movements in the days since are unknown. 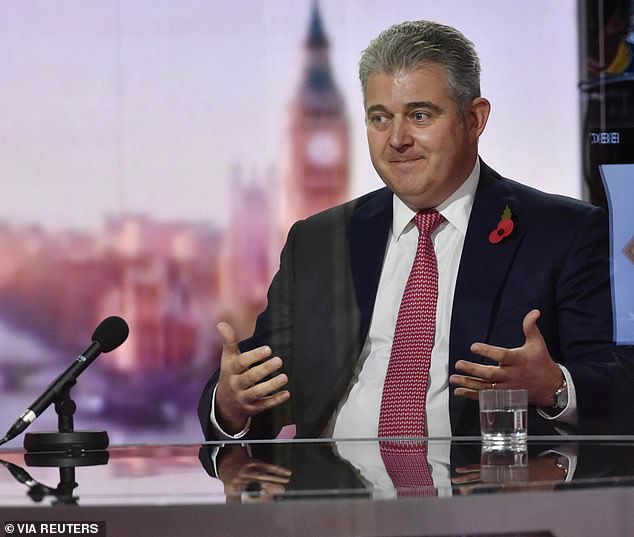 On Sunday Lewis appeared on BBC One’s Andrew Marr show – which appeared to have been filmed in BBC’s New Broadcasting House, London

On the show he defended the government’s decision not to fund temporarily free school meals over school holidays.

He also said the government had been considering ‘narrowing’ the government guidance surrounding the self-isolation period, potentially cutting it from 14 to 7 days – it currently stands at 14 days.

When questioned why some of the most vulnerable families in Britain are not being supported with £20m a week free meals, Lewis said that £63 million had been given to local authorities ‘because they understand what they need to do to make sure that those most in need can get the help that they need’.

He added: ‘We all want to see child hunger and child poverty fall.’

The secretary of state for Northern Ireland and MP for Great Yarmouth announced the news on Twitter this afternoon. 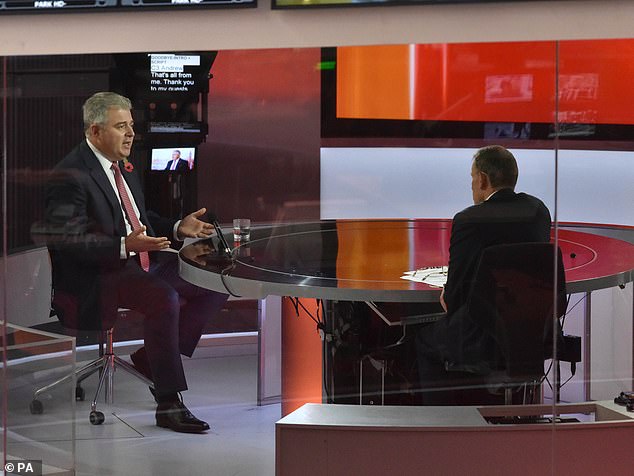 Lewis joins a long list of ministers who have spent time in isolation after being exposed to the virus.

And almost all of the cabinet have spent time self-isolating due to the virus, including Rishi Sunak, Chancellor of the Exchequer and Priti Patel, Secretary of State for the Home Department.

Chris Whitty, Chief Medical Officer and Ben Wallace, Secretary of State for Defence, had shown symptoms but were not tested – to public knowledge.

MPs to have caught covid include Nadine Dorries, who caught the virus in March, Chris Matheson, a shadow culture minister and MP for the City of Chester, and Bolton Labour MP Yasmin Qureshi who was recently discharged from hospital after receiving treatment for the virus.

Earlier this month MP Margaret Ferrier had the SNP whip withdrawn after travelling from parliament while awaiting the results of a Covid-19 test.

The Rutherglen and Hamilton West MP was stripped of the nationalist party’s whip and faces mounting calls to resign her £80,000-per-year job after an 800-mile round trip between her constituency and London.