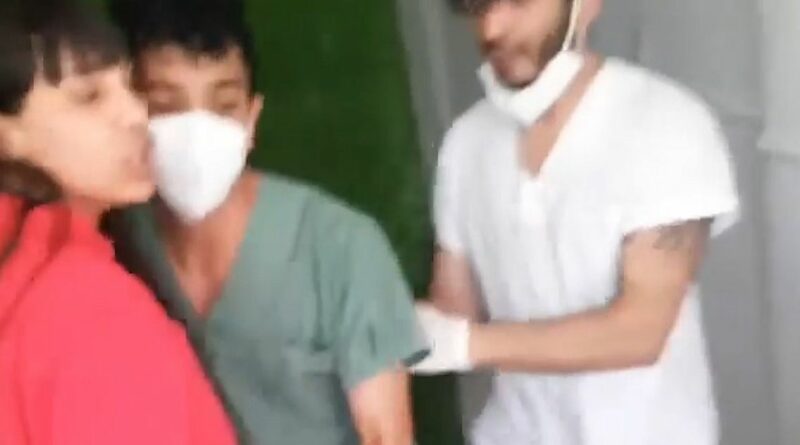 Footage has captured the moment a woman was violently removed from a beauty clinic after she demanded a refund for a botched procedure.

The brawl broke out between two technicians after Nadia Walezuk began to experience intense pain and swelling in her lips after having a hyaluronic acid lip injection at Time Estetica in Gregorio da Laferrere, Argentina.

The horrified customer decided to return to the clinic to lodge a complaint and ask for a refund of her £91 (ARS 15,000) deposit but was thrown out by angry medical centre staff on Thursday (October 7).

In the video, Nadia can be heard asking for a refund for the procedure that had reportedly left her 'deformed'.

But a male technician grabs her by the arms and begins to push her towards the door while he hurls insults at the woman.

A pane of glass then crashes, causing concerned onlookers to flee the clinic as the ongoing brawl becomes increasingly violent.

Speaking about the incident to local media, Nadia said: “He (the technician) told me that the clinic couldn’t get hold of the product I had ordered and that he couldn't return my deposit.”

“This man, at the time of the event, did not make me sign any consent (form).He went to get a syringe from the other side (of the room) and I didn't think to ask what he was going to put in me.

“He only used half a syringe because my lips couldn't stop bleeding, pain and swelling."

Nadia explained that she paid for the procedure aft researching it and finding out it was safe but returned home with bruised lips and came down with a fever.

She then stated that she went back to the clinic with a group of friends to ask to see the technician’s license and to find out what products had been used in the botched procedure.

She added: “My sister started filming the way he was attacking me. He hit her and her cell phone went flying, he wanted to break it. He went crazy insulting me and hitting me.”

Nadia added that the unidentified technician refused to tell her what product had been used on her lips but now plans to have the extraneous product extracted after reporting it to local authorities.