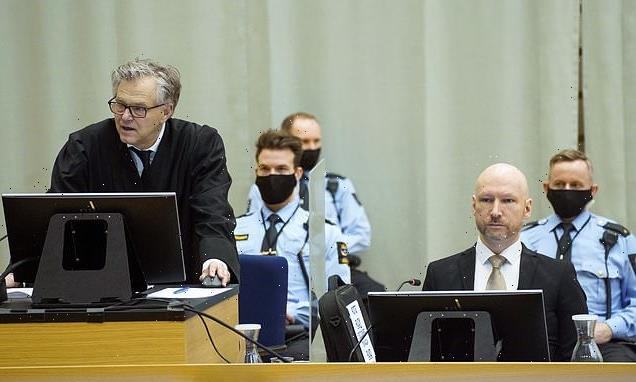 Anders Breivik is still a ‘very dangerous man’ who ‘cannot be trusted’ and has ‘not shown any genuine remorse’ for killing 77 people in Norway mass murder, final day of his parole hearing is told

A prosecutor in Norway said Thursday that a far-right extremist who killed 77 people in 2011 still is ‘a very dangerous man’ and therefore a poor candidate for release after 10 years in prison, as Norwegian law permits.

On the final day of a three-day parole hearing, prosecutor Hulda Karlsdottir said in her closing argument that Anders Behring Breivik ‘has not shown any genuine remorse in court’ and his behavior there is part of a ‘PR stunt.’

‘In the clear view of the prosecution, Breivik’s request for parole should not be granted,’ Karlsdottir said. 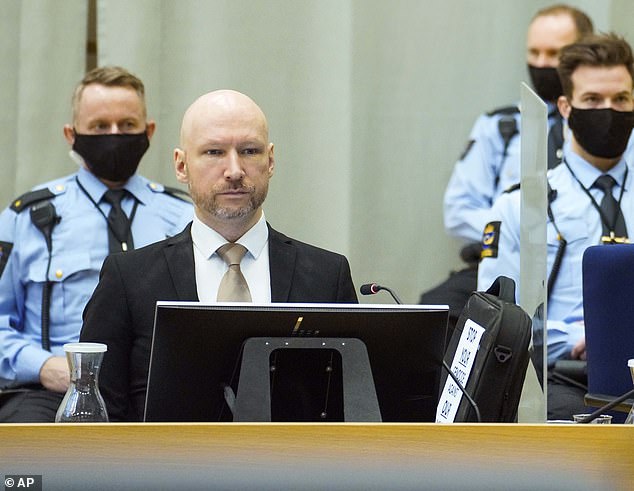 Breivik professed white supremacist views and flashed Nazi salutes on the hearing’s opening day, while claiming to have renounced violence. He repeated again Thursday, as he was given the last word as the hearing closed, that he was refraining from violence.

His lawyer Øystein Storrvik said in his closing arguments that Breivik should be released to prove that he is reformed and no longer a threat to society, and that is not possible to prove while he is in total isolation.

Storrvik called it ‘a paradox that a person is treated so badly in prison that he never gets better. He never gets out.’

A psychiatrist who has observed him since 2012 testified Wednesday that Breivik can’t be trusted. A prison official told the judges hearing the parole request ‘there is an imminent danger’ that, if released, Breivik would again commit serious crimes.

‘This court case just confirms how dangerous he is,’ Lisbeth Kristine Royneland, who heads a family and survivors support group, told The Associated Press.

Ahead of the parole hearing, they feared that Breivik would use the opportunity to express his views to likeminded people.

‘And that’s what he did,’ said Royneland who lost her daughter in the attack.

‘Obviously this has been extremely trying for survivors, the bereaved and Norwegian society as a whole,’ said Kristin Bergtora Sandvik, a law professor at Oslo University.

‘As we’ve seen in court, this is due procedure, due process being offered to a terrorist at the same level as anyone else, any other prisoner in the Norwegian system,’ she told the AP. 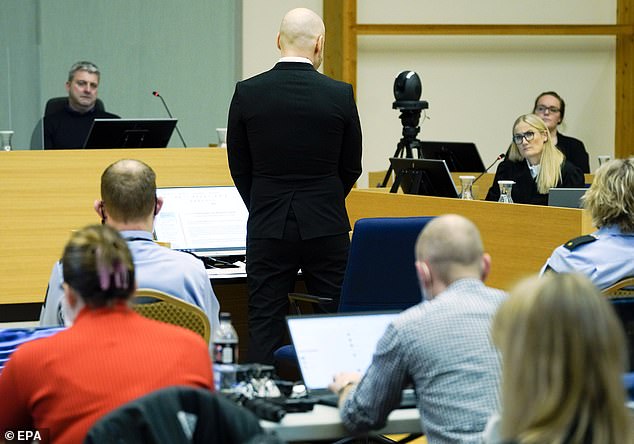 Breivik is appealing for early release from 21-year sentence he was given in 2011 for killing 77 people, most of them teenagers, in a bomb and gun attack

Breivik is serving Norway’s maximum 21-year sentence for setting off a bomb in Oslo’s government district and carrying out a shooting massacre at a summer camp for left-wing youth activists.

He has three cells to himself in the high-security wing of Skien prison.

The cells are equipped with video game consoles, a television, a DVD player, electronic typewriter, newspapers and exercise machines. He also has daily access to a larger exercise yard.

In 2016, he sued the government, saying his isolation from other prisoners, frequent strip searches and the fact that he was often handcuffed during the early part of his incarceration violated his human rights.

He was declared criminally sane at his trial, although the prosecution argued that he was psychotic. He didn’t appeal his sentence but unsuccessfully sued the government for human rights violations for denying him the right to communicate with sympathizers.

Although Norway’s maximum prison sentence is 21 years, Breivik could be held longer under a provision that allows authorities to keep criminals in prison for as long as they’re considered a menace to society.

The three-judge Telemark District Court is expected to rule on his parole request later this month. 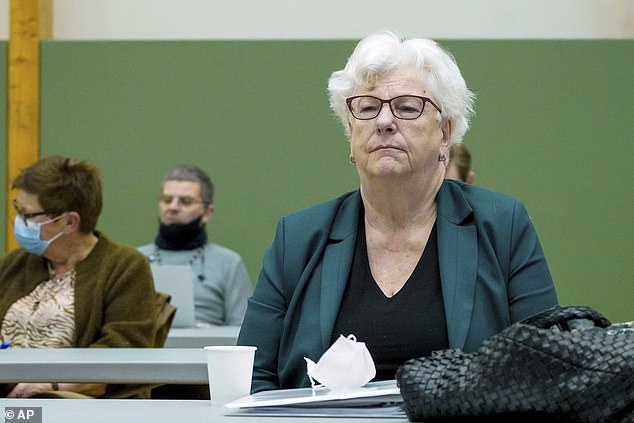 Breivik was declared criminally sane at his trial, although the prosecution argued that he was psychotic ()

Far-right terrorist Anders Behring Breivik gave a Nazi salute in court in Norway on Tuesday as he launched an unlikely bid for parole after a decade behind bars.

The 42-year-old also carried placards bearing white supremacist slogans, confirming victims’ fears that he will use the hearing in order to grandstand.

Despite presenting himself as the leader of a Norwegian neo-Nazi movement, the killer said he was ‘brainwashed’ when he carried out his terror attack ten years ago.

Breivik was sentenced to 21 years in jail – the harshest penalty possible under Norwegian law – for killing 77 people in a bomb and gun attack in July 2011.

Eight people died when a car bomb planted by Breivik exploded outside government offices in Oslo, and he then gunned down 69 others, most of them teenagers, in an attack on a summer camp run by the ruling Labour Party. 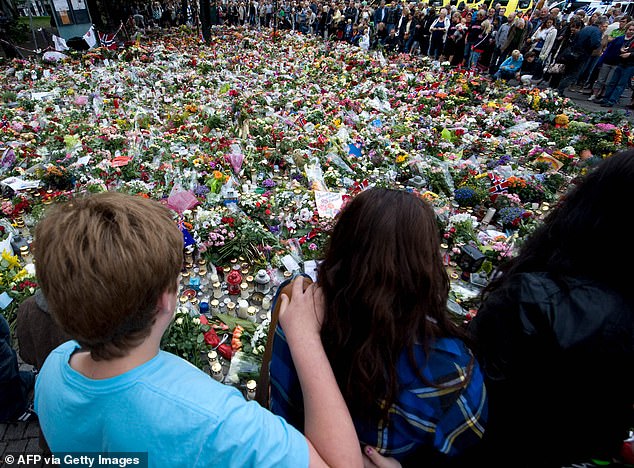 Breivik’s actions during the hearing suggests he saw the event as an opportunity to disseminate his racist views, though he tried to claim that he is no longer a threat to society.

He told the Telemark District Court that he would refrain from violence. ‘Today, I strongly dissociate myself from violence and terror,’ he said in a speech that lasted over an hour. ‘I hereby give you my word of honor that this is behind me forever.’

He added: ‘It is critical that you understand how brainwashed I was ten years ago. It’s not my fault I was brainwashed. It is those who brainwash online, who bear almost all the responsibility for July 22.’

Breivik has shown no remorse since the killings, having used his initial trial and subsequent human rights hearings to brag about the scale of the slaughter and make Nazi salutes in court.