Brutally beaten in her own BED: Elderly woman, 90, is left fighting for her life after intruder breaks into her home and repeatedly smashes her round the face in lawless London

A ‘defenceless’ 90-year-old woman is fighting for her life after she was brutally battered while lying in bed in the latest appalling crime to hit lawless London.

Shocking photographs reveal the horrific injuries inflicted on Iris Warner, who can be seen writhing in pain in hospital with her entire face and mixture of black and blue.

The pensioner was discovered up to two days after the attack, slipping in and out of consciousness, by her son Jeffrey Warner at her home in Brent, north west London.

An intruder broke into the house while Mrs Warner was still in bed, striking her over and over again with a weapon before rifling through her belongings.

Mrs Warner, who has been left with horrendous bruising down the entire length of her body, was so badly beaten over the head that she only remembers waking up to find her attacker stood over her.

It is the latest in a long line of violent assaults carried out in London this month, with crime figures on the rise across the capital. 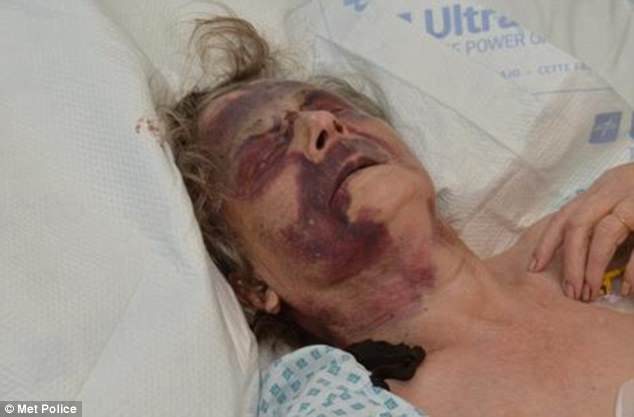 Iris Warner was discovered slipping in and out of consciousness by her son Jeffrey Warner at her home in Brent, north west London 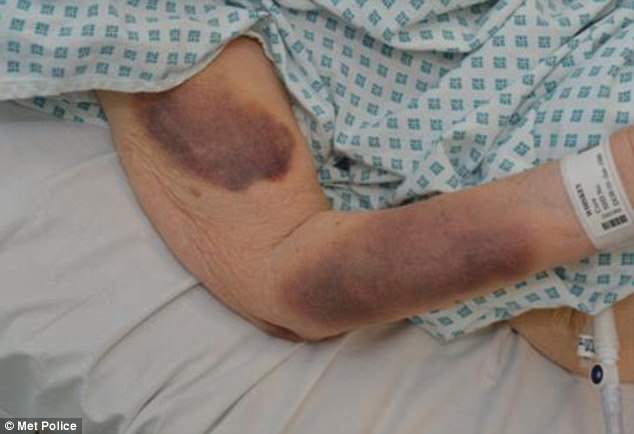 Her son Mr Warner, 60, and his sister Lesley Tranter have released shocking photo of their mother in her hospital bed which reveal the extent of her injuries

Earlier this week a woman, 24, was left fighting for her life after she was punched by moped muggers, while comic Michael McIntyre was robbed of his £15,000 watch.

Meanwhile, an Australian TV presenter had a £15,000 camera ripped from her hands.

The chilling muggings come as London’s murder rate was revealed to be higher than New York’s for the first time, with more than 70 killings so far this year.

Violent crime soared by 21 per cent last year, with 1.3 million offences recorded by police. Knife crime rose by 22 per cent.

The carnage of London’s streets continued again this week when a teenager, a man and a woman were hospitalised by shootings in Brixton

Mrs Warner, who has lived in the same London home for several decades, was rushed to hospital on Monday afternoon in a critical condition, with medics unsure if she would survive the attack.

Her son Mr Warner, 60, and his sister Lesley Tranter have now released shocking images of their mother in her hospital bed.

The family hope that the photographs will prompt a member of the public to come forward with information that will help police catch her attacker.

Mr Warner said: ‘We are shocked and appalled at the violence used against our mother Iris, better known as Anne to her friends and family – a defenceless 90-year-old-woman.

‘It has left us feeling stunned and sickened. We appeal for anyone with information that could assist police in their investigation to come forward. The person responsible must be brought to justice.’ 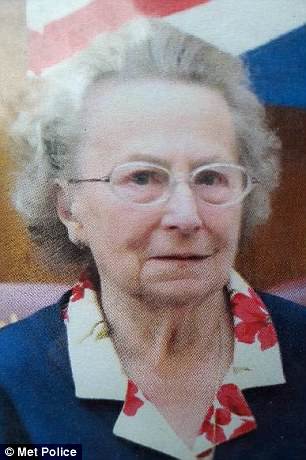 Although her condition has improved, Mrs Warner remains seriously ill and requires ongoing and intensive treatment, the Metropolitan Police said.

Officers believe she was attacked at some point between Saturday and Monday, but cannot be sure as Mrs Warner has been unable to provide a definitive account.

Her family said Mrs Warner is highly independent and uses the bus to travel to do her regular shops at nearby supermarkets.

She also visits the local newsagent every day, and is particularly fond of doing crosswords.

Detective Inspector Saj Hussain, from Brent CID, said: ‘This was a horrific attack carried out on a very vulnerable elderly woman in her own home, and must have been absolutely terrifying for Iris.

‘She has various medical complications on top of the injuries sustained in the assault that are likely to keep her in hospital for a very long time.

‘Her family are desperate for any information from the public that could help us catch this man.

‘We would like the public to think back to last weekend into Monday 4, June about what they might have seen in the Brampton Road area.

‘Finally, I’d like to remind the public that crimes of this nature are incredibly rare, so we do not want the public to be alarmed.’ 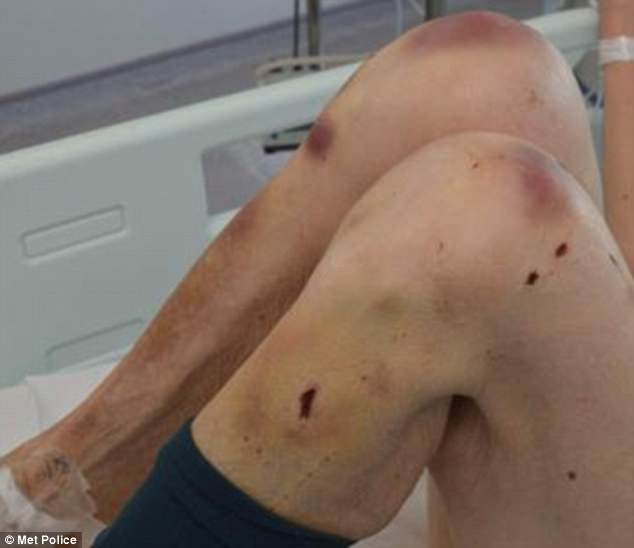