Boris Johnson could win a 100-strong majority at snap general election if he strikes a pact with the Brexit Party, Nigel Farage claims

Boris Johnson could get a 100-seat majority if he does a snap election pact with the Brexit Party, Nigel Farage claimed today.

Mr Farage renewed his appeal for the PM to join forces – but insisted it could only happen if the Tories committed to a ‘clean break’ from the EU.

He pointed out that the Brexit Party posted its ‘biggest scores’ in European elections in traditional Labour heartlands, suggesting Mr Johnson should give him a clear run.

In return the MEP said he would urge Labour Leave supporters to ‘hold their nose’ and back the Conservatives, arguing that a third might switch sides if he encouraged them.

The overtures came in an interview with Sky News’ Sophy Ridge as the Tory conference kicks off in Manchester today.

But they was dashed by Mr Johnson a short time later. In an interview with the BBC he was asked if he would do a deal with Mr Farage and he replied: ‘No.’ 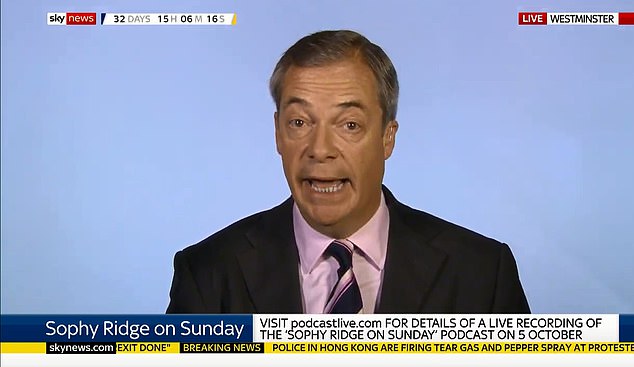 Mr Farage said: ‘I estimate he would have a majority of 60 to 100 seats… here is a way for Boris to get a big working majority.’

The Brexit Party leader said a ‘non-aggression pact’ could only happen if the Conservatives recognised that the UK should leave on WTO terms and then negotiate a new trade deal with the bloc.

He said that would be a ‘grown-up’ way of making sure the Eurosceptic vote does not split at an election.

Mr Johnson said that he would not entertain a non-aggression pact. He told the Marr Show: ‘The Conservative Party is the oldest, greatest political party in the world. It’s a broad church and we don’t do deals with other parties.’

Mr Johnson is facing a torrid time as he battles to keep his ‘do or die’ pledge to force Brexit by October 31 in the face of Remainer opposition.

The premier has insisted he will obey a rebel law obliging him to beg the EU for an extension if an agreement has not been struck by October 19.

But he has also insisted he will never request an extension to the Halloween departure date.

In a sign of the deep divisions in society, a poll today suggests nearly half the public say Mr Johnson should go to prison if he breaks the law.

But the Tories are also 11 points ahead of Labour on general election voting intention, and No10 believes Mr Johnson’s tough message is cutting through.

One Cabinet minister warned last week that there would be violent unrest if the government does not follow through on Brexit.

Remainers increasingly fear Mr Johnson will take drastic action to sidestep the law obliging him to seek a delay. 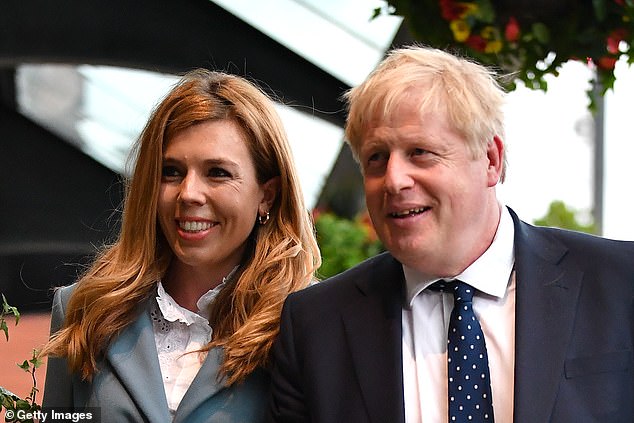