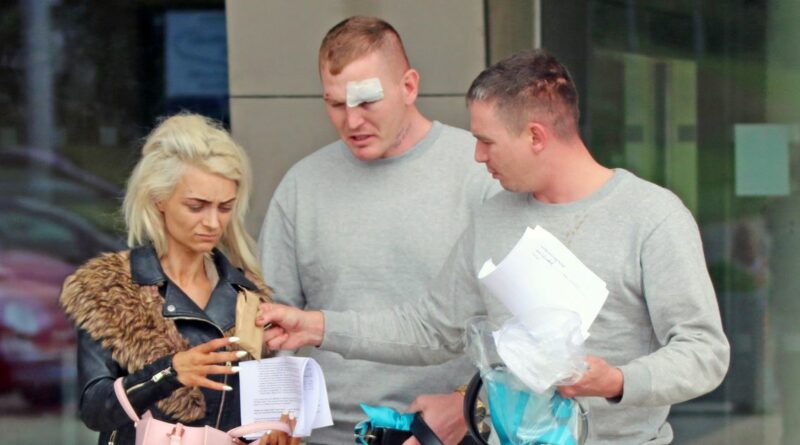 A loving couple's big day allegedly descended into a night of chaos when the bride, groom and best man all ended up in a prison cell following a huge brawl.

The dramatic wedding reception at Bathgate Hills in West Lothian in June 2019 saw bride Claire Goodbrand, 26, become one of several arrested when she assaulted her own mum, Livingston Sheriff Court heard.

The bride and her groom Eamonn Goodbrand spent their wedding night in separate cells before a day in front of the Sheriff the following Monday, reports the Daily Record.

CCTV reportedly captured the fracas spilling out of the wedding venue onto the grass outside.

The court heard Claire admit to seizing her mother Cherry-Ann by the hair, punching and kicking her on the head and body and causing her to fall to the ground and strike her head.

Eamonn and his brother Kieran Goodbrand, the best man, then allegedly weighed in, assaulting wedding guest David Boyd and leaving him severely injured.

The best man then apparently attacked another guest, injuring him as well.

After police arrived to break up the fight, the main players in the wedding party were all arrested and remanded in custody.

When they were finally released from custody Claire was wearing what appeared to be her going-away outfit while the groom and best man were dressed in prison-issue Primark tracksuits, still wearing their mud-stained wedding shoes.

Eamonn, 33 and a professional fighter according to his Facebook page, was seen sporting a head injury as he was freed.

Eamonn and Kieran both pleaded guilty to repeatedly punching and kicking Mr Boyd on the head and body while acting together. The charge states that they caused him to fall to the ground and continued their violent attack as he lay there.

They admitted pushing their thumbs into Mr Boyd’s eyes, biting him on the head and body and repeatedly seizing him by the neck and restricting his breathing, all to his severe injury.

In addition Kieran, 28, admitted assaulting Garry Brown by punching and kicking him on the head and body to his injury at the reception.

A reportedly 'red-faced' Claire Goodbrand pleaded guilty on indictment to assault to injury but not guilty to a more serious assault to severe injury.

He adjourned the case until 29 April for information on possible disposals, including social work supervision, unpaid hours of work and restriction of liberty by electronic curfew.