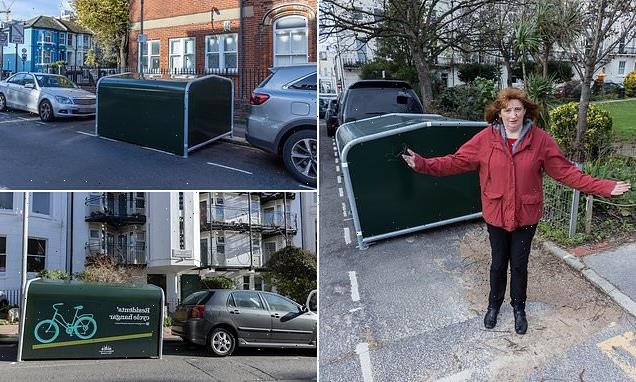 Motorists are furious with Brighton and Hove’s ‘woke’ council after it replaced much sought-after car parking spaces with bicycle shelters.

Scores of residents’ parking spaces have been scrapped by the Green council as they make way for up to 150 cycle hangars – which can each accommodate six bicycles.

The £500,000 scheme has left residents, who have paid up to £385 for an on-street parking space, fuming as they claim they can no longer park outside their homes.

They say the policy victimises motorists and those who are elderly or disabled and was pushed through ‘undemocratically’.

Some cycle hangars have been placed in the middle of two permit spaces, making it impossible for people to park outside their homes.

The council has faced a wave of controversy for a series of measures which have penalised motorists, including closing a lane on the busy seafront road and turning it into a cycle lane.

They are currently trying to ban parking along a busy road and said voting against the measures would be a vote to ‘dilute air quality measures’ in the city.

The council were accused of being ‘woke’ after it banned disposable barbecues on the beach and in public parks claiming they contributed to global warming.

Last year the council was also branded a ‘laughing stock’ after it banned weedkiller but blamed the resulting infestation on Brexit. 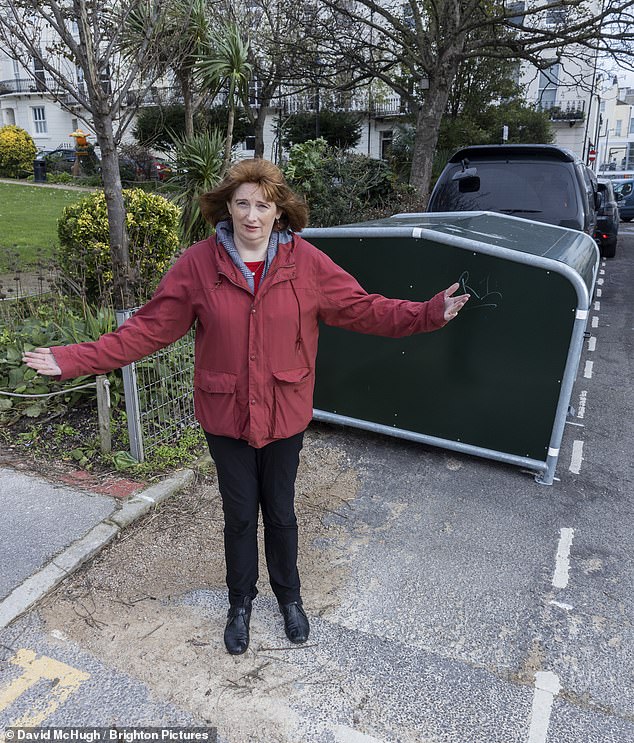 Brighton and Hove City Council has been accused of grabbing space from much needed residents car bays and giving them over to cycle hangars in the city (pictured: frustrated resident Laura King by a badly placed hangar) 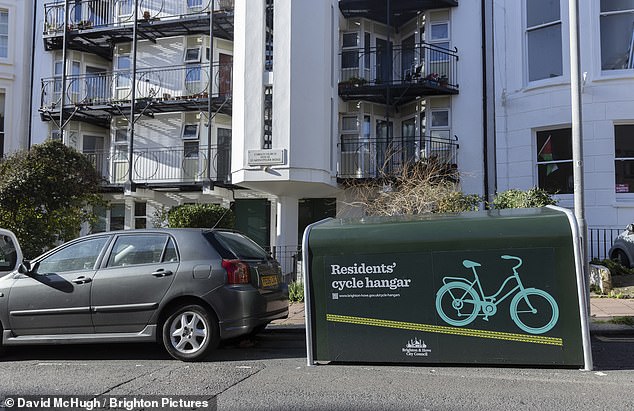 Drivers in Brighton and Hove currently pay the council between £60-£385 a year for a resident parking permit, depending on the vehicle’s emissions.

But with the council renting out cycle spaces at £60 each a year, it means each hangar will generate £360 a year.

Laura King, who lives in Hove, said: ‘This is absolute madness and seems to be another weapon in the Greens’ aim to push ordinary motorists out of the city.

‘These hangars are too large for the parking spaces and infringe on the pavement making them unsafe for pedestrians, especially wheelchair users and the visually impaired.

‘They also have no reflective strips on them to make them visible at night making them dangerous for motorists.

‘The hangars have been foisted on us and have cost council taxpayers £500,000 in a cost of living crisis when the council is shutting shown public toilets and other public facilities. It is shockingly undemocratic.’

Ms King, a member of Friends of Brighton and Hove Citizens’ Action Group, said: ‘The scheme should be stopped immediately and an investigation held to examine where the money came from and how the public were consulted.’ 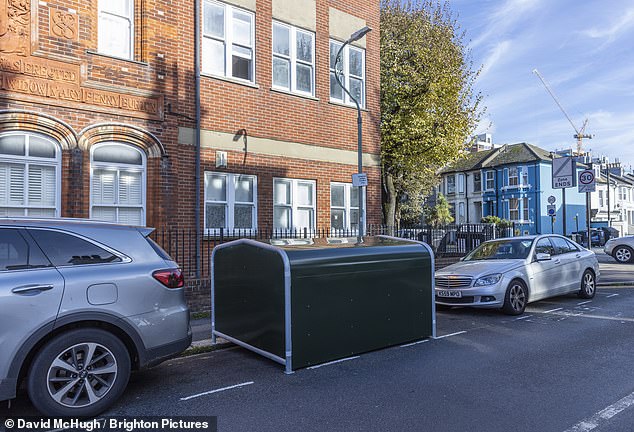 One of the 60 cycle hangars, which could increase to 150,  placed within a car bay Hove

Tory councillor Robert Nemeth said: ‘I am hugely concerned about this latest attempt by the Green/Labour Council to push through a controversial policy without the necessary democratic oversight.

‘Bicycle hangers should be shelved until a way of installing them that is not hugely detrimental to the nearest resident can be found.’

Ellie Reid, 34, said: ‘These hangars are madness and a perfect example of yet another pet project by our Green council that doesn’t make any sense.

‘They should concentrate on other green issues like improving our recycling levels as Brighton and Hove has the second worst record in the country.

‘Also we have pavements so covered in weeds and leaves they are unsafe to walk on, huge potholes in the roads and public facilities are closing across the city yet projects like these are green-lighted. This council should be placed in special measures.’

Brighton and Hove City Council say they have plans to bring in around 150 cycle hangars by Spring 2023, creating a total of 900 spaces for bikes.

The council hit back saying there was grass root support for the hangars and they were proving incredibly popular with cyclists.

Councillor Steve Davis, co-chair of the Environment, Transport and Sustainability Committee, said: ‘We began with the installation of 20 in July and saw a 100 per cent take-up rate in just a few weeks.

‘Since then we have installed 40 more, and all but one of the total of 360 spaces have now been snapped up. This means that 359 residents now have somewhere safe and secure to store their cycles.

‘We know that if we’re to get more people travelling actively and sustainably, we have to give them the right infrastructure. Cycle hangars provide people who live in homes with little or no storage space an opportunity to store their bikes safely and securely.’

A spokesperson for the council said: ‘We are aware of concerns relating to the cycle hangar in Norfolk Square and are investigating. We have nothing further to say about this particular issue’.