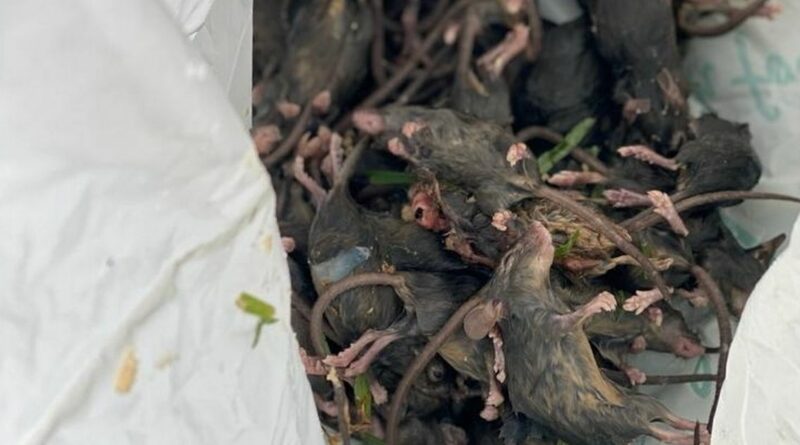 Britain has been blamed for Australia's biblical mouse plague.

Tens of millions of rampaging rodents have been terrorising farmers as they feast on crops and pillage grain stores.

The devastation stretches 1,000km from Brisbane down to Melbourne and has tormented rural communities for months.

DNA tests have now indicated a "strong link" between the mice and the species brought in to the island nation along with British convicts in 1788.

The US National Library of Medicine National Institutes of Health states: "Invasive species have a major impact on Australia, threatening native biodiversity and causing massive costs to agriculture every year.

"The house mouse is a highly successful invader worldwide and particularly throughout mainland Australia and surrounding islands.

"It has become a serious agricultural pest in Australia, particularly in grain-growing regions where it shows aperiodic but increasingly frequent outbreaks.

"Australia was probably the last continental landmass to be colonised by the house mouse, presumably remaining mouse-free until the arrival and settlement of the first Europeans colonists, about two centuries ago.

"The arrival of the British First Fleet in 1788 is often cited as the most probable origin of house mice into Australia."

Some have also argued the mice may have actually arrived on Dutch ships in the 1600s, the Sun reports.

The Australian government was last week set to blitz its mouse plague with "napalm for mice" amid fears the infestation could double every three weeks.

In just three months, two mice can spark a colony of almost 400, rapidly spawning to tens of thousands, the Daily Mail Australia reported.

The plague of rodents have caused untold damage to Australia's eastern coast, decimating crops and chomping their way through food storage units.

The mice have also invaded homes, schools and hospitals as they thrive after heavy rain and hot and dry spells led to a bumper harvest.

One family in New South Wales lost their home after mice chewed through their wiring, causing a house fire.

A government-funded MouseAlert website shows mouse sightings have doubled since March – with a surge in cases in and around Sydney.

Channel 10 News Sydney claimed the mice could now be "marching towards" Australia's biggest city to "invade" by August.

Farmers have been sharing images and viral videos showing mice pouring out of grain feeders and storage plants.

One video showed mice pouring out of a silo as workers tried to clean it out.

The horror footage was shared on Twitter by ABC reporter Lucy Thackray, who said it started "raining mice".