The Irish premier has warned Britain that it must keep some ties to the single market with Brexit in order to avoid a hard border with the Republic.

Leo Varadkar met PM Theresa May yesterday and said he would welcome any customs move which brought the UK closer to the EU.

Addressing the problem of a potential hard border would ‘require more than just customs’, the Taoiseach said.

Mrs May said Britain would have an ‘independent trade policy’ after its departure but Ireland has proposed a ‘backstop’ if no new customs arrangements are finalised before the end of the transition period, the Telegraph reports. 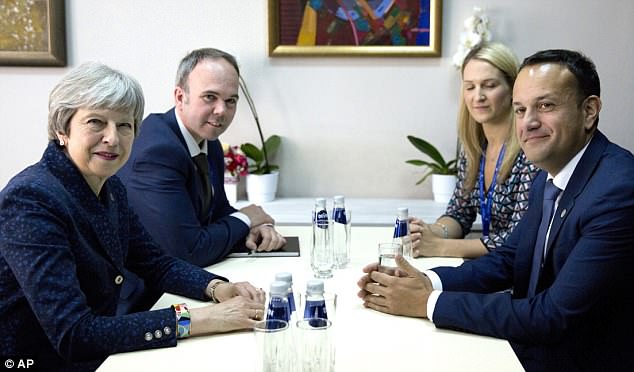 It came as Tory MPs last night warned Mrs May against shackling Britain to the customs union for an extended period after Brexit.

Whitehall officials yesterday confirmed that ministers have agreed a ‘backstop’ plan that could see the UK temporarily stick to EU tariffs.

Sources said it would only be invoked if new customs technology needed to prevent the creation of a ‘hard border’ in Ireland is not ready by the end of the Brexit transition in December 2020.

Any extension would be ‘time-limited’, they added. The move was agreed by Mrs May’s Brexit ‘war cabinet’ on Tuesday, despite reservations from Brexiteers including Boris Johnson and Michael Gove.

But the move raised fears the UK could become permanently shackled to the customs union, limiting the ability to strike new trade deals. A Whitehall source said ministers had discussed a possible extension lasting ‘months rather than years’. But officials have warned it could take as long as five years to implement a new customs plan.

Iain Duncan Smith said Eurosceptic MPs could accept a delay of ‘a month or two’ for practical reasons – but making provision for it now was akin to ‘planning for failure’. The former Tory leader said: ‘Pre-announcing an extension would be barking mad – you would send a signal to the EU that we don’t know what we want.’

The move is designed to placate Dublin and Brussels, which have warned they will block a trade deal unless Britain guarantees there will be no ‘hard border’ in Ireland. EU proposals to resolve the problem by keeping Northern Ireland in the single market have been condemned as ‘unacceptable’ by Mrs May as they would effectively put a border down the Irish Sea. Irish Taoiseach Leo Varadkar discussed the proposal with Mrs May yesterday while they attended a summit in Bulgaria. He said he was ‘not discouraged’ by the plan – and hinted it could lead to the UK remaining closely aligned with the customs union long term. 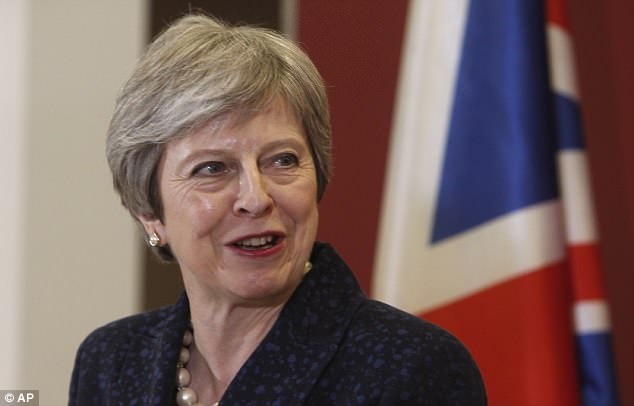 ‘Certainly any move on customs that brings the UK closer to the EU is to be welcomed,’ he said. In an ultimatum, he also suggested the UK could be forced to leave the EU without a deal unless Mrs May makes ‘substantial progress’ on the Irish border issue by next month.

The PM yesterday insisted she was not ‘climbing down’ and said the UK would be ‘able to operate an independent trade policy’ from the end of 2020.

Tory Eurosceptic Sir Bill Cash said he would be opposed to any significant extension of ties to the customs union, adding: ‘We must not give in to ultimatums.’ Jacob Rees-Mogg, chairman of the European Research Group of Tory MPs, warned that Britain risked being left in ‘purgatory’ in which the horizon would be ‘unreachable.’

But pro-Remain MPs welcomed signs of a compromise. Mrs May’s former deputy Damian Green said he was willing to accept a ‘small delay’ to ensure a smooth exit.

Ministers have also raised fears that Brussels is stalling talks while peers attempt to frustrate Brexit. EU negotiators are understood to be waiting to see how many of the 15 amendments pushed through by pro-Remain peers in the Lords are overturned by MPs.

Downing Street said the flagship EU Withdrawal Bill would return to the Commons in ‘weeks not months’.