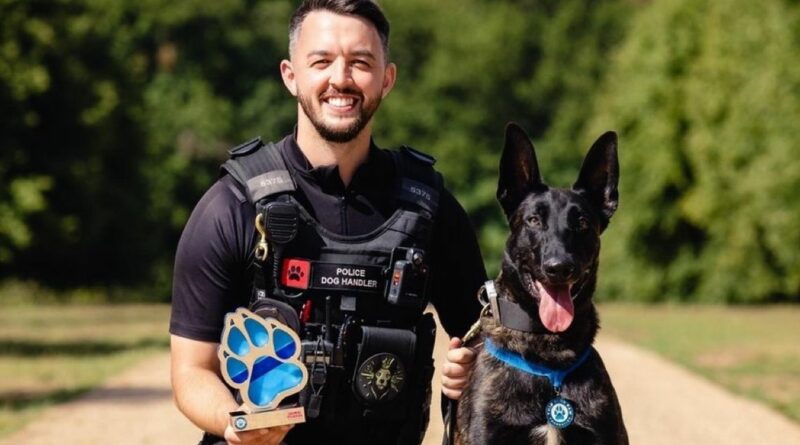 A dog handler and his canine sidekick have been named the UK's top police dog team at the Thin Blue Paw Awards.

It comes after an incident in which Toro, a three-year-old Dutch Herder, dragged a suspect from his hiding place by his private parts, one of many examples of crime fighting by the dog and handler PC Chris McDonough.

They scooped up the coveted award at a ceremony in Knebworth, Hertfordshire, put on by the Thin Blue Paw Foundation which supports serving and retired police dogs.

The pair were nominated by Chief Inspector Simon Newell, the head of Alliance Policing dog section for Cheshire and North Wales, for their impressive year of crime fighting which included finding missing people and making over 20 arrests in a single year.

McDonough and Toro's appear to be making names for themselves, having been on patrol during the G7 summit in Cornwall and also cropping up on the Channel 5 programme Motorway Cops where their exploits catching a serial thief by the genitals was caught on film.

PC McDonough said: "When I found out that we were getting the award, it was really humbling and overwhelming. For once, I was speechless.

"It’s nice to just get nominated for an award and to have a little bit of recognition for the work that PD Toro and I are doing, so to find out that we had actually won was great. I was made up."

Chief Inspector Newell said: “The road to becoming a dog handler and getting your own crime fighting canine is an arduous one which takes dedication and skill.

"I’m very proud of our team of dog handlers and their dogs here at the Alliance."

Kieran Stanbridge, trustee of the Thin Blue Paw Foundation said: "PD Toro is still only a few years into his career and has already showed an incredible natural aptitude for the role, as well as complete commitment to getting the job – whatever that is – done."

Toro lives with PC McDonough, who has been with Cheshire Police for 11 years and has worked as part of Alliance Policing’s dog section since 2016.

McDonough puts their success down to the special relationship he has with the police pooch.

He said: "The bond we’ve got is fantastic. We are best mates. I spend more time with him than I do with my friends and family. He’s a great colleague, and over the past two-and-a-half years we’ve become inseparable.

"My missus says I love him more than I love her, so that tells you what the bond we’ve got is like."