Could British Airways be forced to shift operations to SPAIN? Airline seeks support from Madrid to keep flying in case of no-deal Brexit

The owners of British Airways are seeking help from the Spanish government to ensure they can keep flying if there is a no deal Brexit, it was revealed today.

Theresa May’s Brexit deal appears to be on a knife-edge and could see Britain suffering a disorderly Brexit, which rivals including Ryanair’s Michael O’Leary say would be catastrophic of IAG.

IAG today told MailOnline it would not move its management headquarters in London to Spain, where it is registered as a company.

But experts believe that they may have to take evasive action including buying out British shareholders or risk being broken up unless they can convince the EU to relax its strict ownership laws.

The worst case scenario if a deal is not reached planes could be grounded on April 1 – the day after Brexit – while the UK Government negotiates access to the European Common Aviation Area again or tries a new deal completely. 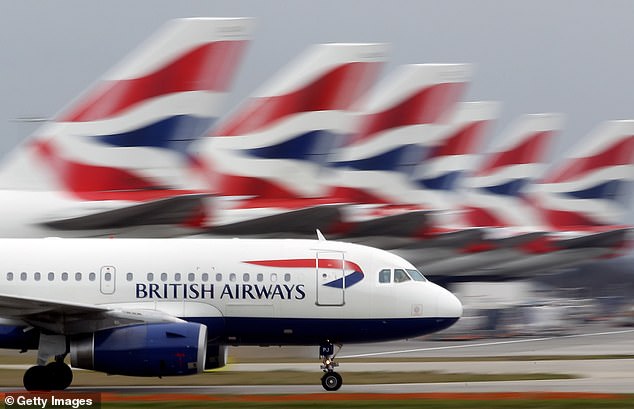 The International Air Transport Association, which represents some 290 of the world’s airlines, says a no-deal would be a disaster for UK airlines.

What would happen to British airlines if there was a no-deal Brexit?

Experts have warned millions of air passengers could be grounded in the event of a no deal Brexit.

The IATA said last month that planning for a no-deal Brexit needed to move much faster to ensure planes can keep flying and safety and regulatory frameworks keep functioning whatever the new relationship between the pair after March 29.

He warned: ‘On April 1 it will be us, the airlines, who have to manage millions of passengers potentially grounded in airports unable to take a flight … It will be a nightmare in European airports and UK airports’.

They say ‘thousands, millions of passengers’ would be stuck because of grounded flights in the worst case scenario.

The most likely consequence is that the EU would treat British airlines like American ones, stopping them flying within the EU.

This would mean British airlines like easyJet who fly between France and Germany, for example, could be stopped.

This would mean that routes could disappear or be taken over by more expensive European airlines.

It could also lead to fewer flight from the UK to Europe.

In order to keep freely flying EU routes all airlines must prove they are owned and controlled by EU citizens, with at least 50 per cent of all shares held inside the EU.

When Britain leaves the EU in March its UK shareholders will no longer be classed as EU shareholders, with some predicting IAG’s required level will fall below 50 per cent because British Airways is such a huge part of its business.

BA’s boss Willie Walsh has insisted it is ‘nonsense’ to suggest a no-deal Brexit would stop BA flights but last month the EU’s top transport official said she ‘will not bend the rules’ to help IAG if the UK crashes without a deal.

Violeta Bulc, EU transport commissioner, told the Financial Times: ‘If there is no deal [between the EU and UK], I don’t need to point out which side the EU will be on’, adding: ‘It’s Spain that we will have in mind’.

British Airways’ owners said today they are ‘confident’ a no deal Brexit will not cause any problems for them.

But industry experts have said they may have to shift ownership to Spain to avoid a catastrophe with some analysts predicting IAG may have to find billions to buy out a quarter of its shareholders or risk being broken up.

British-owned airlines would lose the automatic right to operate air services between the UK and the EU without seeking advance permission.

One from October 1, sent to IAG’s president Antonio Vázquez, confirms contact with the European Commission to ‘address the incidence of Brexit in the ownership and control of the IAG group airlines located in Spain’.

IAG was formed in 2011 when British Airways combined with Spain’s national carrier Iberia and the group, which carries 105million passengers each year, owns Ireland’s Aer Lingus and budget airline Vueling.

Industry experts have said that a no deal would break up the company into two businesses: BA for Britain and the rest of its airlines in a European company.

Michael O’Leary of Ryanair, said last year: ‘They’re hoping that it’ll go away. They’ll have to front up to how catastrophic it is at some point though. They don’t know themselves [how to solve it]. But their shareholders will have to sell, and the group has to get broken up’.

IAG said it is ‘confident that we will comply with the EU and the UK ownership and control rules post-Brexit’.

A spokesman added: ‘We remain confident that a comprehensive air transport agreement between the EU and the UK will be reached. It’s in the UK and EU’s interests to have a fully liberalised aviation agreement. Aviation liberalisation has been a great success story across Europe benefitting one billion customers each year and creating a huge number of jobs across the continent. Even if there is no Brexit deal, both the EU and UK have said they will put an agreement in place that allows flights to continue’.