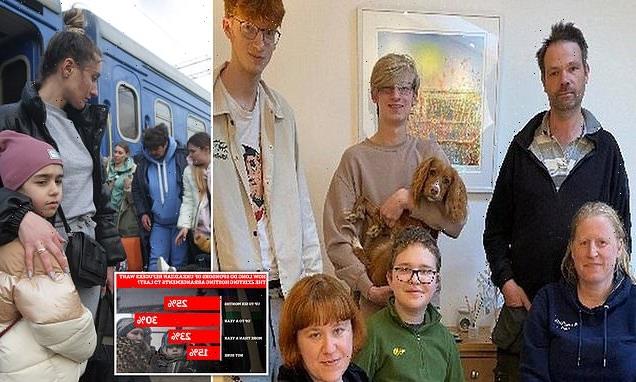 ‘It’s been a lot harder than we thought’: British hosts regret taking in so many Ukrainians as a quarter say they are quitting the scheme

A retired couple have admitted taking in Ukrainian refugees was ‘a lot harder than we thought’ as they expressed regret in housing so many under the Homes for Ukraine scheme.

It comes as a quarter of British hosts are set to quit the government-backed programme in the coming weeks, citing the cost-of-living crisis, inflation and soaring energy bills.

Hosts have also complained of delays in receiving their monthly £350 grants, which are paid by the government for each Ukrainian family housed, and Government figures show at least 145 placements have led to the refugee becoming homeless after the sponsor-guest relationship broke down or the accommodation was deemed ‘unsuitable’.

Robin and Sue, both in their 60s, are currently caring for four members of the same family – spanning three generations – at their home in the sleepy village of Oakhill, in Somerset.

The town of just 700 has taken in at least 30 desperate Ukrainians, who were forced to flee their homes following Vladimir Putin’s barbaric invasion, now in its sixth month.

Robin and Sue’s living room is often filled with seven refugees – the four they took in and three from next door – while they’re ‘immaculate garden’ has been turned into a football pitch, reported the BBC.

While Sue said it was ‘lovely to hear children playing and laughing’ as ‘that’s the best gift’, Robin later admitted: ‘It’s been a lot harder than we thought.’

He told the BBC Radio 4 Today programme: ‘We’re both in our 60s, we knew there’d be some extra work looking after them and when they first came there was lots of extra work because we were ferrying them here, there and everywhere. 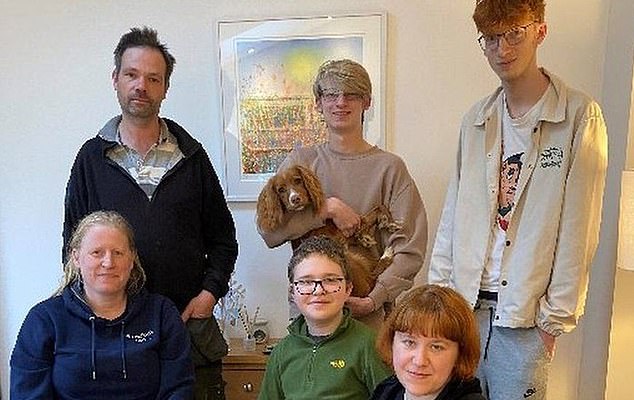 The Bridges family with Maryna and Vlad and their teenage sons Charlie and Jack in the 700-strong village of Oakhill, Somerset, which has housed more than 30 refugees 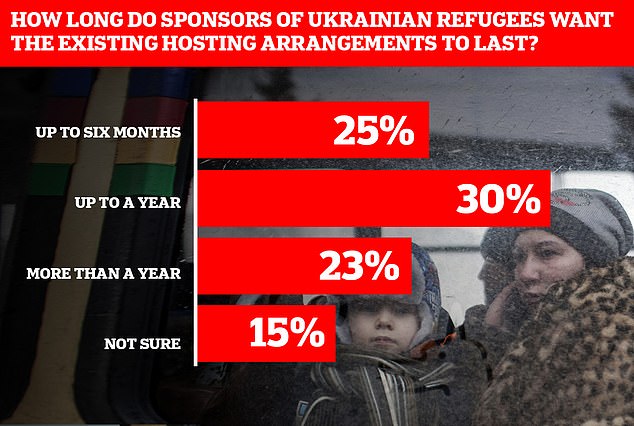 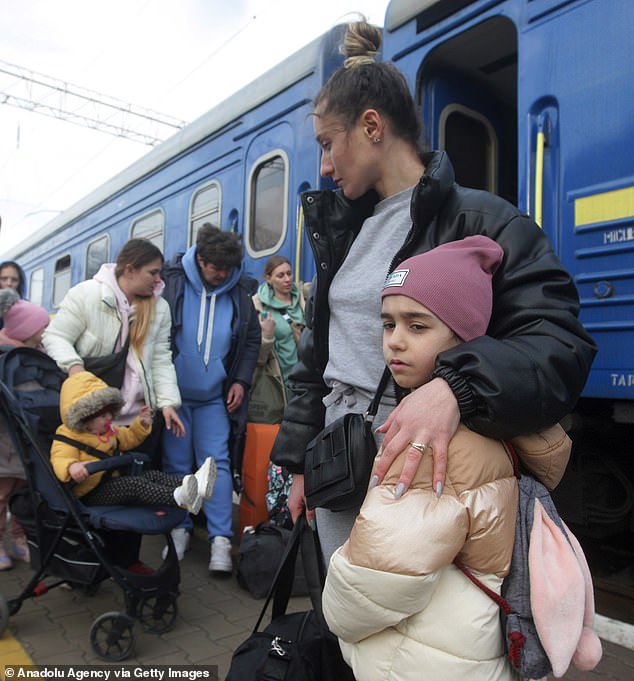 ‘Get the bank account settled, sort out the mobile phone contracts, get set up so they can use phone over here.’

He added: ‘We think about it… if we did it again we would do it for less people.’

Organiser Vicki Bridges warned: ‘If you’re a sponsor, with the best will in the world, you’re inviting a complete stranger into your home and that can be quite difficult.’

She added that the Oakhill community has worked hard to help each other, with a support group to exchange ideas and tips set up for hosts.

Ms Bridges said: ‘Like the saying says it takes a village to raise a child, it’s the same theory… I don’t think any of us would have been quite so successful at it if we didn’t have each other.’

It comes as it was revealed this week how Ukrainian refugees are being evicted by their host families because of payment delays to the Government’s flagship Homes for Ukraine scheme.

Some 1,335 people who fled to the UK after Vladimir Putin’s invasion are now listed as either homeless or at high risk because of a breakdown in relations with their sponsor.

The Mail on Sunday reported that in several cases this is because of long delays to the £350-a-month ‘thank you’ payment, which has left volunteers having to dip into their own pockets to ‘cover the cracks’. 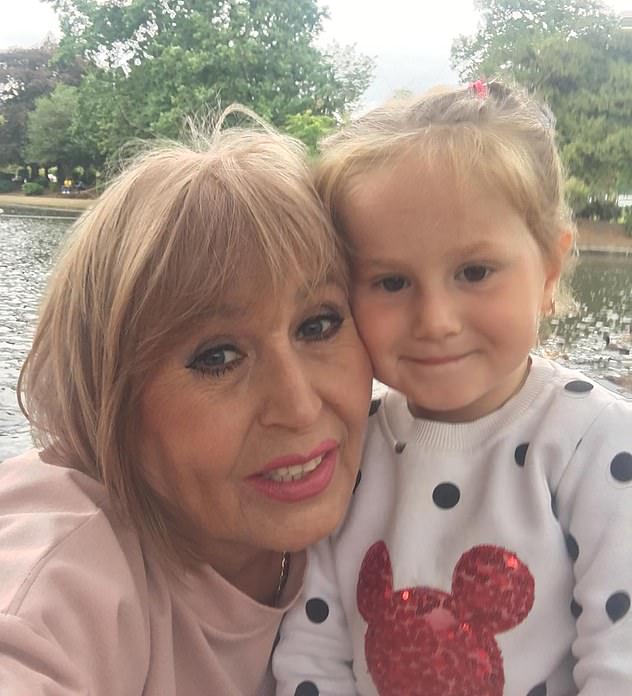 Mariia Suslova, 65, was living in a sponsor home with her daughter-in-law Natalia, 41, and three-year-old granddaughter Sofiia but they were asked to leave a few weeks ago 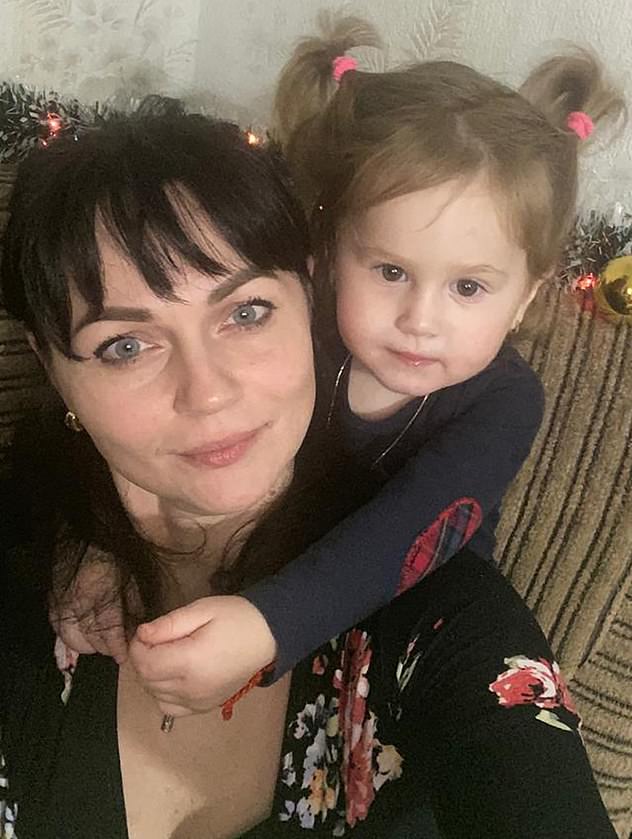 Natalia with daughter Sofiia. The little girl’s grandmother said their hosts became ‘annoyed’ by having a toddler in the home. The family are now staying in a hotel, hoping to find private accommodation

Ministers could double the £350 monthly payments to British hosts of Ukrainian refugees as they face demands to provide more help.

According to the PoliticsHome website, the Government could act by doubling the monthly ‘thank you’ payment to host households to £700 – if they are willing to extend their offer of accommodation beyond the minimum six months.

Around 2,000 hosts have already signed an open letter to ministers asking for more support.

In their letter, organised by the Sanctuary Foundation charity, the hosts wrote: ‘Please consider increasing the amount of the ‘thank you’ payments, particularly where hosts are looking after multiple persons, where hosts are offering accommodation beyond six months, and for households who are bearing the brunt of the cost-of-living crisis.’

They also urged ministers to provide funds to top up Universal Credit housing allowance for Ukrainian refugees, and to ensure funding to support English language lessons for those who have fled Vladimir Putin’s invasion.

Treasury sources told MailOnline the Government would continue to monitor and review the support provided under the ‘Homes for Ukraine’ scheme.

They pointed to how the current £350 monthly payments have already been exempted from tax.

Simone Schehtman, a volunteer who has paired hundreds of Ukrainian refugees with hosts across Birmingham and the West Midlands, said: ‘In general, local authorities have been very slow at delivering the payments and this has put some hosts under huge pressure.

‘Most hosts thought they were going to be paid by the end of April, but in Birmingham the first payments came through last month.’

She added that some hosts were on benefits themselves.

‘Delays and rocketing bills have caused some host-refugee relationships to fracture, and I have personally wired several hundred pounds of charity donations to hosts to cover the cracks,’ she said.

The Homes for Ukraine scheme launched in March with the Government giving payments to councils to distribute.

But the Local Government Association, which represents 361 councils in England and Wales, told the MoS it only received the money in June and was having to backdate payments.

Tetiana Bilousova, 37, and her two children were evicted last month after her sponsor said they hadn’t received any payment.

‘The day I was evicted, there was no discussion,’ she said.

‘I came home from work and suddenly I was told that tomorrow a woman would call me to move us into a hotel.

‘They did not try to find a compromise or talk through any problems. I had no idea that the Government had failed to pay them.

‘Nobody was at fault, but sometimes English people can forget we just fled from war and that leaving Ukraine was not a happy experience.

‘I think maybe the hosts misunderstood why I was in a bad mood and crying.

‘Yes, my children are safe with me, but my mother and husband are still in Ukraine.’

There are fears that many more Ukrainians will be evicted in the coming weeks, with councils obliged to ensure they still have a roof over their heads.

‘We are really worried about what is going to happen,’ said Lauren Scott, executive director of the charity Refugees at Home.

‘We have had several Ukrainians asking us to find them new hosts.’

Mariia Suslova, 65, was living in a sponsor home with her daughter-in-law Natalia, 41, and three-year-old granddaughter Sofiia but they were asked to leave a few weeks ago.

She said: ‘At the start, everything was great and we were very grateful to be there. We were told, ‘Our house is your house’, but this did not last long.’

Mariia said the hosts became ‘annoyed’ by having a toddler in the home and the family are now staying in a hotel, hoping to find private accommodation.

The charity National Family Mediation, which usually works with divorced couples, is training Ukrainians to act as mediators to ease any stresses between the refugees and their hosts.

Meanwhile Refugee Minister Lord Harrington and Ukraine’s ambassador to the UK, Vadym Prystaiko, have been writing to host families to encourage them to carry on.

A Government spokesman said that since the February invasion, more than 115,200 Ukrainians had arrived in the UK.

They added: ‘The overwhelming majority of people are settling in well but in the minority of cases where family or sponsor relationships break down, councils have a duty to ensure families are not left without a roof over their head. 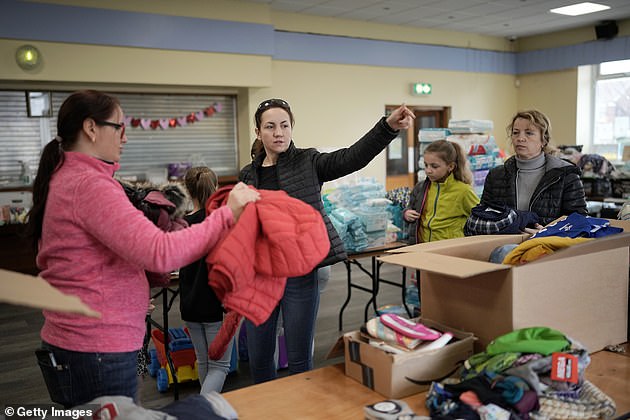 ‘Councils also have access to a rematching service to find a new sponsor in cases under the Homes for Ukraine scheme.’

It comes after a survey this month found that 26 per cent of UK hosts wanted to stop housing the refugee living with them after the minimum required time of six months, with a quarter of that number blaming the burdens of the cost of living crisis, according to the Office for National Statistics.

Around 70 per cent of sponsors also said that inflation and the rising costs of bills hindered their ability to provide support to their refugee, and almost all of those surveyed said they have incurred extra costs during the scheme.

This is despite the Government paying them £350 a month as a ‘thank you’.

The Homes for Ukraine Scheme, which was launched in March, brought in around 75,000 fleeing refugees into the UK.

Sponsors had to agree to a minimum of six months when signing up to the scheme, but the cost of living crisis has meant that more than a third of Britons are now ‘struggling financially’ due to the rising costs of bills, fuel and the weekly food shop.

Government figures also showed that 145 placements led to the refugee becoming homeless, due to the relationship with their sponsor breaking down or the accommodation being deemed ‘unsuitable’ before they had even moved in.

Councils have now become concerned about the number of hosts who no longer want to continue housing their refugee, and the Local Government Association chairman James Jamieson is calling for the Government to increase the monthly ‘thank you’ payments.

Jamieson said: ‘There is a significant risk that – even if rematching is available – many Ukrainian families may need to present as homeless because of a lack of sponsors or other options. 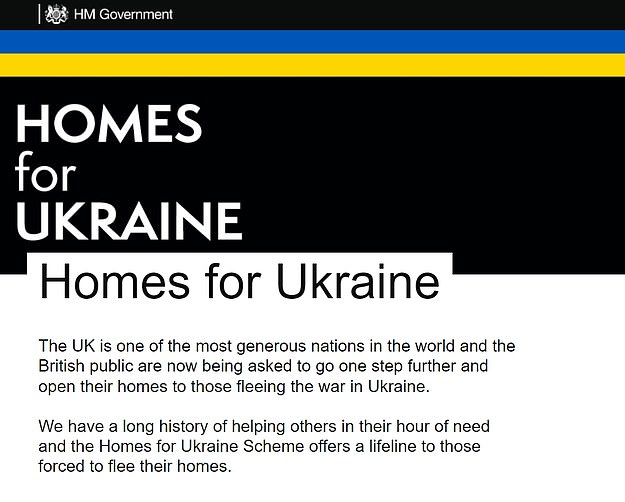 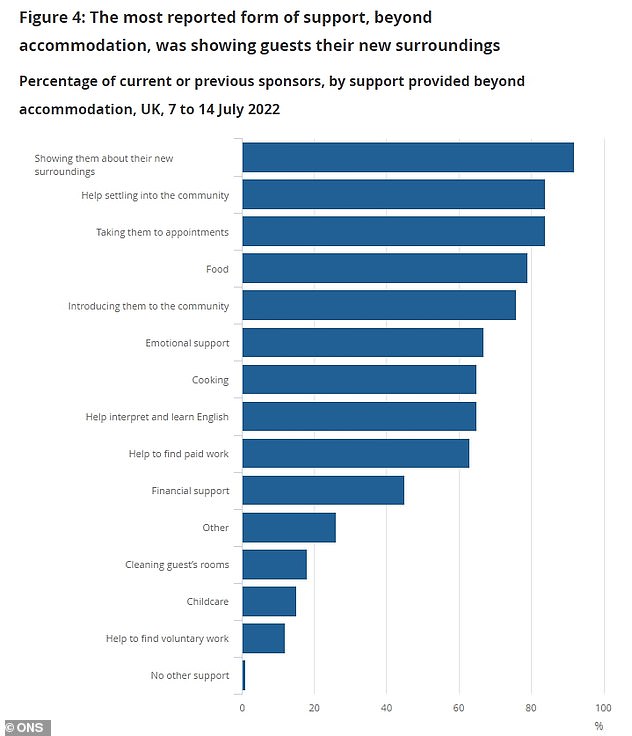 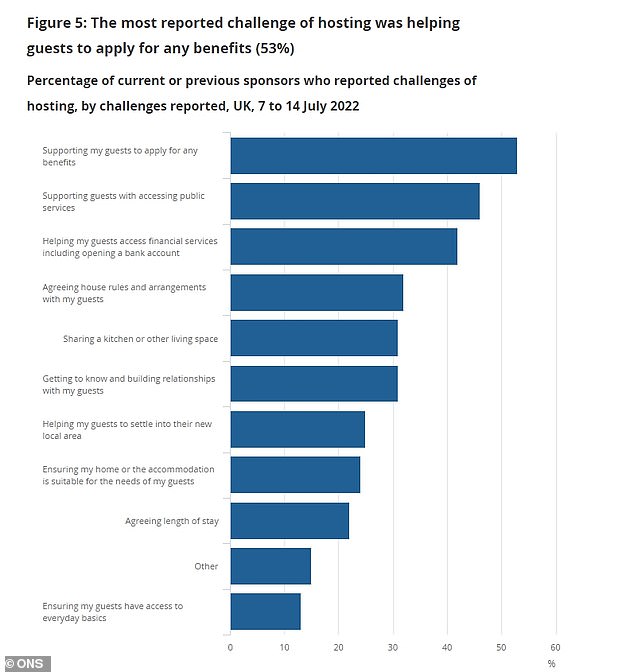 ‘We hope a number of Homes for Ukraine sponsors continue to house Ukrainian refugees with them and we are talking to the Government about how we might encourage that.

‘For instance, increasing the thank you payment to a higher amount so the sponsors can be sure it’s not costing them

Refugees minister Lord Richard Harrington said: ‘We initially asked sponsors to host for a minimum of six months and we are working closely with councils to ensure Ukrainians have a safe place to live if they decide to move on.

‘We are contacting sponsors directly to outline next steps and the support available to them.’