A British tourist who was touring the Americas by motorbike has died after a horrific road smash in Brazil, it was reported today.

Christopher Peck, 34, was just two weeks into the four-month holiday which would take him through South, Central and North America, when he was mowed down by a car which had pulled out to overtake a truck near the Bolivian border.

Half his left leg was ripped off in the accident on April 20, which also left him with a broken femur and fractured pelvis. 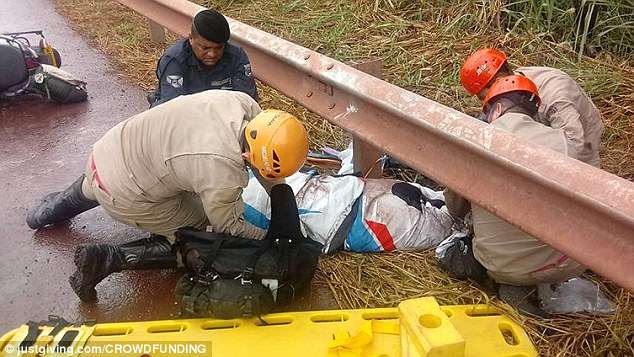 Christopher Peck, 34, from Cumbria, has died after he broke all of his ribs, lost his left leg below the knee and was placed into a coma after being hit head-on by a drunk driver in Brazil

He spent 13 days in a critical condition in a local hospital in Corumba, midwestern Brazil, before losing his fight for life this morning.

But Christopher’s family, from Workington, Cumbria, today slammed the British insurance firm he had taken a policy out with after it refused to pay for treatment which could have saved his life.

Brother Sean claimed they desperately tried to get World Nomads to pay to move him to a specialist hospital in Sao Paulo, but it used a “get out clause” claiming he was riding the “wrong type of bike”.

Instead fisheries officer Christopher, who was on leave from working in the Falklands Islands, was treated at a local public hospital with limited facilities.

Sean said: ‘The insurance let him down very badly. It is a sin that Christopher thought he had covered everything, to be told “no” when it was needed.’ 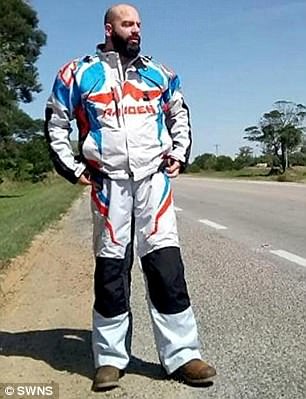 Chris was at the start of his biking adventure around Brazil and North America, and was not planning on coming home until August 8

Shocked local doctor Dr Manoel Joao, who was treating him, claimed the company had ‘dropped the young man in the s***’.

He added: ‘I’m absolutely certain that if Christopher had been moved to a bigger hospital with better facilities, his chances of surviving would have been much, much bigger.’

Because of the remote location of the accident, paramedics took an hour-and-a-half to get to the scene of the crash, where they found Christopher still conscious despite his injuries and heavy loss of blood.

He managed to tell the crew who he was and the name of the hostel where was staying before he lost consciousness, according to reports.

The driver of the VW Gol which hit him, Wagner Souza Filho, 32, failed a breathalyser test at the scene but was found to have too small an amount of alcohol in his blood to have affected his driving.

He was fined around £600 and lost his licence for a year under Brazil’s strict zero tolerance drink driving rules, but could face charges of dangerous driving if Christopher’s family choose to pursue them.

The farmhand, who was not injured in the crash, told police it was raining at the time of the accident and, as he overtook a truck on a straight stretch of road, water thrown onto his windscreen obscured his view.

Local reports stating that he been released for a similar offence hours before the collision turned out to be false.

The owner of the Road Riders Hostel where Christopher was staying, Diego Alle, alerted his family back in the UK and his brother Sean, 47, and their mother Sylvia, rushed to Brazil to be at his bedside at the Santa Casa hospital in Corumba, arriving two days after the accident. His elderly father was not well enough to travel.

On Sunday Christopher, who broke all his ribs in the collision, appeared to be getting better after opening his eyes and responding to stimuli, and the family was preparing to fly him back to the UK to be treated on the NHS.

But on Monday he suddenly took a turn for the worse and started to struggle to breathe, and doctors feared he had picked up an infection. He quickly deteriorated and died this morning. 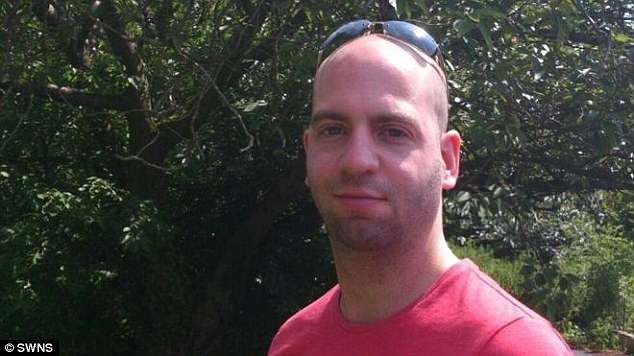 Mr Peck’s family  tried to raise £200,000 for ‘lifesaving operations’ via JustGiving, after they said his health insurance company had refused to pay for treatment

Dr Manoel Joao, intensive care director at the Santa Casa hospital, said: ‘Christopher was already in a critical condition, he had waited a long time to be rescued, he’d picked up a lot of dirt, and he’d lost at least eight litres of blood.

‘He’d suffered an “open book” fracture of the pelvis, which is the worst kind. He was improving but we were constantly fighting an infection which didn’t go away, and which unfortunately turned into a general infection.

‘This morning he suffered a cardiac arrest and I managed to resuscitate him, but then he suffered a second which he didn’t recover from. I had to call his mother and brother and tell them he hadn’t made it.’

Hours after his death, Christopher’s brother Sean, whose own son also died in a motorcycle accident, blamed the insurance company which had sold him an “adventure” policy for denying him the chance to survive.

He said his brother had taken out cover with World Nomads, which advertises insurance for ‘independent’ travellers and boasts ‘one of the longest lists of covered activities’.

But he claimed the small print which said he was only covered for motorcycles up to 125cc was ‘almost impossible to see’ and designed for people taking out insurance to not notice.

Other insurance policies he took out, from his bank Halifax, and another covering his motorbike from Alianz, also refused to cover the cost of his medical care.

He said: ‘We can’t help feel that Christopher was let down by the insurance companies.

‘I’m not angry, just sad. Christopher thought he was completely covered. But when his life depended on the insurance, they said he wasn’t insured for the type of bike he was riding.

Sean said the family will be considering legal action against World Nomads insurance, and have even filmed another family member taking out the same insurance to prove his claims that the company hides the fact motorbikes bigger than 125cc are not covered by its policies.

Dr Manoel also criticised the insurance company, which he claimed called him to find out about Christopher’s condition.

He said: ‘A lady called me from England. I explained how serious things were for Christopher and how he needed specialised care. Even after knowing that they kept giving the family the runaround and then just dropped the young man in the s***.

‘I didn’t agree with what the British insurance company did.

‘Before Christopher’s condition worsened I told the family that if they took him to a bigger, more advanced hospital, or even took him on a plane to the UK, he would have a better chance. But the insurance company kept delaying things and the opportunity was lost.

‘I can’t say that he would definitely have survived if that had happened. But I’m absolutely certain that if Christopher had been moved to a bigger hospital with better facilities, his chances of surviving would have been much, much bigger.’

Brother Sean also criticised the British embassy in Brazil which he claimed did not help them in their attempts to save Christopher’s life and ‘only turned up today’.

But he heaped praise on the Brazilians who have helped the family, including doctors and nurses from Brazil’s national health service, saying: ‘The hospital in Corumba and especially Manuel Jose and his team have been very caring and did everything they could. They gave us so much love and hope, we have been truly warmed.

‘Also Diego Alle from Road Riders Hostel who in this awful time has been so very kind and generous. With the support and help of these people and their teams, we have been blessed.’

Christopher, who was just at the start of his biking adventure around Brazil and North America, was not planning to return home until August 8, after being on leave from working in the Falklands.