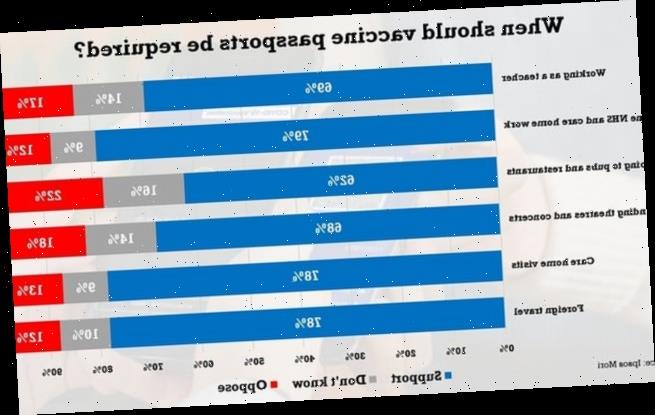 Britons back vaccine passports: More than three-quarters say they support them for foreign travel and working as a teacher or NHS medic and six in 10 say they SHOULD be required for a visit to the pub

The British public overwhelmingly back the need for people to show Covid passports, including to go to the pub, a new survey suggests today.

Almost eight in 10 people (78 per cent) polled by Ipsoso Mori supported people having to show proof of a coronavirus vaccine to travel abroad or visit people in care homes.

And there was strong backing for them to be required to work as a frontline NHS medic or in a care home (79 per cent) as well as in schools (69 per cent).

It comes amid a backlash against Government plans to force care home staff to get the jab amid lower than expected take-up.

Controversially there is also strong support of the use of passports to be allowed into pubs and restaurants once the hospitality industry reopens.

There has been loud condemnation of the idea from the industry and politicians on civil liberties grounds.

But Ipsos Mori found that 62 per cent of Britons would back their introduction for people wanting to go for a pint or a meal with their family and 63 per cent want them to be used for people going to the gym. 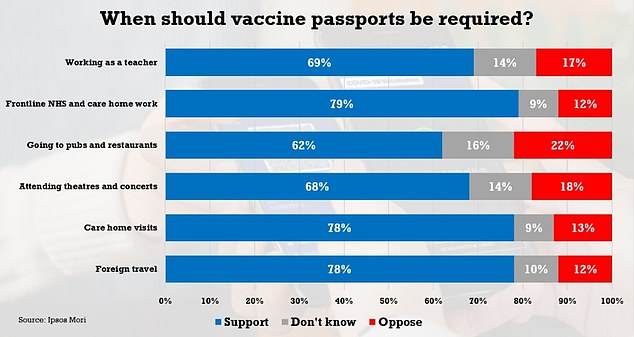 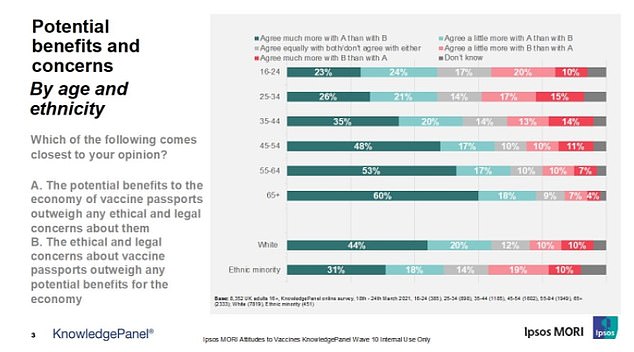 A similar amount felt that the benefits to the economy outweighed any social concerns.

The poll also found that 65 per cent of people would be more likely to buy tickets for a ‘large public event’ if they knew it has a passport policy.

Some 59 per cent said they would also be more likely to hire a plumber for work on their home if they had proof of being vaccinated.

But Britons were divided by age and ethnicity on the issue, with younger Britons and those from minorities –  who have seen lower vaccine take-up – also less supportive of passports.

Kelly Beaver, managing director of public affairs at Ipsos MORI said: ‘Our UK KnowledgePanel findings show that the public are once again prepared to do what it takes to get out of this pandemic.

‘While they recognise the issues around vaccine passports, particularly their potential to exacerbate existing inequalities, their potential importance to ending lockdown and reopening the economy has won the argument for the majority of the British public.’

Ipsos Mori interviewed a representative sample of 8,352 people aged over 16 in the UK. Interviews were conducted online from March 18 to 24.