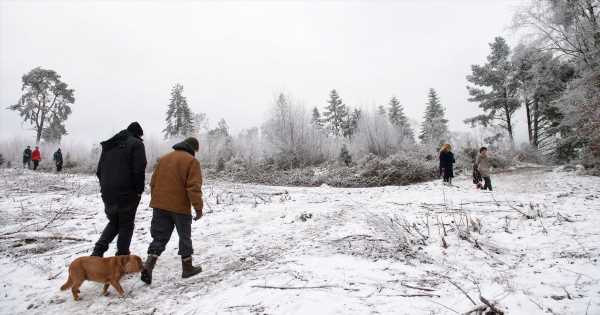 Britain is set to be blanketed with heavy snow and blizzards next week, as fears Beast from the East 2021 is forming.

Freezing conditions, as low as -10C, are set to hit the UK.

Previously, meteorologists confirmed a sudden stratospheric warming (SSW) is happening over the Arctic, which is the same event that happened before the Beast from the East three years ago.

When this happens, the warming can affect the jet stream which regulates the weather in the UK.

If it is disrupted or reversed, Brits could face the same icy conditions currently north of Scandinavia.

A yellow weather warning has been issued by the Met Office for northern parts of the UK from 5am Wednesday until Thursday 9pm.

There is a "chance of a period of heavy snow across this region" which has also warned it could cause significant travel disruption.

The weather agency also warns of power cuts across parts of northern England and Scotland on Thursday due to the heavy snow.

The long-range forecast speaks of "significant snowfall on the boundary between milder and colder air masses" as we venture into February.

Met Office forecaster Craig Snell said: "The stratosphere above the North Pole has warmed, it started its process on the 4th of January and has been rapidly warming over the last few days."

Daytime temperatures could plummet to -5C by the end of the month and into the next.

Simon Lee, an atmospheric science and weather forecasting researcher at the University of Reading, told  The Mirror : "A weakening of the jet stream often occurs after an SSW, meaning the UK is now more prone to outbreaks of colder weather from the north and east than it was before.

"A weakened polar vortex can last for up to two months, so there is an increased likelihood of colder, drier weather occurring in Europe sometime in the next 4-6 weeks due to weaker Atlantic westerly winds."

However, not all SSW events lead to a Beast from the East, but forecaster John Hammond, from Weathertrending, told The Sun the stratosphere is 'misbehaving' again.

As well as snow, ice warnings are in place for Scotland and the north of England tomorrow.