Britain is currently basking in an extended 30C heatwave, which has seen the nation bask in scorching weather, with Northern Ireland even issuing a hosepipe ban. 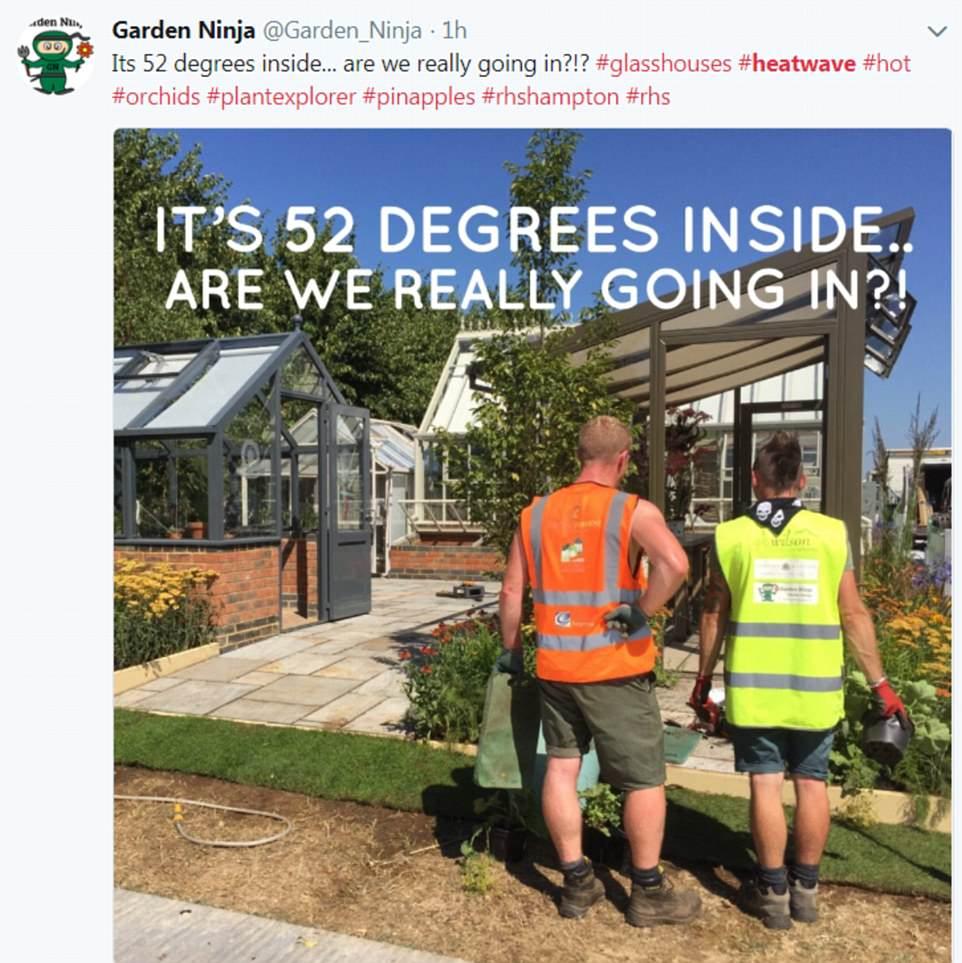 This compares with average temperatures for the time of year of 17C (62.6F) in the north and 21C (69.8F) in the south, senior forecaster Marco Petagna said.

However, rising temperatures have not put a curb on Brits' humour as many have taken to Twitter to lament the boiling weather.

One Twitter user Garden Ninja said: "Its 52 degrees inside… are we really going in?!" 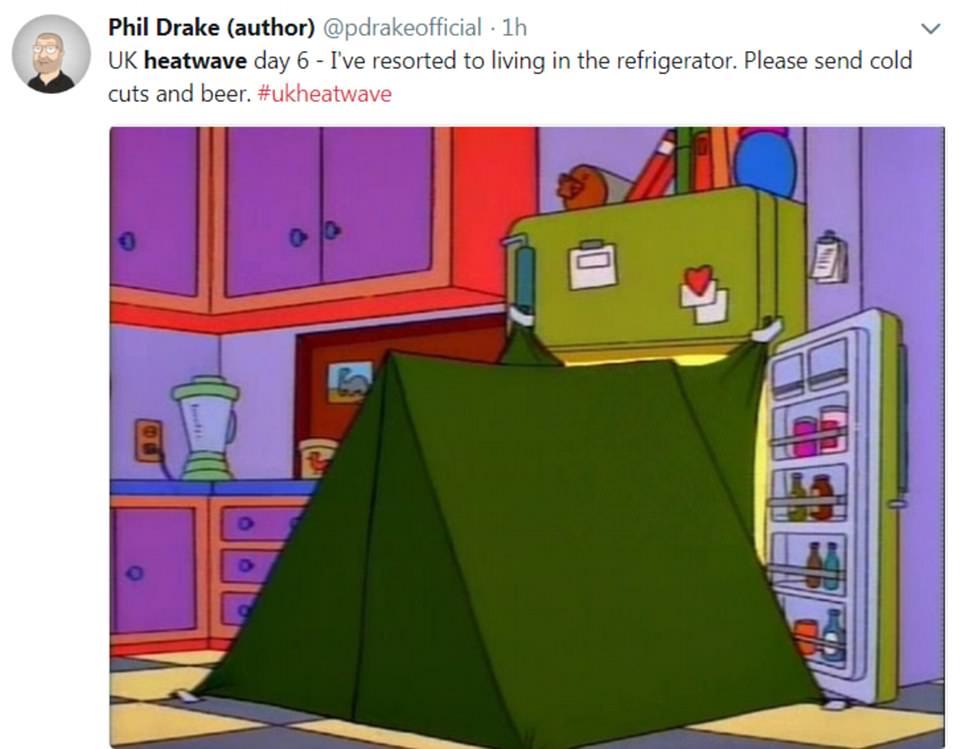 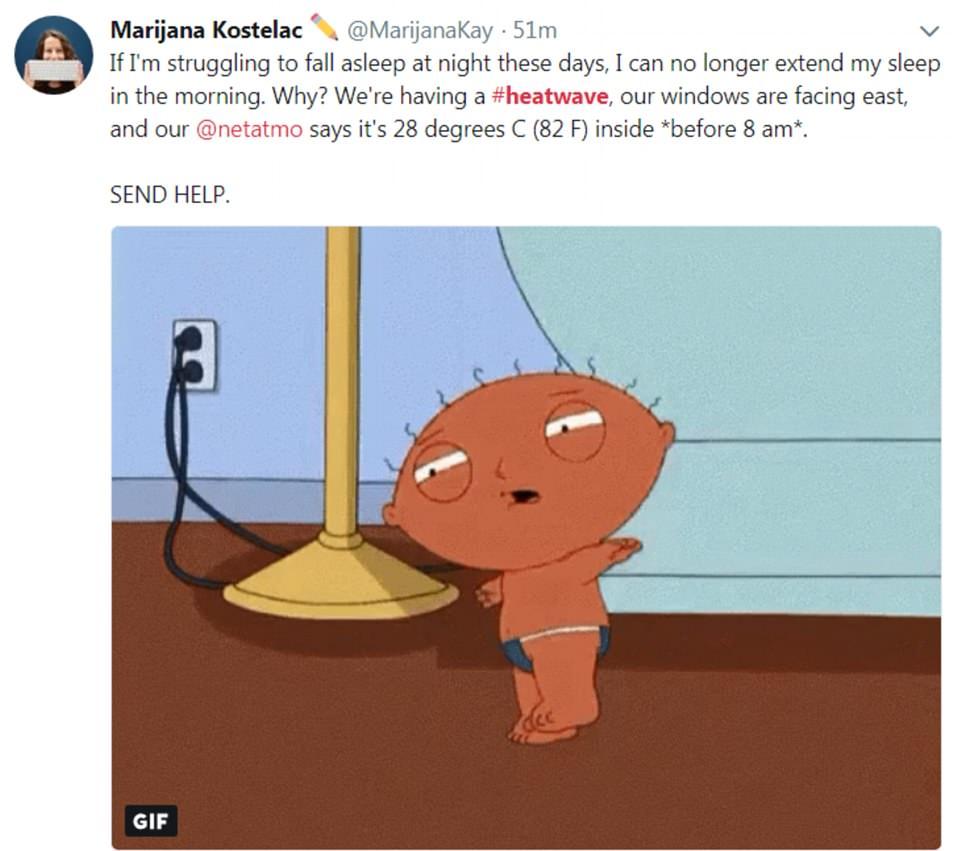 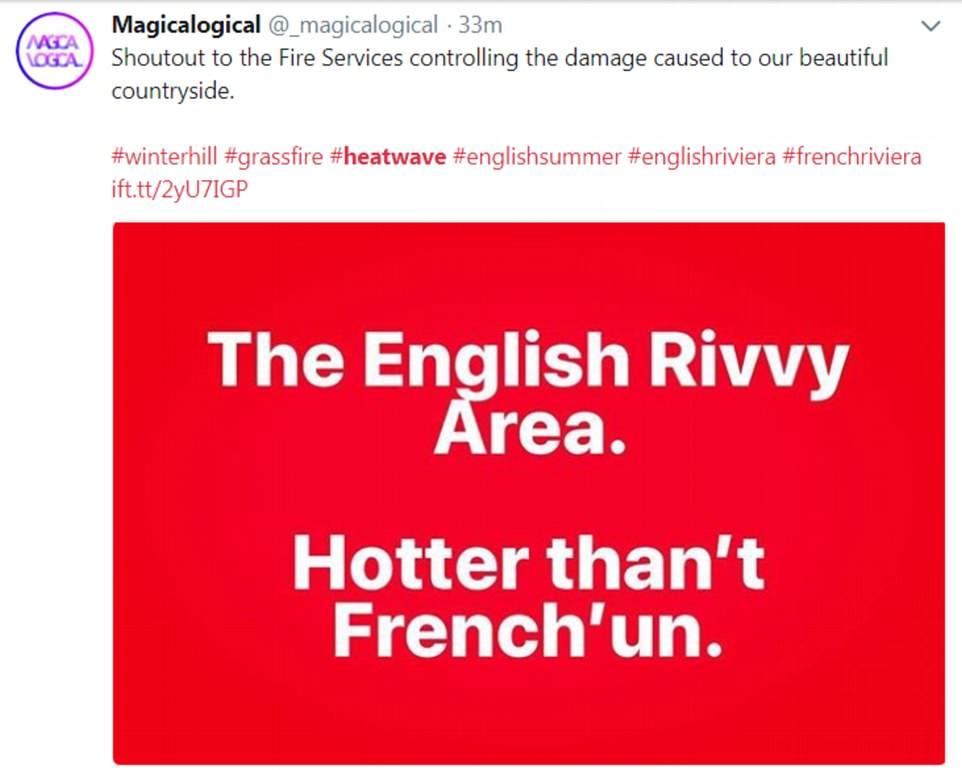 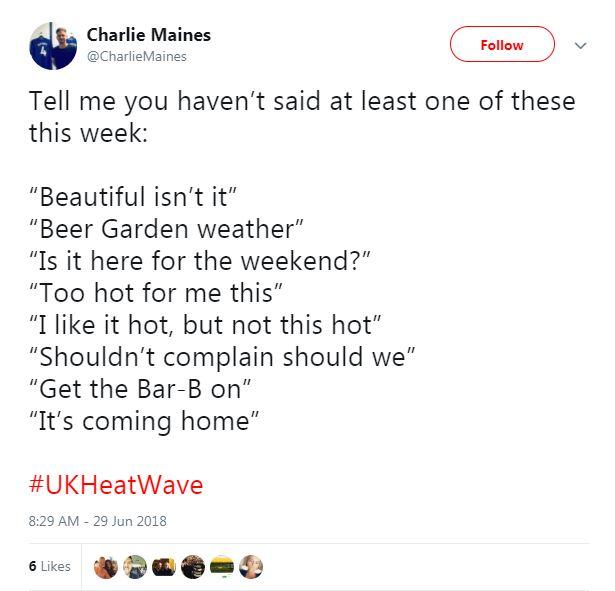 Sharing a message of gratitude to the fire services who are currently battling a blaze at Winter Hill and Saddleworth Moor in the north west, Magicalogical said: "Shoutout to the Fire Services controlling the damage caused to our beautiful countryside."

Marijana Kostelac said: If I'm struggling to fall asleep at night these days, I can no longer extend my sleep in the morning. Why? We're having a heatwave, our windows are facing east and our @Netatmo says it's 28 degrees C (82 F) before 8am… SEND HELP." 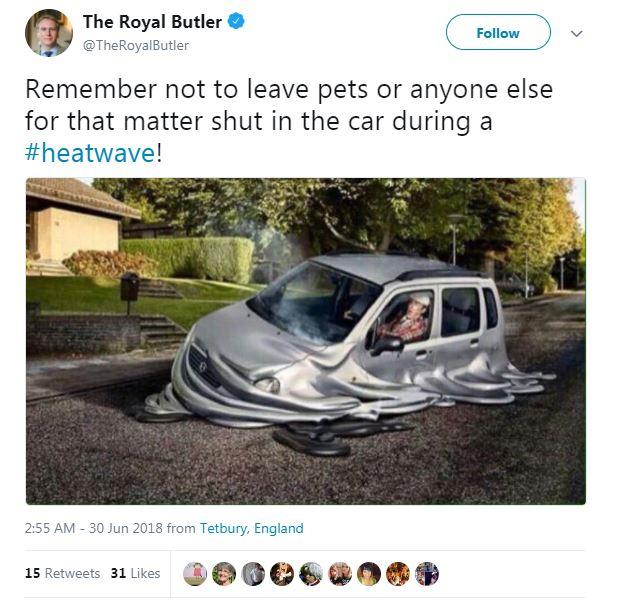 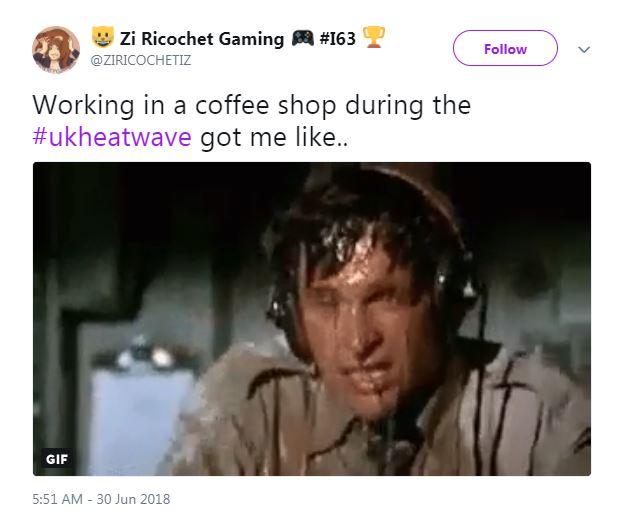 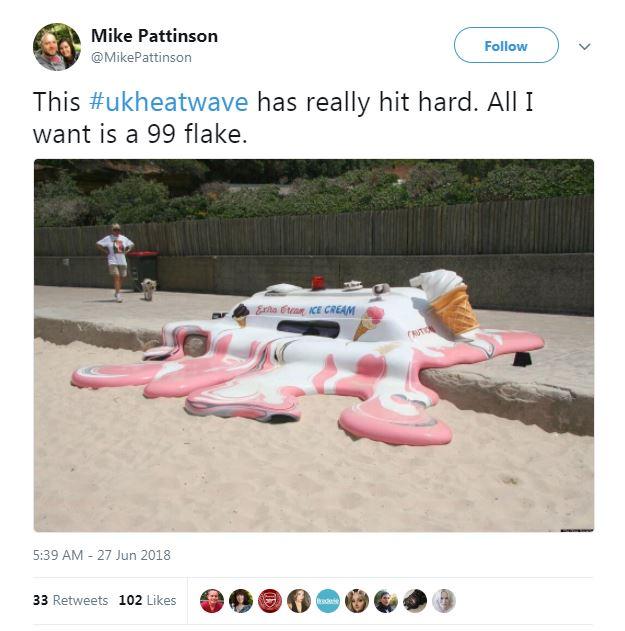 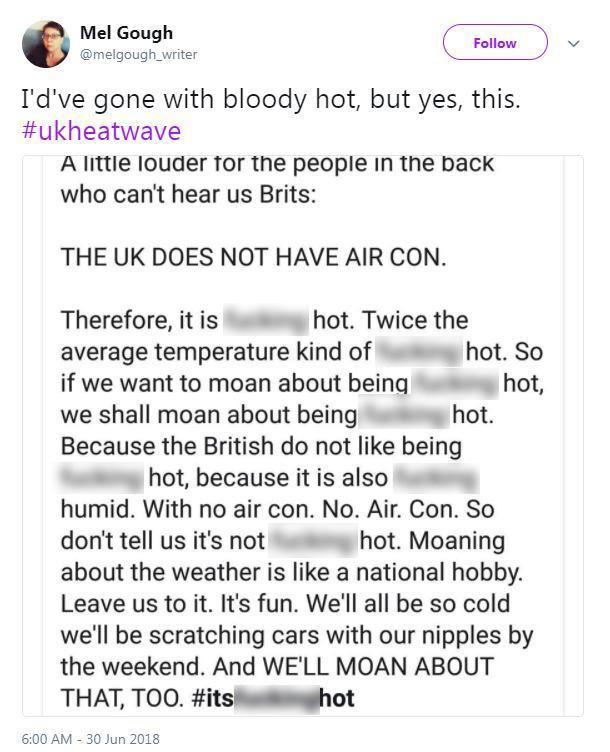 Charlie Maines said: "Tell me you haven't said at least one of these this week: 'Beautiful isn't it', 'Beer garden weather', 'Is it here for the weekend?' 'Too hot for me, this', 'I like it hot, but not this hot', 'Shouldn't complain, should we', 'Get the Bar-B on', 'It's coming home.'"

The Royal Butler shared a picture of a melting car to remind followers to not leave pets in their vehicles, saying: "Remember not to leave pets or anyone else for that matter shut in the car during a heatwave!"

Another user tweeted a meme of a sweating pilot from the movie Airplane, adding: "Working in a coffee shop during the UK heatwave got me like…"

Alongside a photo of a 'melted' ice cream van, Mike Pattinson said: "This UK heatwave has really hit hard. All I want is a 99 flake." 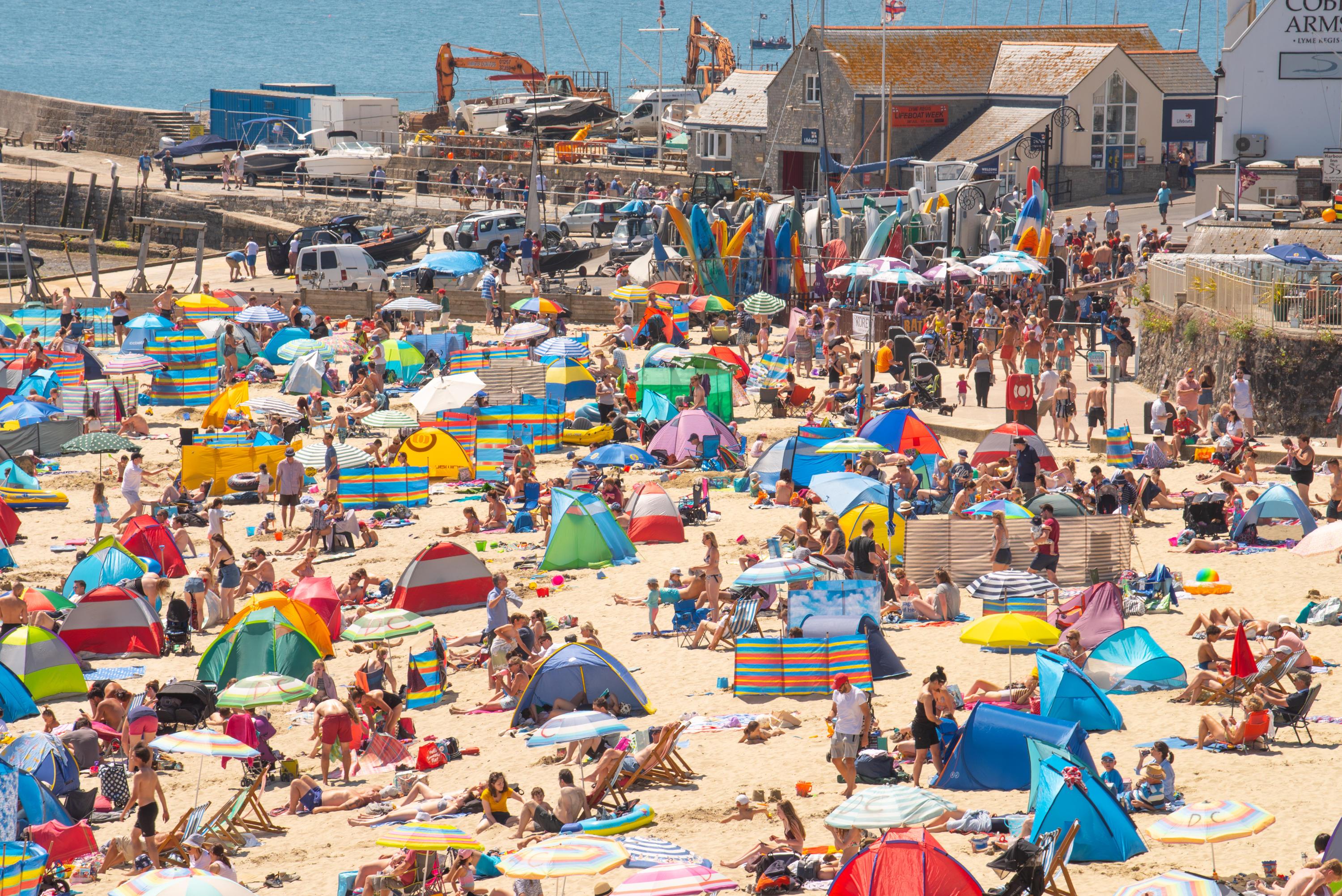 In a posted photo, Mel Gough shared why Britain is feeling the heat this week, which said: "The UK does not have air con. Therefor it is f**king hot. Twice the average temperature kind of f**king hot.

But the sunshine might be coming to an end for some soon though as the Met Office issued an unprecedented warning for thunder, lightning and torrential rain in south Wales and the south west of England.

Up to 40mm of rain in an hour could fall tomorrow after weeks of scorching conditions, they warned, with a high risk of flash flooding.

They said: "The greatest chance of impacts is in the afternoon, with the risk decreasing again on Sunday evening.

"Where surface water flooding or lightning impacts do occur they are likely to be in only a few places rather than across the whole warning area."

This is the first thunderstorm warning since the Met Office brought in two new types of weather warnings – one for thunderstorms, and the other for lightning.