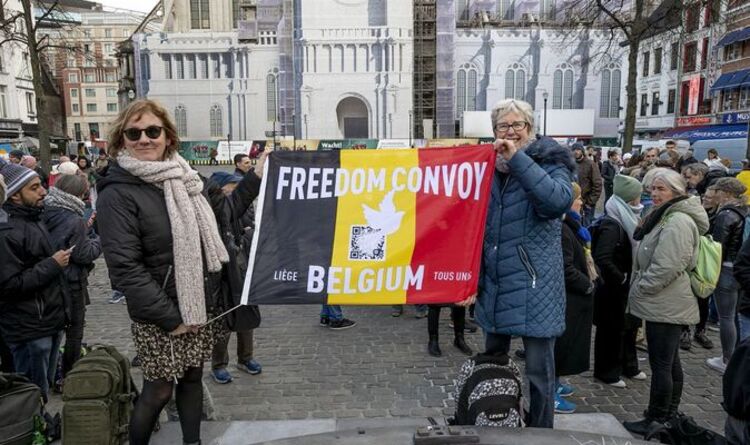 A convoy of 440 trucks and mobile homes were flagged by French police on Sunday as potential protesters headed to Brussels today to protest against coronavirus restrictions. The so-called European freedom convoy took inspiration from anti-coronavirus protesters in Canada, the US and Australia.

Now, the European Parliament has issued a decree on Monday banning all “undeclared demonstrations” by the anti-vaccine pass convoys.

The prefect of the Bas-Rhin, Josiane Chevalier, said that “several convoys seem to have formed to reach Strasbourg” with the “stated aim […] of reaching the European institutions”.

She warned the protesters would be “obstructing road traffic”.

Ms Chevalier added: “My first concern is to protect the parliamentary session, which should be held in good conditions until Thursday evening.”

She went on to say how the convoy around the European institutions are “already under surveillance”.

An offence is punishable by a “4,500 euro fine” with Ms Chevalier noting the police would be able to “fine and arrest offenders”.

She added: “The fact of obstructing or hindering a road open to public traffic is punishable by two years’ imprisonment, a 4,500 euro fine and the immobilisation and impounding of the vehicle used.”

According to the prefecture, the organiser of the banned demonstration “may be punished by six months’ imprisonment and a fine of €7,500”.

Demonstrators from across Europe are expected to join up in Brussels today after separate protests took place across Europe this weekend.

According to Politico, many of the protesters gathered on Sunday near the Belgian border.

A Facebook group associated with French protesters posted on Sunday: “They wanted to bury us, they didn’t know we were seeds. Next step — Brussels.”

The protest is expected to gather near Parc du Cinquantenaire to the west of the city’s EU quarter.

Over the weekend, several protests broke out in France, defying authorities who had banned the demonstrations.

A similar protest also broke out in The Hague, in the Netherlands, with people blocking the entrance to the country’s parliament.

The European freedom convoy is inspired by the ‘Freedom Convoy’ protests that erupted across Canada in late January.

Copycat protests have also taken place in Australia, New Zealand and across the United States.