Bullying sergeant, 32, who served in Afghanistan is caged for six months for punching, swearing and twisting nipples of raw recruits in regiment that guards the royals 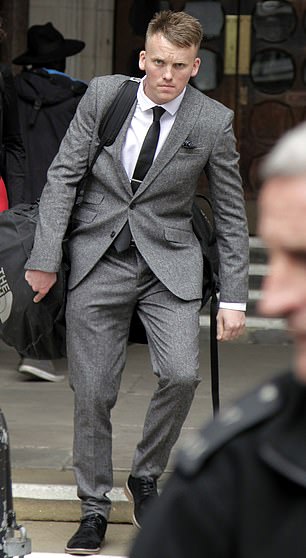 A ‘bullying’ British Army sergeant has been detained for six months for punching, swearing and twisting the nipples of new recruits in a regiment that guards the royal family.

Lance Sergeant Liam Cruise-Taylor, from Shrewsbury in Shropshire, was violent towards seven young recruits in the Irish Guards, part of the household division, which is responsible for ceremonial duties.

The 32-year-old preyed on his victims while drilling them at Catterick Infantry Centre, North Yorkshire, between July 2016 and February 2017.

The thug repeatedly punched young recruits while they were on parade and elbowed one in the chest, telling him to ‘stand up and take it like a man’ when the blow caused him to double over.

He also twisted one soldier’s nipples and slapped another in the face after he said Cruise-Taylor’s name incorrectly.

The veteran soldier, who had a previous exemplary military record, was sentenced to six months’ service detention and demoted to lance corporal after he admitted ill-treating subordinates at a court martial in April this year.

He had served over a decade in the Army, the court heard, and carried out a gruelling combat tour in Afghanistan.

The officer had been singled out as ‘one of the best junior NCO’s in the Irish Guards’ before his disgrace, said Lord Justice Davis.

‘There was a great deal to be said in favour of him, it’s plain that he loved the Army and was determined to do well in his career,’ he added.

But Cruise-Taylor had shown little evidence of remorse or insight, the court heard.

‘Seven victims made accusations of ill treatment in the form of physical violence used against them throughout their training,’ Lord Justice Davis said.

One guardsman recruit told how Cruise-Taylor swore at him and punched him three times in the ribs, said the judge.

‘On another occasion during locker inspection, he was inspecting a guardsman’s locker,’ added Lord Justice Davis.

‘He then elbowed that particular guardsman in the chest, winding him and causing him to bend at the knee, and said: ‘stand up and take it like a man’.’

Another trainee guardsman was slapped across the face during roll call, while one rookie was punched in the belly during inspection after ‘mistakenly misnaming’ Cruise-Taylor.

‘Another recruit was also punched,’ the judge continued. This guardsman was then grabbed by Cruise-Taylor by the nipples, who twisted them.

‘That guardsman said Cruise-Taylor regularly punched him and other recruits in the stomach,’ said the judge, although the blows were ‘not particularly hard’.

‘However, none of the recruits required medical treatment,’ the judge noted.

The judge said Cruise-Taylor had complained that he also suffered ‘bullying and victimisation’ while in the ranks.

A psychiatrist who assessed him said Cruise-Taylor believed that army bullying had triggered a ‘depressive illness’. 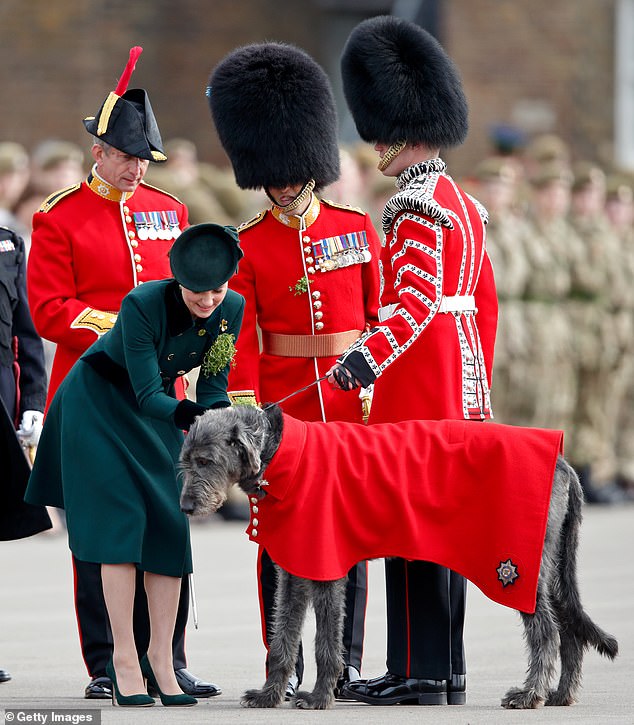 The Duchess of Cambridge presents a shamrock to Irish Wolfhound ‘Domhnall’ (Mascot of the Irish Guards) as she attends the annual St Patrick’s Day Parade in London on March 17, 2017

The soldier’s legal team urged the Appeal Court to substitute a suspended sentence and reinstate him as a lance sergeant.

But Lord Justice Davis, who was sitting with two other judges, refused to interfere with the punishment.

‘It is to be borne in mind that, taken overall, this was a bad case of bullying,’ he said.

‘A number of young recruits were involved while in training, and what happened over a considerable period of time.

‘It cannot be said that what occurred here was isolated offending. Given the circumstances, reduction in rank was almost inevitable.

‘No lance sergeant can possibly behave in the way he behaved – taking advantage of his rank and status with regard to raw recruits.’

Cruise-Taylor has since recovered from his depression and is now rebuilding his military career, the judge added.