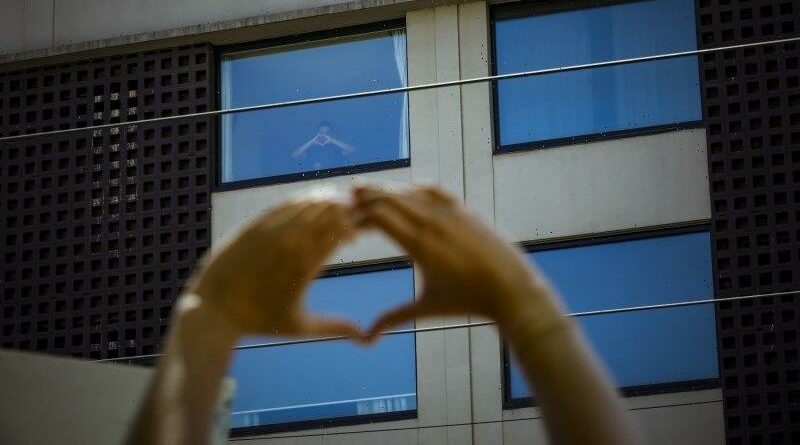 A man who suffered burns to more than half his body after setting himself on fire on Nauru is one of more than a dozen refugees believed to have tested positive to COVID-19 in a Melbourne hotel.

The man’s lawyer, National Justice Project senior solicitor Emma Hearne, said her client had reported that 20 men had tested positive to COVID-19 at the Park Hotel in Carlton, which has been used since last year as a makeshift detention facility. 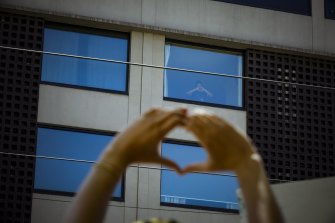 Protestors outside The Park Hotel in Carlton earlier this year.Credit:Chris Hopkins

“We are seriously concerned for our client who has tested positive to COVID-19 with his significant health conditions placing his life at risk,” Ms Hearne said.

“The Australian government owes all those detained a duty of care and needs to take urgent steps to remove them from hotel detention and provide them with urgent medical treatment. We are very worried for our client’s health given how serious the COVID condition can be.”

The first cases emerged on Sunday, when three men were confirmed as positive.

Many of the refugees and asylum seekers detained at the hotel are already medically vulnerable, having been evacuated from up to eight years of detention on Nauru and Manus Island for medical reasons.

One, who The Age has chosen not to name, suffers the effects of self-immolation years after he attempted suicide on Nauru, including the effects of inhalation burns to his lungs. He received his test results on Tuesday, along with others.

Australian Border Force and the Victorian Department of Health had so far refused to confirm how many positive test results were returned to the hotel on Tuesday, where men had been eating and socialising together until the weekend.

The men are now being kept in separate rooms, and positive cases are being quarantined on a separate floor. 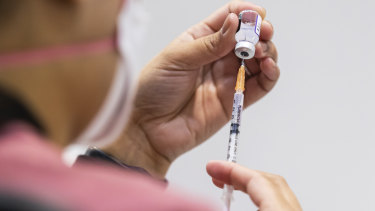 Vaccinations for refugees and asylum seekers is low.Credit:Daniel Pockett/Getty Images

One refugee at the hotel, Azizi, was placed into quarantine on Sunday having been sick for a week.

He said when he told medical staff of his symptoms last week, they offered him Panadol and did not test him for COVID-19.

He said he understood 20 refugees at the Park Hotel had tested positive for the virus as of Tuesday afternoon.

“[Australian Border Force] don’t want to share [the news] and say, ‘there’s lots of people’,” Azizi said. “If you say that, the people say, ‘Why are you keeping refugees in detention, because you’re not looking after them?’”

Asylum Seeker Resource Centre director Jana Favero said advocates had been raising the alarm about the risk of a COVID-19 outbreak since last year.

“The most accurate information we have is that 13 people have now tested positive, but I’d expect that number to rise,” she said.

More than 40 refugees and asylum seekers were tested for COVID-19 on Sunday with confirmed cases expected to rise in coming days.

Australian Border Force said in a statement on Sunday that refugees and asylum seekers had been offered vaccines since August.

But the majority of refugees and asylum seekers held by Australia in detention centres, hotels and other temporary facilities, have not been fully vaccinated.

Advocate Jane Salmon, who is in daily contact with several refugees inside the Park Hotel, said many were vaccine hesitant because they had been “medically abused” offshore for years.

“It’s sort of the Ruby Princess of the Australian Border Force,” she said.

Australian Medical Association vice-president Dr Chris Moy on Monday called on the federal government to intervene in the emerging crisis and allow the men to live in community detention while their bids for resettlement were determined.

“It’s becoming obvious that indefinite detention in hotel rooms is leading to poor mental health and physical health problems, as many Australians, in their relatively short periods of hotel quarantine coming back into this country, have found,” he said.