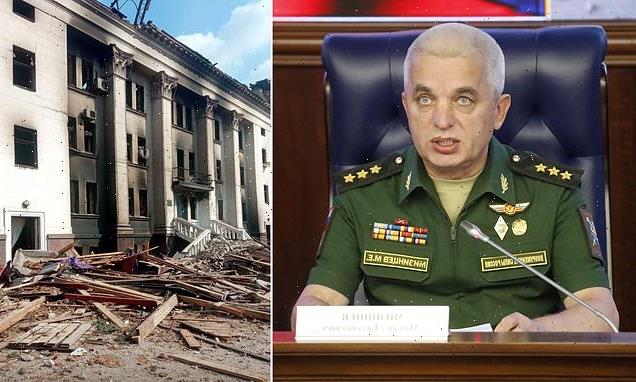 ‘Butcher of Mariupol’ should face war crimes trial for ordering bombing that killed 300 in theatre which had ‘children’ painted outside, attack survivors say

Calls for a Russian general dubbed the ‘butcher of Mariupol’ to face a war crimes trial – after he was accused of ordering the attack on the theatre which killed 300 – come as survivors continue to lay bare the tragedy of the besieged city.

Colonel-General Mikhail Mizintsev, who in a chilling intercepted phone call appeared to be berating a junior officer for not cutting off the ears of a private who had been caught not wearing his uniform properly, is suspected to be behind the horror faced by residents.

Video released for the first time yesterday showed injured civilians covered with dust filing out of the Donetsk Regional Drama Theatre after it was near-totally destroyed in Russian bombs aimed at building on March 16 despite a large inscription saying ‘children’ being clearly visible on the pavement outside. 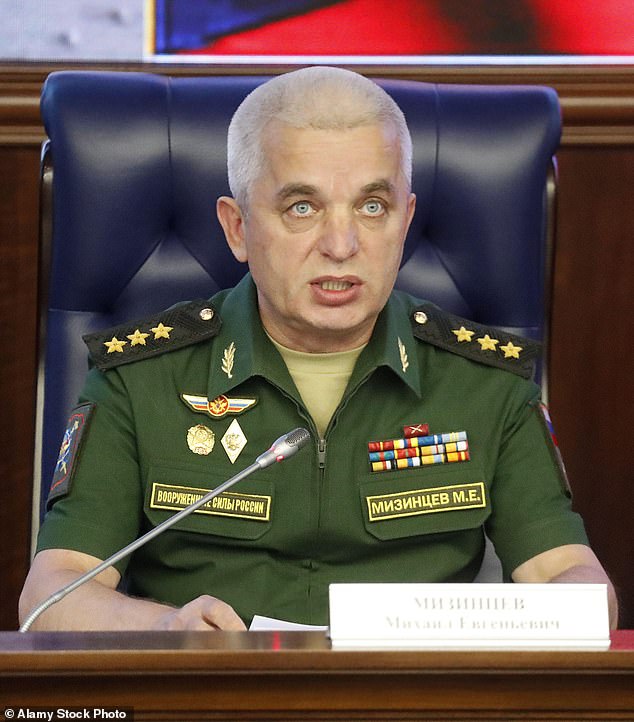 A spokesperson for Mariupol City Hall in a Telegram post said: ‘From eyewitnesses, information appeared that about 300 people died in the Drama Theater of Mariupol as a result of a bombardment by a Russian aircraft.

‘But the words of those who were inside the building at the time of this terrorist act say otherwise.’

Olexander Scherba, Ukraine’s ex-Austrian ambassador, this week branded Mizintsev the ‘Butcher of Mariupol’ while Oleksandra Matviichuk, head of Ukraine’s Centre for Civil Liberties, called on him to face war charges. 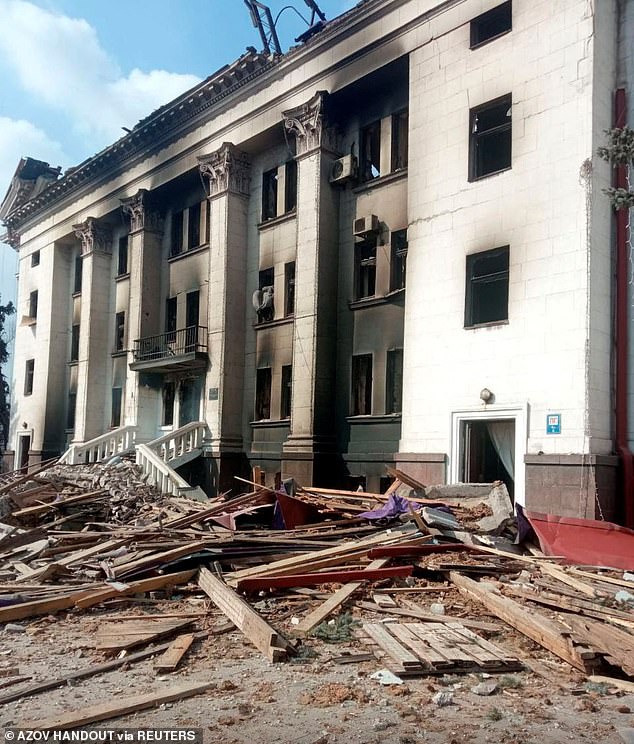 A spokesperson for Mariupol City Hall in a Telegram post said: ‘From eyewitnesses, information appeared that about 300 people died in the Drama Theater of Mariupol’ 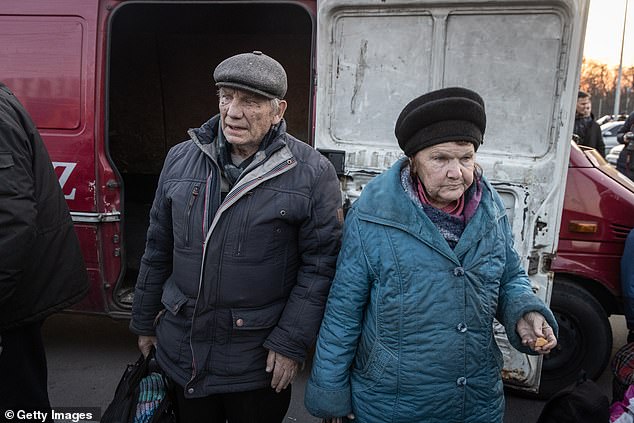 Colonel-General Mikhail Mizintsev: The ‘butcher of Mariupol’ thought to have part in siege of Aleppo

Colonel-General Mikhail Mizintsev has served as the Director of the Russian National Centre for Defence since 2014.

According to The Times, the general was born in Averinskaya, a village northeast of Moscow, in 1962.

He became a Soviet army commander of a platoon in East Germany after studying at the Kiev Higher Combined Arms Command School.

Mizintsev was then sent to the Caucasus as the Soviet Union fells and was back in Moscow by the late 1990s.

In 2003 he became head of operations directorate of the chief of staff.

As he was head of the National Centre for Defence Management by 2015, Mizintsev was also likely to have helped devise Russia’s military strategy in Syria – including the bloody siege of Aleppo, which has chilling parallels with the horror being inflicted in Mariupol.

Ms Matviichuk earlier tweeted a photo of the general, captioned: ‘Remember him. This is Mikhail Mizintsev. He is leading the siege of Mariupol.

‘It was he who ordered the bombing of a children’s hospital, the drama theatre etc. He has huge experience of destroying cities in Syria.

‘We’ll take care of the meeting him in the Hague.’

Mizintsev, who has served as the Director of the Russian National Centre for Defence since 2014, is thought to be in charge of Mariupol’s siege earlier this week when he personally issued a demand for Ukrainian troops defending the port to surrender – which they rejected.

It means Mizintsev likely gave the order to bomb a maternity hospital in the city that killed a heavily pregnant woman and her unborn child; to bomb a theatre sheltering hundreds of children who were likely buried alive in the rubble; and to indiscriminately shell neighbourhoods in attacks that have left corpses rotting in the streets.

Speaking to the BBC earlier this week, Mariia Rodionova, 27, a teacher who had lived in the theatre for 10 days before it was bombed, told the BBC: ‘There was only rubble. For two hours, I couldn’t do anything. I just stayed there. I was in shock.’

Sergey Zozulya, 47, who had his arm blown off before managing to flee Mariupol, called the actions of Russian forces a ‘genocide’.

He told the i: ‘Corpses are lying on the streets because there is nowhere to bury them or dispose of them properly.

‘There was no food, at the time we left we had a piece of bread, three boiled eggs and two boiled potatoes, we left with no food for the children, no nappies, our trousers were wet, those were the conditions.’

Sergey Vaganov, 63, who managed to escape the city with his wife Iryna, told an interview with Al Jazeera that the constant fear of attack meant the pair just ‘waited for death’.

He added: ‘I was thinking – what would we run out of first? Food? Water? Or will a bomb land on us?’

NATO’s deputy-secretary general Mircea Geoana called the war ‘barbaric’ and that ‘according to international conventions, deliberate attacks on civilians are war crimes.’

The US Secretary of State this week accused Russia of war crimes.

Antony Blinken in a statement said: ‘I can announce that, based on information currently available, the US government assesses that members of Russia’s forces have committed war crimes in Ukraine.

‘Our assessment is based on a careful review of available information from public and intelligence sources.

‘The US government will continue to track reports of war crimes and will share information we gather with allies, partners, and international institutions and organizations, as appropriate.

‘We are committed to pursuing accountability using every tool available, including criminal prosecutions.’ 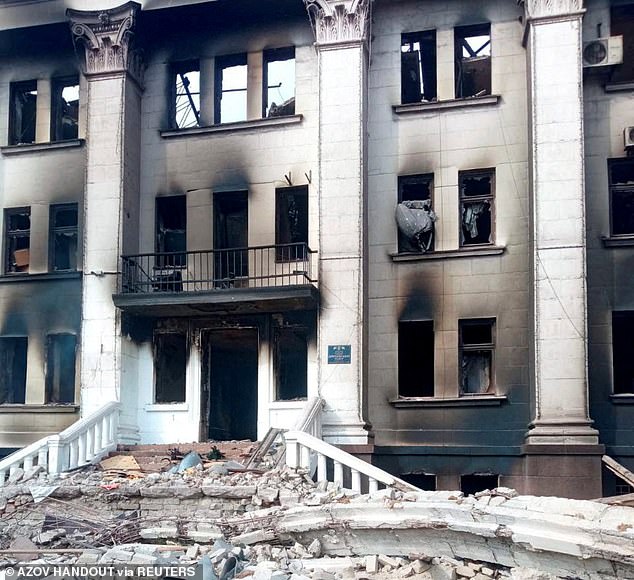 The remains of the drama theatre which was hit by a bomb when hundreds of people were sheltering inside, amid ongoing Russia’s invasion, in Mariupol, Ukraine

Mariupol’s population was more than 400,000 when the siege began almost a month ago, and at least 2,000 civilians have already died in the shelling – though local officials say the true toll could reach 20,000 when final tallies are made.

Hospitals in the city have also been targeted, with a maternity ward struck by Russian bombers on March 9 leaving a mother and her unborn child dead, while wounding other women who were in labour at the time.

Perhaps the worst attack came March 16, when a theatre with bomb shelters underneath it that was housing up to 1,300 civilians was directly hit by a Russian airstrike. 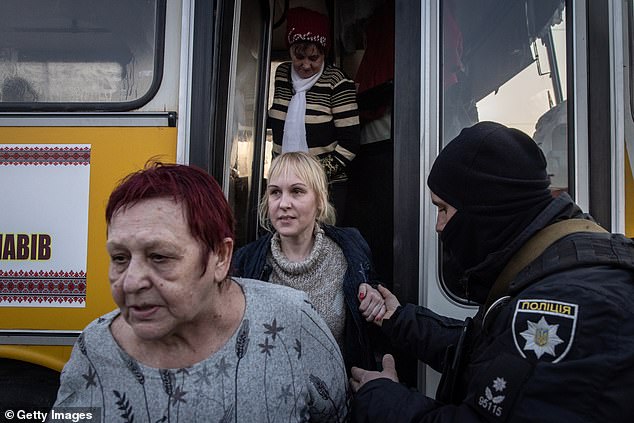 A police officer helps people off a bus after a large convoy of cars and buses arrived at an evacuation point, carrying hundreds of people evacuated from Mariupol and Melitopol 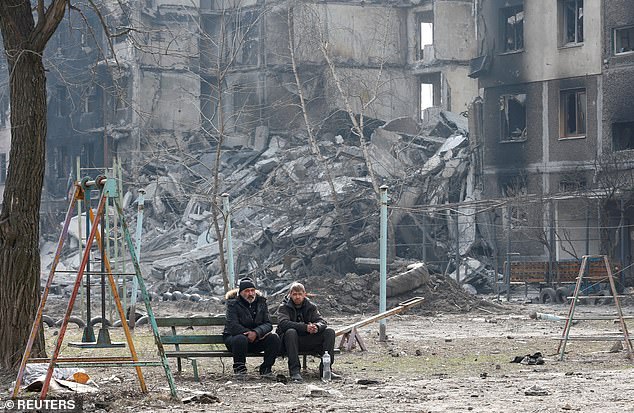 At least 130 people are known to have escaped the wreckage of the building, but it is feared that many others were trapped in the bomb shelters which were covered by rubble.

Around 100,000 people are thought to still be trapped inside Mariupol ‘in inhumane conditions’ and under constant attack, according to President Volodymyr Zelensky when he spoke earlier this week.

Mr Zelensky accused Russian forces of not only blocking a humanitarian convoy trying to take desperately needed aid to Mariupol but seizing what another Ukrainian official said were 15 of the bus drivers and rescue workers on the aid mission, along with their vehicles. He said the Russians had agreed to the route ahead of time.

Footage this week emerged of civilians weaving their way through streets littered with dead bodies and piles of debris as they desperately attempt to escape from the decimated city of Mariupol.