Hundreds of metres of new railway tracks promised by the Andrews government in Melbourne’s north-east will no longer be built in order to save an endangered butterfly species.

The $530 million track duplication on the Hurstbridge line was promised before the 2018 state election. The upgrade would benefit commuters in two marginal, Labor-held seats of Eltham and Yan Yean. 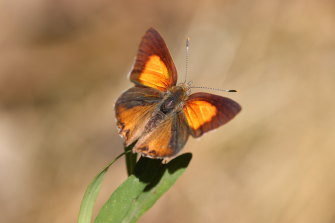 The Eltham copper butterfly is found only at several sites around Eltham and in isolated spots in Castlemaine, Bendigo and Kiata, near Nhill.

The project involved duplicating about three kilometres of a single-track section between Greensborough and east of Montmorency station, and a separate 1.5 kilometre stretch between Diamond Creek and Wattle Glen.

Work started on the project late last year but was paused after a local spotted the endangered Eltham copper butterfly in remnant bushland near Montmorency station in January.

This prompted the Level Crossing Removal Authority to alert the federal Department of Agriculture, Water and the Environment about the discovery.

The state government looked set to face a lengthy environmental approvals process to proceed with the works. Instead, the government ditched a section of its planned duplication that would have cut through the butterfly habitat. 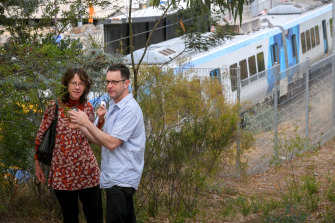 Jane Oldfield and Damian Magner, who spotted the endangered butterfly in remnant bushland near Montmorency station in January.Credit:Eddie Jim

Under the revised plan, 950 metres of the rail line will no longer be duplicated east of Montmorency station on the Eltham side — where the butterfly habitat is located.

Transport Infrastructure Minister Jacinta Allan said the government had to act quickly to ensure it was following federal environmental legislation.

“We’re already hard at work delivering the Hurstbridge line duplication through this growing part of Melbourne and very soon residents will benefit from more frequent and reliable services,” she said.

The Eltham copper butterfly, which is nationally listed as endangered, is found only at several sites around Eltham and in isolated spots in Castlemaine, Bendigo and Kiata, near Nhill. It was considered extinct from the 1950s, until it was rediscovered in Eltham in 1986.

Montmorency resident Damian Magner, who spotted the butterfly in February, said it was great news that it would be spared. But he said had the government carried out proper environmental assessments before starting the project, instead of relying on residents’ intervention, “they wouldn’t have ended up in this awful mess with egg all over their faces.

“It’s appalling that local residents have had to step in and protect this crucial butterfly habitat, when multiple Victorian state and federal government agencies should have been aware of it from the beginning. They never bothered to look.”

The government says the revised design will not reduce the service frequency it originally promised: a train on average every seven minutes from Greensborough and every 10 minutes from Montmorency and Eltham. This is due to additional signalling and power works that will now be rolled out.

Any changes to the cost of the works being carried out by an alliance of Acciona, Coleman Rail, WSP and Metro Trains Melbourne will not be significant, the government says.

Major construction is to start early next year and will be finished in late 2022. The butterfly habitat will be fenced off while the works are under way.

Public Transport Users Association spokesman Daniel Bowen said the government had to ensure no services would be sacrificed. “It certainly does compromise the duplication and they do need to make sure the rest of the project is optimised to reduce train delays,” he said.