Foresthill: Firefighters made progress against a huge Northern California wildfire that was still growing and threatening thousands of mountain homes on Sunday, while crews also battled major blazes that blanketed large swaths of Oregon and Washington in smoke.

The Mosquito Fire in the foothills east of Sacramento spread to nearly 168 square kilometres, with 10 per cent containment, according to the California Department of Forestry and Fire Protection, or Cal Fire. 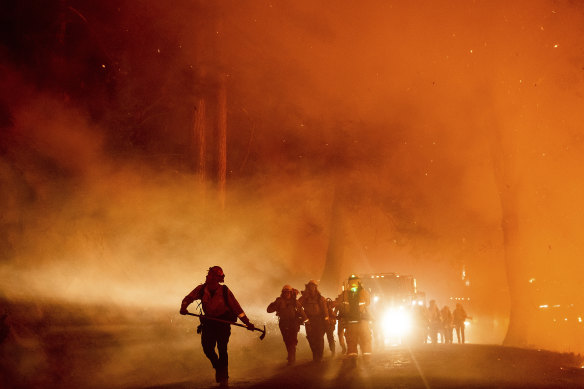 “Cooler temperatures and higher humidity assisted with moderating some fire activity,” but higher winds allowed the flames to push to the north and northeast, according to a Cal Fire incident report on Sunday.

In the last five years, California has experienced the largest and most destructive fires in state history.

Scientists say climate change has made the West warmer and drier over the last three decades and will continue to make weather more extreme and wildfires more frequent and destructive.

The 114-square-kilometre blaze was 45 per cent contained Sunday. The fire has destroyed at least 30 homes and other structures in Riverside County. Two people died while fleeing flames last Monday.

The southern part of California welcomed the cooler weekend weather as a tropical storm veered off the Pacific Coast and faded, helping put an end to blistering temperatures that nearly overwhelmed the state’s electrical grid.

Thunderstorms and the risk of flooding persisted in mountainous areas of greater Los Angeles on Sunday. But after Hurricane Kay made landfall in Mexico last week it quickly was downgraded and weakened further until it largely disappeared, forecasters said.

To the north, remnants of Kay caused flooding Saturday that stranded about 40 vehicles and closed a stretch of State Route 190 in Death Valley National Park. The park was still cleaning up from floods five weeks ago that closed many key roads.

California’s Mosquito Fire has covered a large portion of the Northern Sierra region with smoke. California health officials urged people in affected areas to stay indoors where possible. Organisers of the Tour de Tahoe cancelled the annual 115-km bicycle ride scheduled Sunday around Lake Tahoe because of the heavy smoke from the blaze — more than 80 km away. Last year’s ride was cancelled because of smoke from another big fire south of Tahoe. 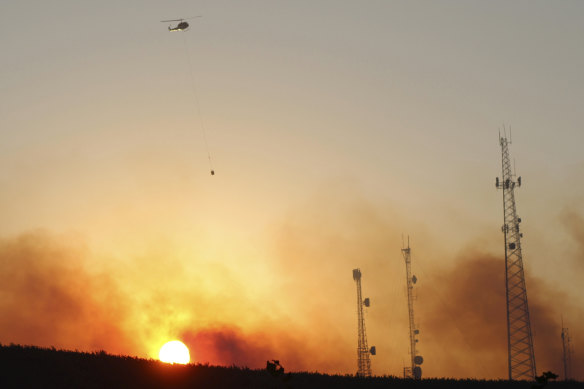 A helicopter carries water on a longline to a wildfire near Salem, Oregon.Credit:AP

The Mosquito Fire’s cause remained under investigation. Pacific Gas & Electric said unspecified “electrical activity” occurred close in time to the report of the fire on Tuesday.

Other areas of the American West haven’t been immune from the fires, either. There were at least 18 large fires burning in Oregon and Washington, leading to evacuations and targeted power outages near Portland as the challenge of dry and windy conditions continued in the region.

Sprawling areas of western Oregon choked by thick smoke from the fires in recent days were expected to see improved air quality on Sunday thanks to a returning onshore flow, Oregon Public Broadcasting reported.

South of Portland, more than 3000 residents were under new evacuation orders because of the 347-square-kilometre Cedar Creek Fire, which has burned for over a month across Lane and Deschutes counties. 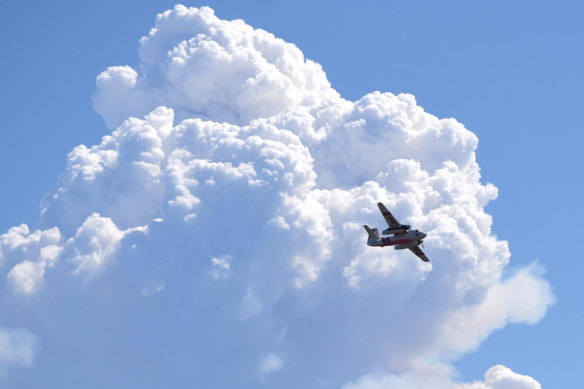 An Air Tanker en route to a California fire.Credit:AP

In Washington state, fire officials were scrambling to secure resources in the battle against a blaze sparked Saturday in the remote Stevens Pass area that sent hikers fleeing and forced evacuations of mountain communities. There was no containment Sunday of the Bolt Creek Fire, which had scorched nearly 12 square miles (31 square kilometres) of forestland about an hour and a half east of Seattle.

“The fire will continue to advance in areas that will be unstaffed. With limited resources, only point protection will be in place while resources continue to mobilise to the fire,” said a Sunday morning incident report.

According to the Northwest Interagency Coordination Centre, this weekend there were more than 1,035 square kilometres of active, uncontained fires and nearly 5000 people on the ground fighting them in the two northwestern states.