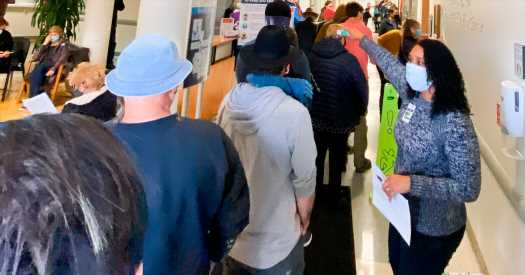 California, confronting its worst surge of coronavirus infections yet, is loosening its vaccine protocol in an effort to avoid wasting Covid-19 vaccines.

If extra vaccines remain or doses are on the verge of expiring, people who work in education, child care, emergency services and food agriculture will also be eligible, the state said.

According to a New York Times database, only 1.3 percent of the state’s population — 528,173 people — has received a shot. California wants to administer vaccines to a million more people over the next 10 days.

The shift in vaccine rules came days after a freezer at a Northern California hospital storing 830 doses of the Moderna vaccine failed, leaving the hospital staff scrambling to use the doses before they expired without violating the protocols.

Around the country, vaccine distribution efforts have proceeded at a trickle.

In Florida, amid concerns about a turbulent rollout, Gov. Ron DeSantis visited two vaccination sites on Thursday to talk to the state’s large population of elderly people about when they would get the coveted vaccines.

Florida had vaccinated nearly 2 percent of its population — just over 400,000 people — as of Thursday.

State officials prioritized health care workers and residents of long term care facilities in their vaccination plan. But the rollout has been bumpy.

On Tuesday, local media reported that older residents had camped out in endless lines at Daytona Stadium to get a shot. The wait was said to be 12 hours or more.

Dr. Nicole M. Iovine, the chief epidemiology officer at the University of Florida Health Shands Hospital, said the high demand was “a good problem to have.” The state’s ability to speed up its distribution will largely depend on how many doses are available, she said.

“Given all the complexities of what’s happening here, I think we’re going in the right direction,” Dr. Iovine said. “Help is coming, the vaccine is coming, and as hard as it is to say, ‘Be patient,’ that’s really the message we have to put out there.”