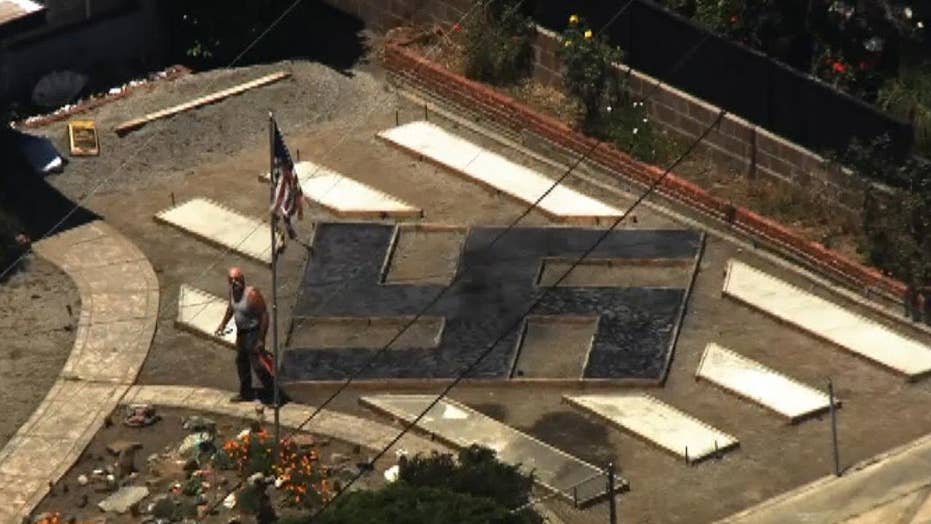 A California man’s new lawn display has triggered complaints from his neighbors due to the symbol's history representing hate, racism and Nazism.

Steve Johnson, a homeowner in the quiet, residential neighborhood in El Sobrante, recently put a giant concrete swastika on his front yard, however, he insists it has nothing to do with Adolf Hitler or the Third Reich.

“It’s a Tibetan symbol. That’s a life symbol,” he told local Fox news affiliate KTVU. “The Tibetan priests used to have that way before Hitler was even thought of.”

He told reporters he added the symbol to match those on his handrail and doorbell.

San Francisco ABC affiliate KGO noted many Eastern religions use what is known as a Swastik, which looks similar to the symbol used by Nazi Germany. However, those symbols generally have left-facing designs, while the one used by Hitler was right-facing and tilted – just like Johnson’s design.

“I own this house, I’ll put what I want. It ain’t none of your guys’ business,” he told KGO. ”I like those signs. Think they look cool. I like them.”

In the 1930s, a luxury German liner called the ‘Bremen’ was an ideal vacation-ready ship, except for the swastika flag flying aboard its bow. But one brave merchant marine devised a plan to cut down the flag and became the first American to take a public stand against Nazi aggression.

However, some neighbors are complaining, saying they are unhappy about it and consider it inappropriate – whether on private property or not.

Renee Schultz, who is Jewish and Johnson’s neighbor, told KGo that she found the symbol offensive.

“Yes! On behalf of Jews that died with that – yes, absolutely!” she said.

Meanwhile, Vince Poehnelt said the display was “stupid” and that it kills the retail value of the home and “everyone on the street.”