Home » World News » CALLAHAN: Kennedy gets Baldwin to give Markle an award? Make it stop! 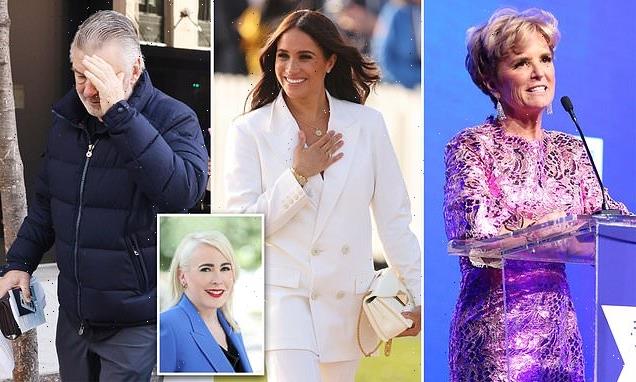 Well, Meghan Markle did once compare herself to Nelson Mandela.

The Duchess of Despair and hapless Prince Harry will be among this year’s recipients of the Robert F. Kennedy Human Rights Ripple of Hope Award, recognizing their work ‘to protect and advance equity, justice, and human rights.’

The award – named for RFK’s iconic ‘Ripple of Hope’ speech delivered in Cape Town, South Africa at the height of apartheid – recognizes ‘moral courage’. The bravery to speak truth to power.

When you hear that, who doesn’t think: Oh right, Harry and Meghan!

‘They went to the oldest institution in UK history and told them what they were doing wrong,’ said RFK Human Rights President Kerry Kennedy, removing all doubt that she has despoiled her late father’s legacy and stripped this honor of any real meaning. ‘That they couldn’t have structural racism within the institution . . . I think they have been heroic in taking this step.’

To Kennedy’s (dubious) point: The Mandela comparison never gets old.

Here was Meghan in New York Magazine’s The Cut last August, telling us that she had gone backstage after a performance of ‘The Lion King’ when a South African cast member ‘looked at me and . . . he said, ‘I just need you to know: When you married into this family, we rejoiced in the streets the same we did when Mandela was freed from prison.’ 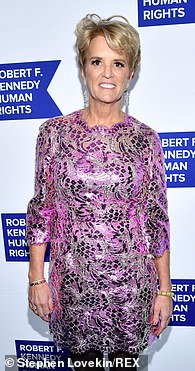 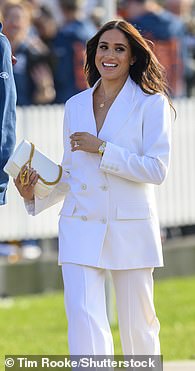 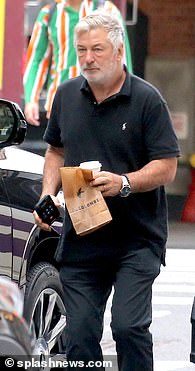 Hosting this year’s event, with tickets starting at $2,500 and going all the way up to $250,000 — basically, the equivalent of a down payment on a nice 6-bedroom house— is none other than Alec Baldwin. (Above, left to right) Kerry Kennedy, Meghan Markle and Alec Baldwin

No one dismissed this whopper better than the great man’s grandson, Zwelivelile Mandela, who told DailyMail.com that ‘Nelson Mandela’s release from jail was the culmination of nearly 350 years of struggle in which generations of our people paid with their lives. It can never be compared to the celebrations of someone’s wedding.’

A wedding paid for with $42.8 million of taxpayer money, Britons lining the streets and cheering, a surfeit of goodwill that Harry and Meghan promptly and grossly tossed aside.

Reportedly Meghan Markle said on her first royal tour, just months later: ‘I can’t believe I’m not getting paid for this.’ So they sauntered out the palace door, hats and grievances in hand, seeking and getting monster paydays from Netflix and Spotify.

As to that claim of racism: Queen Elizabeth II was no racist. In fact, she was such a close friend and admirer of Nelson Mandela that he was among the very few to call her ‘Elizabeth’ — not ‘Her Majesty’ or ‘ma’am’ — and gave her an affectionate nickname: ‘Motlalepula,’ which translates to ‘come with the rain,’ her first visit having taken place during a torrential rainstorm.

King Charles is a vocal admirer of Islam and studied Arabic to better understand the Quran. He’s a critic of Western materialism and outspoken champion of climate action.

Queen Elizabeth and then-Prince Charles fast-tracked the biracial Meghan into the royal family, and Charles himself walked Meghan halfway up the aisle at her wedding.

These are the ‘structural racists’ Meghan and Harry so bravely confronted?

Incredibly, Harry and Meghan will be honored at the RFK gala alongside Ukrainian president Volodymyr Zelensky. Two of these honorees are not like the other, am I right?

And it gets better: Hosting this year’s event, with tickets starting at $2,500 and going all the way up to $250,000 — basically, the equivalent of a down payment on a nice 6-bedroom house— is none other than Alec Baldwin.

Yes, the man who accidentally shot and killed his coworker and has since expressed zero guilt — ‘Someone is responsible,’ he told ABC’s George Stephanopoulos last December, ‘and I can’t say who that is, but I know it’s not me’ — has been tapped to emcee a human rights event. 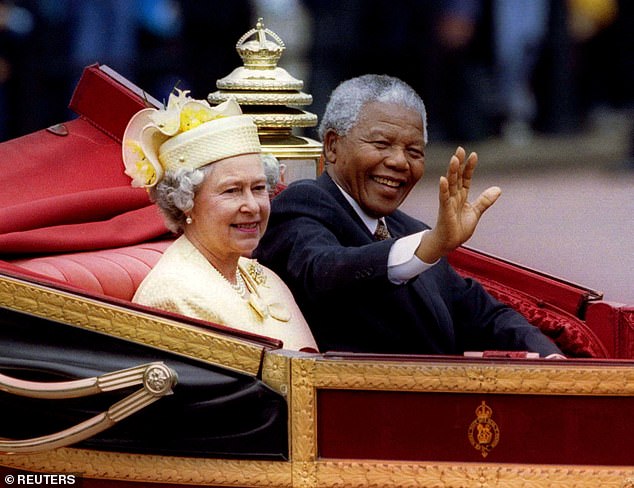 As to that claim of racism: Queen Elizabeth II was no racist. In fact, she was such a close friend and admirer of Nelson Mandela that he was among the very few to call her ‘Elizabeth.’ (Above) Mandela and Queen Elizabeth in July 1996

This is a value system only the ultra-left could abide. It’s an episode of ‘South Park,’ an Onion headline, a Bizarro-world event.

Zelensky aside, it’s more the Olympics of Victimhood than the vanguard of human rights activism.

Yet it’s to be expected from Kerry Kennedy, a woman for whom self-awareness is a foreign concept. She has spent her tenure grinding Robert F. Kennedy Human Rights (terrible name, by the way) into meaningless virtue-signaling. She spends her time chasing after celebrities and high-level donors hardly synonymous with human rights.

To wit: other honorees this December are Frank Baker, head of private equity firm Siris and recent purchaser of a $32 million Palm Beach mansion; Bank of America CEO Brian Moynihan and billionaire Michael Polsky, CEO of renewable energy company Invenergy, which last year sued Worth County, Iowa, in an attempt to force the company’s wind projects on the area.

What any of these titans of industry have done for human rights is beyond me, but we’re supposed to trust Kerry Kennedy here — a leader who, as former employees told me back in 2016, treated her human rights staffers like dirt.

‘For someone who’s a human rights lawyer,’ one told me, ‘I don’t think I’ve ever met someone who cares so little for the people who work for her.’

‘In general,’ said another, ‘she treats everyone as the person who would go get her coffee.’

Well, that’s one thing she and Meghan seem to have in common.

Meghan Markle, who as a newly-crowned duchess on a tour of Africa, bemoaned on camera that ‘not many people have asked me if I’m OK’; whose reported bullying of royal staffers led to resignations — to say nothing of reportedly reducing Kate Middleton to tears, as Tom Bower reported in his book ‘Revenge.’

Meghan also leveled vile, unfounded, unspecific accusations against the royal family as patriarch Prince Philip was on his deathbed and, with her husband, has since claimed endless victimhood from a $14.5 million Montecito mansion while clinging to the very royal titles they say represent the British royal family’s racism, colonialism and elitism — I mean, really, who better? 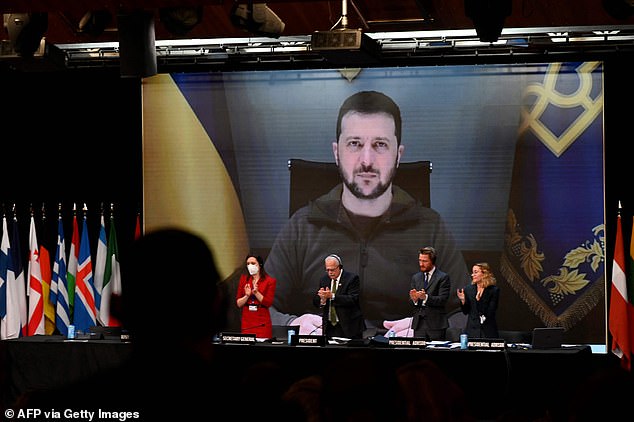 Incredibly, Harry and Meghan will be honored at the RFK gala alongside Ukrainian president Volodymyr Zelensky. Two of these honorees are not like the other, am I right? (Above) Zelensky is seen on screen during NATO session held in Madrid on November 21, 2022

But let’s throw a huge event with an astronomical cost-of-entry-fee to celebrate hypocrites of all stripes, and highlight Harry and Meghan — two people who laud themselves for charitable qualities they don’t seem to possess, who lecture us all on how to live from their multimillion dollar palatial estate, eco-warriors who fly private at every opportunity, who complain publicly about how hard they have it, how misunderstood they are and who insert their frankly picayune grievances into our daily lives.

Volodymyr Zelensky deserves so much better. Elevating Alec Baldwin and Harry and Meghan to his level — insulting and vulgar doesn’t begin to cover it.

If those three are humanitarians, then truly, I ask: What are the criteria?

If you’re Kerry Kennedy, that criteria is upside-down, bonkers, berserk. This is someone who demonized her lifelong best friend and sister-in-law after she committed suicide, in a pathetic defense of her brother. Someone who smashed into a tractor trailer on a New York highway and left the scene, who then did what privileged people like her do best — gripe publicly about what a bum rap she got, how life is so unfair for rich and famous people like herself.

‘[It’s] a terrible policy,’ she told the Today show after her acquittal, ‘ . . . pursuing every case of driving under the influence.’ Yes, pity the reckless driver impaired by substances.

If you’re Kerry Kennedy, you’re using your human rights foundation as a piggy bank to take out a $2.4 million line of credit, traveling for ‘work’ and staying in $500-a-night hotels, using inherited money and fame as some kind of proof that you’re smarter and better than everyone else.