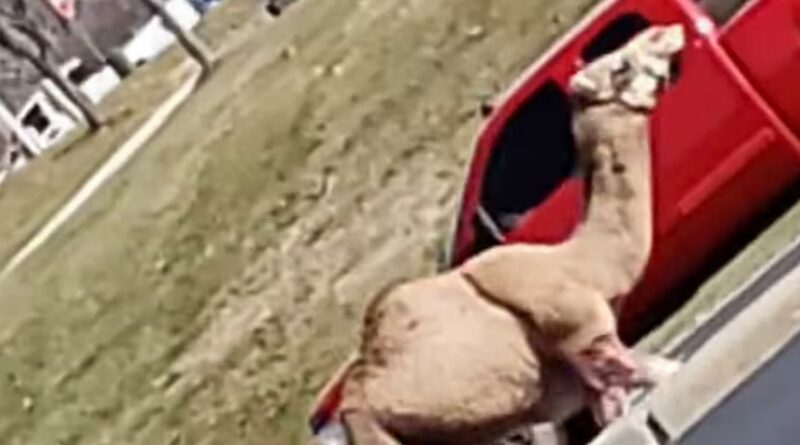 A camel has escaped a Nativity scene and left one of the three wise men without transportation before leading the police on a wild chase throughout the city.

The animal escaped a live drive-thru Nativity scene at the National Agricultural Center and Hall of Fame in Kansas City, Kansas on Sunday, December 5.

It runs laps around the nearby Sunflower Hills golf course before resident Adriana Hale spotted it galloping down a busy road in Bonner Springs.

But it didn't take long before local authorities noticed and sent out an animal control team to track down the runaway camel.

"Look at that camel go! The heck…" a woman can be heard shouting while Adriana is filming the chaotic scene from the opposite side of the road.

A pickup truck and a car tailing a trailer are seen passing by the animal at speed.

According to Bonner Springs Police, the camel took a cheeky stroll throughout the city while the officers pulled out a movie-style stunt chasing the animal on a golf cart.

They gave an update on the police department Facebook page: "Officers and Animal Control spent Sunday chasing a loose camel throughout the city.

"However, we learned camels can run 40mph (64kmph) and it got away. Then it went for a stroll about Kansas-7 highway and into some neighbourhoods. "As what can only be described as a scene from another cop movie, Animal Control Officer Anthony bailed out of her vehicle and went in foot pursuit on Nettleton where it was safely 'taken into custody' by lasso! Why is lassoing not taught in schools?"

Some viewers were concerned that the camel could be stressed and said: "It's sad to see the camel running in distress."

Later the police posted that the camel was reunited with its owners and will go back to "doing camel things".