Want climate news in your inbox? Sign up here for Climate Fwd:, our email newsletter.

GATINEAU, Quebec — Along the coast of the United States, people who lost homes to Hurricane Dorian are preparing to rebuild. But Canada — which has faced devastating flooding of its own — is testing a very different idea of disaster recovery: Forcing people to move.

Unlike the United States, which will repeatedly help pay for people to rebuild in place, Canada has responded to the escalating costs of climate change by limiting aid after disasters, and even telling people to leave their homes. It is an experiment that has exposed a complex mix of relief, anger and loss as entire neighborhoods are removed, house by house.

“Canadians are stubbornly beginning to reconsider the wisdom of building near flood-prone areas,” said Jason Thistlethwaite, a professor of environment and business at the University of Waterloo in Ontario. “It’s taking government action to obligate people to make better decisions.”

The real-world consequences of that philosophy are playing out in Gatineau, a city across the river from Ottawa that has been hit by two 100-year-floods since 2017. Residents here are waiting for officials to tell them if the damage from the latest flood, in April, exceeded 50 percent of the value of those homes. Those who get that notice will be offered some money and told to leave.

In many cases, residents are fine with that.

“I’m very happy,” said Louise David, who just learned that the government will force her to take a buyout. “I don’t want to live this again.”

Canada’s approach offers lessons for the United States, where the quickening tempo and growing force of storms such as Dorian has strained government budgets.

Dorian is the third hurricane to strike North Carolina in four years. Many of the places inundated this time, such as Ocracoke Island in the Outer Banks, had been hit by one of the earlier storms as well, only to rebuild and then flood again.

The cost of that approach is growing. As of last year, the United States had 36,774 houses and other buildings the government describes as “severe repetitive loss properties,” homes that have flooded and repaired at least twice, according to data from the Natural Resources Defense Council. Almost 10,000 of those are in North Carolina; the average such home has been flooded five times.

The Canadian approach is very different.

“What everybody would like is for the problem to not exist. But it does,” said David Foster, spokesman for the Canadian Home Builders’ Association, which supports the steps that officials in Canada are taking. “We expect government will behave maturely, and sometimes that means taking an approach that is difficult but wise.” 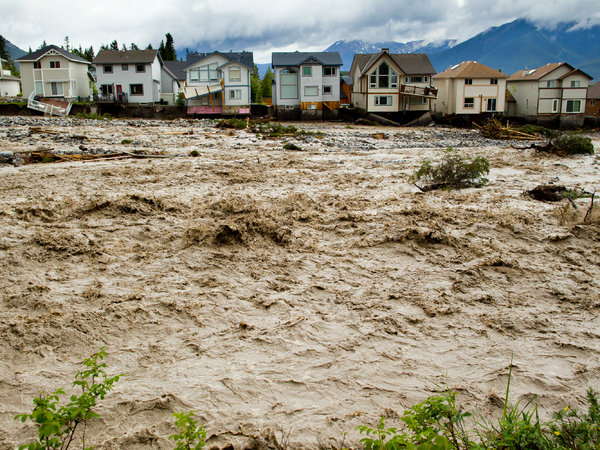 By most accounts, Canada’s experiment began in the summer of 2013, when floods in southern Alberta caused more than 7.5 billion Canadian dollars, or about $5.7 billion, in damage, the most expensive disaster in the country’s history at the time. The toll was particularly great in High River, a town of 14,000 about an hour south of Calgary where floods affected 80 percent of homes.

Rather than pay to rebuild them all, officials issued mandatory buyouts for two particularly exposed neighborhoods.

Not all residents were on board. “Those were some of the worst meetings I’ve ever been involved in, telling people they’ve got to leave their homes,” said Craig Snodgrass, High River’s mayor, who supported the buyouts.

Still, the homes came down.

Mr. Snodgrass says that the city as a whole is now better protected. “You’ve got to make the decision for the greater good of the community,” he said. “This is going to happen again. The water is coming, folks.”

That philosophy spread. In 2015, Canada made it harder for lower levels of government to get federal money after disasters. The next year, British Columbia said flood victims who had chosen not to buy private flood insurance would be ineligible for government aid.

This year the federal government went further still, warning that homeowners nationwide would eventually be on their own. If people deliberately rebuild in danger zones, at some point “they are going to have to assume their own responsibility for the cost burden,” Public Security Minister Ralph Goodale told reporters in April. “You can’t repeatedly go back to the taxpayer and say, ‘Oh, it happened again.’”

No part of the country has been more aggressive than Quebec. Since 2005, the province, Canada’s largest in area, has prohibited building new homes, or rebuilding flood-damaged ones, in the 20-year floodplain — areas with a particularly high risk of inundation.

But after major floods hit Gatineau and other parts of Quebec again this April, the government expanded the no-building zone to include any area inundated in 2017 or 2019. Within the enlarged “special intervention zone,” homes damaged by 50 percent or more of their value must now be abandoned.

Quebec also limited disaster aid, and not just inside the special zone. After this spring’s flooding, the province said it would set an upper threshold for assistance at $100,000 over the lifetime of the house.

After that, homeowners face a choice: They can sell to the government, which will pay no more than $250,000, regardless of market value. Or they can get money to rebuild one last time — but in doing so, they forfeit any future financial assistance.

Maxime Robert, a civil security adviser to the Quebec public security minister, Geneviève Guilbault, said the payouts were capped out of a sense of fairness to taxpayers, particularly since an average taxpayer might not be able to afford a waterfront home in the first place.

“Is it fair to have that person’s taxes used to buy a half-million-dollar house?” Mr. Robert said.

In forcing people off their property, Canada’s policymakers have an advantage over the United States. Canada’s constitution contains no explicit protection for private property like that in the United States, according to Jim Phillips, a professor at the University of Toronto Faculty of Law. While the government is unlikely to seize someone’s home without compensation, it faces fewer constraints.

The American approach “is much more generous to the property owner,” Dr. Phillips said. For example, a couple in New Jersey were awarded $330,000 this year after the government built protective dunes on beachfront property after Hurricane Sandy, on the grounds that those dunes hurt their ocean view.

This collision between the individual and collective good, between what’s fair and what’s safe, is playing out in Gatineau. In Pointe-Gatineau, a low-lying neighborhood where the Ottawa and Gatineau rivers meet, the 2017 floods caused entire clusters of homes to be demolished, leaving scattered houses surrounded by grass lots.

Then, this spring, as homes were still being torn down from 2017, the neighborhood flooded again. Myriam Nadeau, the local councilor, said the government had an obligation to help people leave. But that doesn’t have to mean the end of the community.

“There’s a memory to honor here,” Ms. Nadeau said one afternoon in July, sitting at a riverside patio on a patch of land that was underwater a few months earlier. “I know it will never be what it was before. But it can still be something good.”

Afterward, Ms. Nadeau visited some of her constituents in Pointe-Gatineau, gauging their progress like a doctor doing her rounds. Residents here seem to fall loosely into two groups: Those who don’t want to leave, and those who want nothing more than to go.

Ms. Nadeau’s first stop was Benoît Charron, who in 2016 bought a house overlooking the water, hoping to turn it into a brew pub. When the 2017 floods destroyed the house, Mr. Charron refused a government buyout, which wouldn’t have covered his mortgage. Instead he rebuilt, going deeper into debt.

Mr. Charron’s gamble has paid off so far. The new building survived subsequent floods, and he hopes to open his pub this year. Asked whether he’s worried about his potential customers moving away, he shook his head. “People will always want to live close to the water.”

One of those people is Raymond Bigras, who is 81 and lives two doors down from the house where he was born. His home flooded in 2017 and again in 2019. He said he won’t move, and even said the empty lots nearby offered a certain benefit.

“Ever since they took the houses down, I have a view of everywhere,” Mr. Bigras said.

Not everyone agrees. A few blocks away, Benoît Guérette was still working on his house, which he decided to elevate after 2017 rather than sell to the government. The building now towers over its neighbors. But Mr. Guérette said this year’s floods convinced him that he had made a mistake staying.

“Look at the area, it looks like a bomb dropped,” he shouted through the window of his unfinished second floor. “I should have taken the buyout the first time.”

Gatineau’s mayor, Maxime Pedneaud-Jobin, must now navigate a landscape that is emotionally and financially precarious: Helping people who want to leave, working with those who refuse to go, and trying to prepare his city for a future that might look very different from its past.

The best solution, Mr. Pedneaud-Jobin said, is to determine which parts of the city can be protected from flooding, then build the infrastructure necessary. The homes that can’t be protected, he added, should be purchased at market value. But those buyouts should be mandatory.

“We have to go all the way,” Mr. Pedneaud-Jobin said. “If you ask people to leave, you pay the money that needs to be paid. And you force them to leave.”

Christopher Flavelle covers climate adaptation, focusing on how people, governments and businesses respond to the effects of global warming. @cflav

How to get FREE McDonald’s fries tomorrow