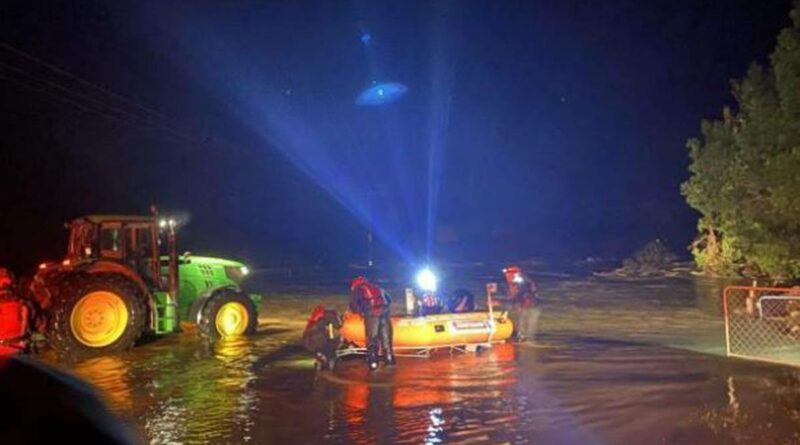 Johnny Miller was stuck up a tree with raging floodwaters beneath him.

The 54-year-old Hororata plasterer had phoned his friend after abandoning his vehicle. In the pitch-black darkness, heavy rain soaked through his jacket and he started to feel cold. His phone was about to go dead, but before it did, he got the text he was hoping for – help was on its way.

It was the start of a four-hour battle for survival, which ended with Miller being swept downstream and clinging to a branch before being winched to safety.

The interior plasterer and racehorse trainer was among those saved in several dramatic air rescues during the Canterbury floods.

He had been driving to Darfield from his home and had almost reached the town when his car suddenly hit raging waters about 7pm.

Miller said he had not expected the Hawkins River on Greendale Rd to have risen like it did. The river is usually dry, but runs across the road when it is flowing. Miller said he had driven across it just a couple of hours earlier, when the river was just a “trickle” and the road had been “as good as gold”.

“I went out in the dark, it was my fault, the road wasn’t closed, before I knew it, I hit it.”

His Ford Ranger floated downstream. He undid his seatbelt and picked up his cellphone. He pressed the number at the top of the recently-phoned list on the screen, which was for his friend Ricky Chapman.

He decided to climb out the driver-side window, and zipped his cellphone into his jacket pocket. On the first couple of tries the automatic button to wind the window down didn’t work.

Remaining calm, he climbed on to the roof and was there for a couple of minutes as the Ranger was swept downstream about 50m, where Miller grabbed onto a tree. He was surrounded by pitch blackness as he stood on a large branch of the tree, above the raging waters below. He phoned Chapman again.

He did not want to cause a fuss by phoning emergency services, and thought he would probably be alright up the tree for the night. Chapman disagreed and said he would phone 111.

Chapman soon texted him back to say he had called 111. After that Miller’s phone stopped working.

While he had been reasonably dry when he got to the tree, Miller soon became cold and wet from the heavy rain.

After he had been there about 45 minutes, Darfield fire crews arrived, found where he was by calling out and shone torches in the area.

Later a farmer, Rod May from Darfield, shone lights from his tractor on to the tree, while a swift water rescue crew unsuccessfully tried to reach Miller with boats. An Air Force helicopter was next on the scene. The helicopter winchman was lowered down. However, Miller was in an awkward position in the tree and the winchman could not reach him. The helicopter flew away.

By this time Miller had had to climb higher up the tree as the water had risen. The ordeal was now stretching into hours. It was nearing 11pm and he was getting “bloody cold”. However, he said he had never felt desperate or thought he was not going to make it out.

“I was calm, but I was cold. To be fair, I wasn’t worried. The whole time I was out there I felt calm.”

He started to think that maybe he could get to the bank of the river, near where the emergency services were, about 40m away. He believed either the rescuers would throw him a rope, or he would be able to grab on to another tree.

“I thought – I will go like hell, and I will get out on the right side where those torches are,” Miller said.

“I felt I had got myself in that position, I felt I had to try and get myself out of it.”

He took off his jacket, keeping on his T-shirt, shorts and work boots, and dived into the river.

“I felt warmer in the water than in the tree.”

The river sucked him down under branches at one point, but the force of the river pushed him through the debris. He tried to grab at trees along the way, and after being swept about 300m managed to hold on to the branch of a tree.

He had been in the water about 15 minutes when the winchman was this time able to reach him and lift him from the water. He had a “windy” ride at the end of the rope dangling under the helicopter, as it moved to a nearby paddock and hovered over it for some time to get in the right position to lower him down. However, at that time he wasn’t feeling the cold.

“What happens is your adrenalin kicks in, that’s why, but then when I got to the ground, then I was cold, and they put me in the stretcher,” Miller said.

In the ambulance, paramedics told him his body temperature was low. He was taken to Christchurch Hospital, where he stayed the night and was treated for hypothermia.

Miller said he had learned a lesson from the ordeal, about just how quickly floodwaters can rise and to never know what is around the corner in such conditions.

“Don’t expect every road that’s not got a sign up to be foolproof.”

Miller said he had great respect for his rescuers, who were “gutsy”.

“You don’t want them putting their lives out there, you know, but they do.”

His rescuers told the Star how they were stunned at Miller’s survival.

May, who had earlier brought the tractor to the scene, and his family watched as Miller dived into the river.

“We were horrified, we thought that’s it, he’s gone,” May said.

“When he went into the river, we really thought that possibly it was the end for the poor bugger,” Chambers said.

Miller bought a new cellphone last week, and had plans to retrieve his jacket and the phone that saved his life from the tree once floodwaters subsided. He also planned to retrieve his car, which he had since spotted downstream on its side.