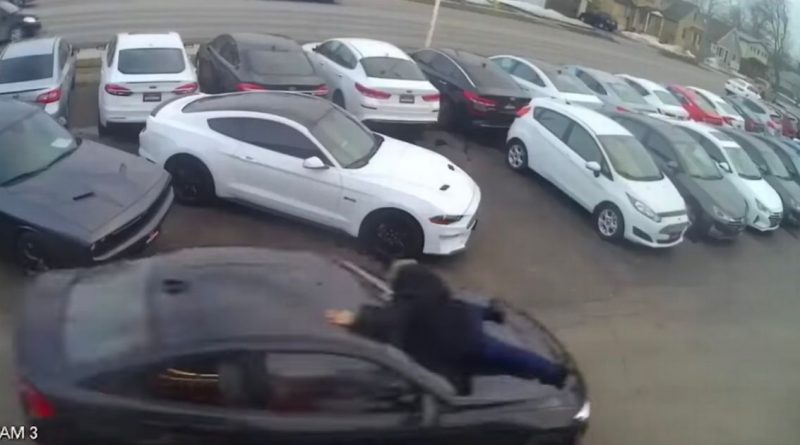 This is the shocking moment a salesman hangs on for dear life to a car hood in a desperate bid to stop a thief from driving off in a BMW.

Moe Al-Kaissy, 23, was showing a 2018 BMW to a man who asked to hear the engine while sitting in the driver’s seat at Sport Motors Auto Sales in the city of London in Canada's Ontario province.

The potential customer then asked to make a phone call inside the car and Moe stepped outside the two-door M4.

CCTV outside the dealership captures the man, dressed in a dark-coloured suit, talking to Moe before they both get in the car.

But soon as Moe turns on the engine using a remote car key, the man speeds off in the BMW, knocking him onto the hood.

The car salesman holds onto the windshield as the thief swerves left and right while travelling over half a mile down Oxford Street.

He fell off onto the road and was nearly hit by a silver Audi when the car slowed down to turn into a road, according to CBC News.

Moe was left with an injured knee and bloodied toes after his feet were dragged alongside the vehicle.

His brother, Mustafa, who watched the terrifying ordeal unfold, told London Free Press: "He [The thief] kept swerving the car, left and right, trying to get him off.

"He was trying to look around (Moe) to see where he’s going. How is that possible? It’s a human on the hood."

London police on Monday also released images of the suspect, the silver Audi and video of the incident.

"If anyone has dashcam video or any information from this incident, please contact us."