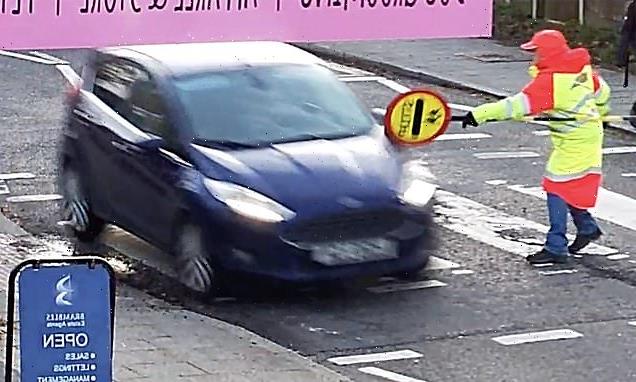 This is the shocking moment a car smashes into a lollipop lady’s stick as she helps schoolchildren cross the road.

The incident took place on Friday afternoon seconds before three pupils walked over a zebra crossing.

CCTV footage shows a blue hatchback knocking the lollipop lady’s pole as it drives through the crossing in Bursledon, Hampshire, ignoring her plea to stop.

Police have now launched an investigation after revealing the impact left the unnamed woman with injuries to her wrist. 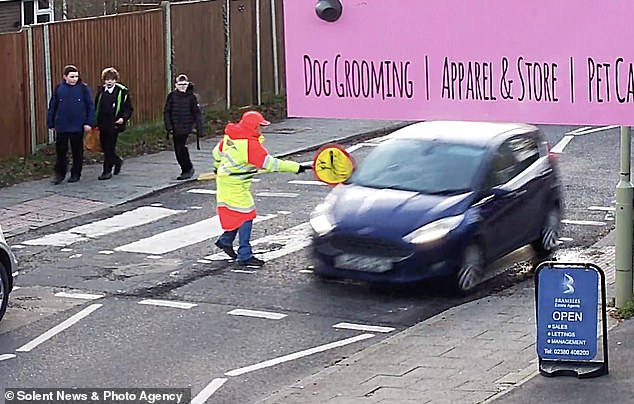 The blue hatchback is pictured motoring through the zebra crossing in Bursledon, Hampshire, smashing into the lollipop lady’s pole, leaving her with injuries to her wrist

The incident happened at the same spot where pedestrian Jackie Carrington was struck by two vehicles in a double hit-and-run last month which left her with a fractured wrist.

The CCTV of the latest incident was recorded by Richard Habgood, who owns a property in the area.

The 61-year-old private hire driver says he has a ‘camera trained on the crossing’ and has set up a Facebook group to share clips of near-misses.

The father-of-four said:  ‘The patrol ladies are actually taught to push their pole out in front of them because if something’s going to get hit, it’s better that they hit the lollipop rather than the person.

‘And you can see her do that in the instance. She walks onto the crossing, one car stops, the other car makes a dash for it and as you could see, it’s the pole [that gets hit].’

He claimed lollipop ladies at the crossing were dealing with ‘terrible’ driving ‘almost on a daily basis’. 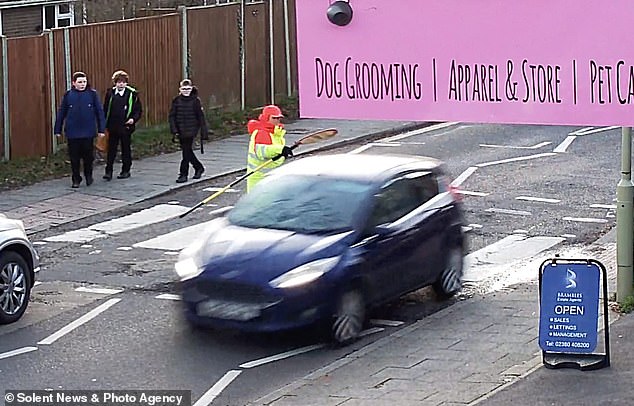 The car drives through the pedestrian crossing after failing to stop for the lollipop lady, as three children watch on in disbelief

He added: ‘It’s just terrible. [There’s] no regard or no understanding of the actual law.

‘Once you’ve got a foot on the crossing, you’re supposed to stop. You’re not supposed to put your foot down and swerve round people.

‘I was surprised that the driver didn’t see that. There was a hi-viz person with a stop sign on the crossing.

‘How can you not see that? The car one way did and car the other way clearly didn’t.’

Appealing for information, a spokesman for Hampshire police said: ‘It is alleged that a woman – conducting a lollipop patrol – stepped out onto a zebra crossing to stop traffic to allow for children to cross the road safely.

‘As she crossed the road, it is reported that a vehicle approached at speed – failing to stop – and struck her lollipop stick; resulting in causing minor injuries to the woman’s wrist.’

Police added they are still hunting for witnesses to double hit-and-run at the zebra crossing on December 15.