Home » World News » ‘Carpooling to the moon’: NASA to outsource its next lunar experiment

Washington: NASA's next lunar science experiments will arrive at the moon via a spacecraft built by one of nine private companies – a first for one of the agency's science missions.

The space agency has named the organisations that are now eligible to bid on delivering science and technology payloads to the lunar surface. They include some longtime players in the aerospace industry, like Lockheed Martin, but are mostly newer names with startup cultures, like Pittsburgh-based Astrobotic and Masten Space Systems in Mojave, California. 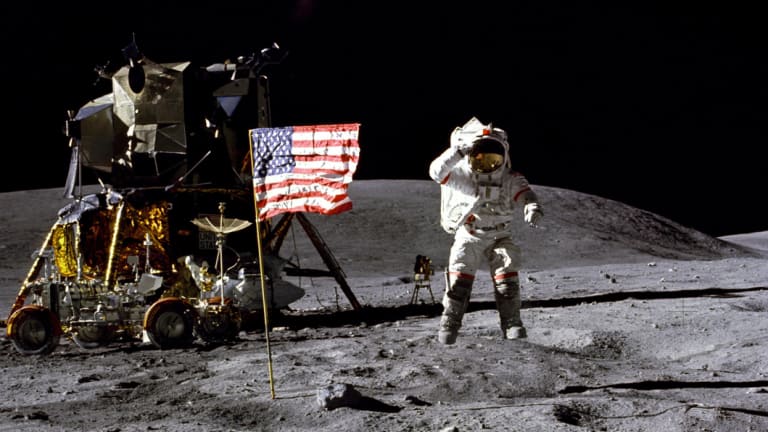 John Young salutes the US flag at the Descartes landing site on the moon during the first Apollo 16 landing in 1972.Credit:NASA

The Commercial Lunar Payload Services program is a priority of NASA Administrator Jim Bridenstine, who said in May that leveraging commercial capabilities would allow for more frequent and affordable access to the lunar surface. "More missions, more science," a news release about the CLPS program promised.

It also continues a trend at NASA toward public-private partnerships for exploration. Under president George W. Bush, companies were awarded contracts to fly cargo to the International Space Station. The Commercial Crew Program, developed under Barack Obama, will pay companies to transport human crews.

The CLPS missions would be the agency's first such partnership in deep space. The first could fly as early as next year, and NASA hopes to send two payloads every year for the next ten years. It's not yet clear what kind of instruments NASA hopes to send, though the first call for proposals should come out in the coming weeks or months.

Most of the companies involved have never flown a spacecraft of this complexity and scale, and Bridenstine acknowledged that some of the CLPS missions will likely fail to achieve a "soft" landing on the lunar surface.

"This is a venture capital kind of effort," he told reporters. "At the end of the day the risk is high, but the return is also very high for a low investment."

The relatively small and inexpensive payloads delivered via the CLPS program would be followed by more traditional medium- and large-class missions, Bridenstine said, including an eventual crewed mission to the moon.

US President Donald Trump has named sending American astronauts to the moon as a goal for his administration. His Space Policy Directive 1, signed last December, directs NASA to collaborate with the private sector in returning to the moon en route to a longer-term mission to Mars.

But no US spacecraft has touched down on the moon since the last Apollo mission in 1972, and it's been exactly 50 years since NASA last sent a robotic mission to the lunar surface. Earlier this year, NASA shocked scientists by cancelling the Resource Prospector mission, the only American lunar rover currently in development.

Still, Earth's only natural satellite is being explored by other nations; China's Chang'e 4 and 5 missions, which would deliver a rover to the moon, and return rock samples from the surface, is slated to launch next year. India and Israel also plan to launch lunar landers next year.

Notre Dame lunar geologist Clive Neal, who is emeritus chairman of the independent Lunar Exploration Analysis Group, was cautiously optimistic about the prospects for science under the CLPS program. Many moon researchers were disappointed by the cancellation of the Resource Prospector mission – "I still am," Neal said.

But he was cheered by the possibility that partnerships with the aerospace industry might make the moon more accessible. Zurbuchen said Thursday that a mobile lunar laboratory remains one of NASA's goals for moon exploration, though such a mission would likely be developed through a more traditional process.

He also said NASA hopes to be just one of several customers providing payloads for these commercial missions. Carpooling to the moon – perhaps with academics or another company – should reduce the cost, he said.

The CLPS announcement comes as NASA conducts safety reviews of two of its major private partners, SpaceX and Boeing. Both companies have been contracted to fly astronauts to the International Space Station but have suffered setbacks and delays as their work to develop their spacecraft. SpaceX in particular has drawn scrutiny after founder Elon Musk took a hit of marijuana and drank whiskey on a podcast. Neither company is among those selected for CLPS eligibility.