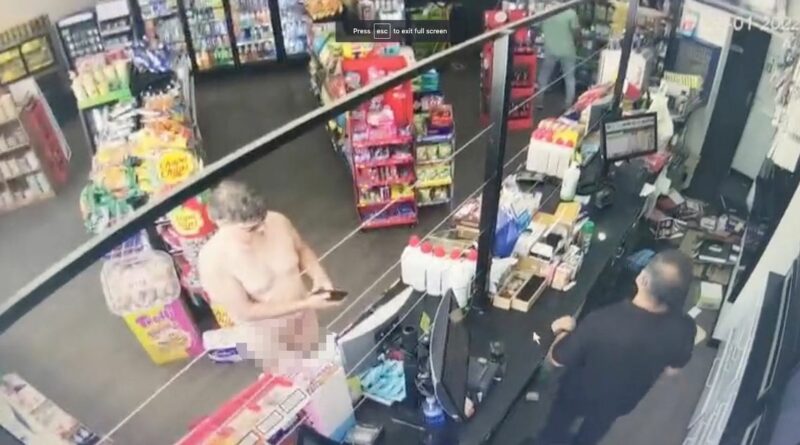 A petrol station worker was stunned when a customer walked into shop completely naked to pay for his fuel.

The bizarre incident happened at a BP station in Edgecliff, a suburb of Sydney on Thursday, January 27, but it went viral when the CCTV footage was shared on Twitter.

Posted by Bruno Bouchet, manager of radio host Kyle Sandilands in the Kyle and Jackie O Show, the clip shows the white-haired customer walking into the shop wearing nothing but a pair of flip flops and sunglasses.

He heads to the counter and opens his e-wallet on his phone before he casually taps on the machine to pay.

The shop keeper looks away to avoid eye contact and walks back to the till when the naked man turns around and exits the shop.

Bruno wrote in his post on Saturday (January 31): "Real life version of that dream you have when you’re completely starkers in public."

The video sent shockwaves around the internet as some viewers tried to solve the mystery behind the nude scene.

"Did he take a wrong turn from the nudist beach?" one wondered while a second wrote: "Dude is out there living his best life."

Others were more concerned that the man was not seen wearing a face mask while entering the shop.

A viewer commented: "He'd better be wearing a face mask."

Bruno told the Daily Mail that the worker at the gas station was also worried by the fact that the man was not following the guidelines on coronavirus.

He said: "He thought it was crazy like anyone else. But there was no conversation about what was happening.

"He was concerned he wasn’t wearing a mask, but he was shocked and wanted to be professional, so didn’t say anything."